Explore a dynamic world of politics in this turn-based, political simulator. Create a character, run for political office, write legislation, balance budgets, and more as you move up the political hierarchy.
$14.99
Visit the Store Page
Early Access Game
Get instant access and start playing; get involved with this game as it develops. Learn more.
Most popular community and official content for the past week.  (?)
Update to Version 0.142
Jan 24
The game has been updated to version 0.142.

The Political Process
0
12
Questions About the Game
If you have any questions about the game, ask them here.
461

Verlumino
58 minutes ago
General Discussion
Update to Version 0.141
Jan 22
The game has been updated to version 0.141.

Improvements
- Improved the protégé next election menu so that it now includes party demographic information below each district.

Fixes
- Fixed an issue where pollution could become negative and possibly cause other problems.
- Fixed an issue where politicians would not vote for high school equivalency programs if free community college had become law.
- Improved Alabama congressional districts so that they are more accurate. Districts now include all of the correct counties, and party demographics have been adjusted slightly. 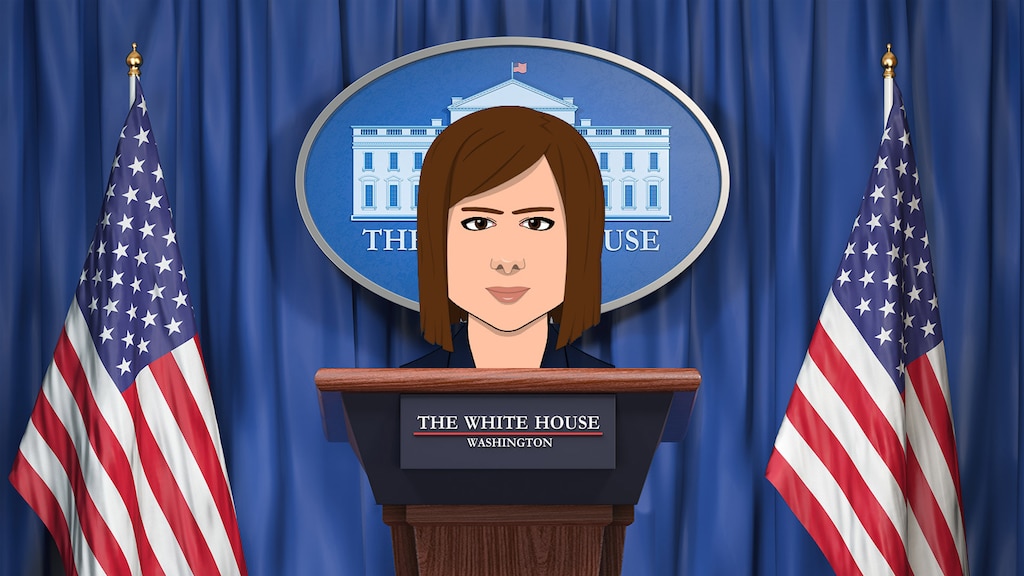 Menace
View artwork
Cannot load game?
So I already started a game and have put around 14 hours into it. However now whenever I try to play that same game the game refuses to load. The loading screen will pop up, but it just freeze until I just exit to desktop after a long time. Any ideas?
2

So, you want to win an election
You're running for office, trying to screw over help out your constituents through reforming the system, but that one pesky primary opponent manages to beat you, or maybe your ideological opponent manages to snag a few more % just when y...
5 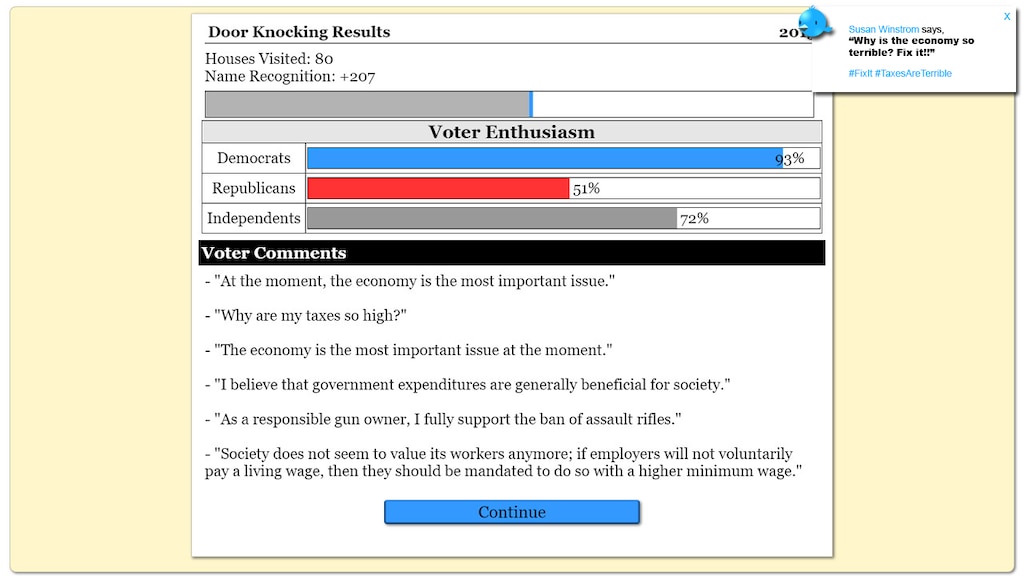 Recommended
16.3 hrs on record
Early Access Review
First of all I want to say that this is the best political simulator that I have played. Although the game is still in early access I very much enjoyed playing it. I only have some points that might be added in the full release like:
-Becoming VP.
-Serving in the cabinet.
-Mechanics relating to foreign countries. (Like becoming an ambassador for instance.)
-Maybe adding war or international conflicts.
-Making ads more effective in relations to how much money you spend.
(If any of the things above are already in the game but I have not come across them feel free to point them out.)

Recommended
34.0 hrs on record
Early Access Review
Honestly, for so many years I've looked for a game like this.

My only advice for the developers is please add more executive functions to the game. I want to FEEL like the President in the Oval Office, meaning military crises, international diplomacy, back channeling, domestic crisis events, etc. Please keep updating this it's amazing.

Recommended
2.5 hrs on record
Early Access Review
"THE ROAD TO POWER IS PAVED WITH HYPOCRISY."-Frank Underwood (House Of Cards)

MY OPINION:
The Political Process is not for everyone and most might find it boring... However I personally enjoy it and hope the full version gets released soon. I think these guys actually did their research when making this game, though let me state the obvious... IT IS A GAME. There's bound to be a few inaccuracy's because participating in real life politics is boring.

RATTLESNAKE & COPPERHEAD:
If you are into Political Games this sure is for you. When I first got into politics it was Netflix's House Of Cards that got me into it with it's leading protagonist/antagonist Frank Underwood. A charismatic & conniving politician that you just can't help but root for. Ever since then I've been looking for political games and this one is the most accurate I've ever seen.

POLITICAL R&D:
If you expect to do a political takeover within a week, don't. These developers sure did their research and I learned a thing or two just by playing 2-hrs of it at the time of this review. Everything you do takes time, a lot of time, time most people probably don't have when playing games. However if you have the patience and the mindset, this game can be fun for the majority of people who love political games.

THE POLITICAL PROCESS; NOT FOR EVERYONE
If you are interested in political games but find this boring I would recommend Plutocracy once the full version is released which is sometime this year.

NOT RATING THIS GAME:
Given the fact that this is Early Access I won't be giving it an official rating as I believe in judging the product as a whole and explore it's true potential rather than touching the surface and not even knowing what it's made of. So that being said, when the full version gets released I will pick my up my gavel and hand out my verdict swiftly. 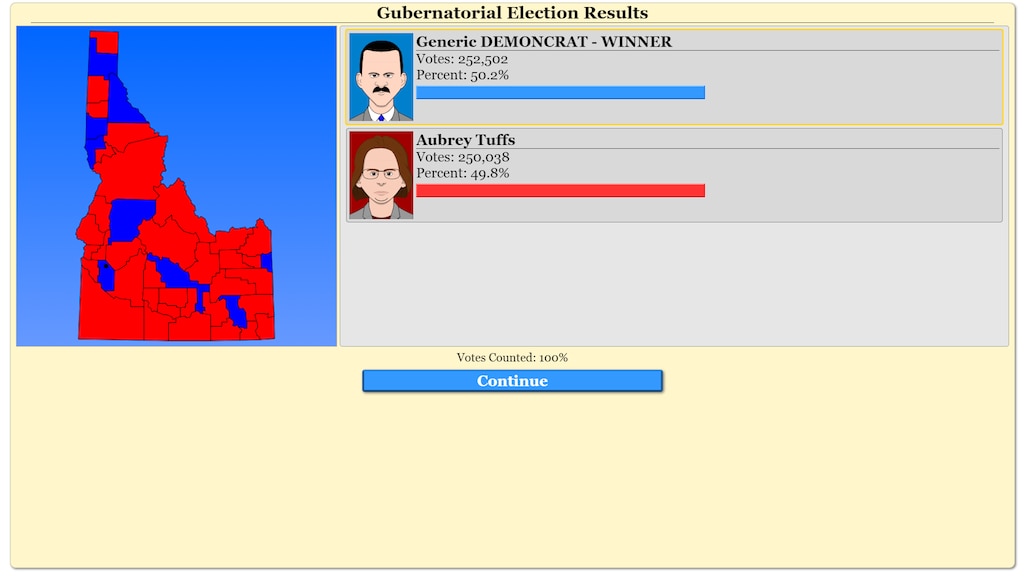 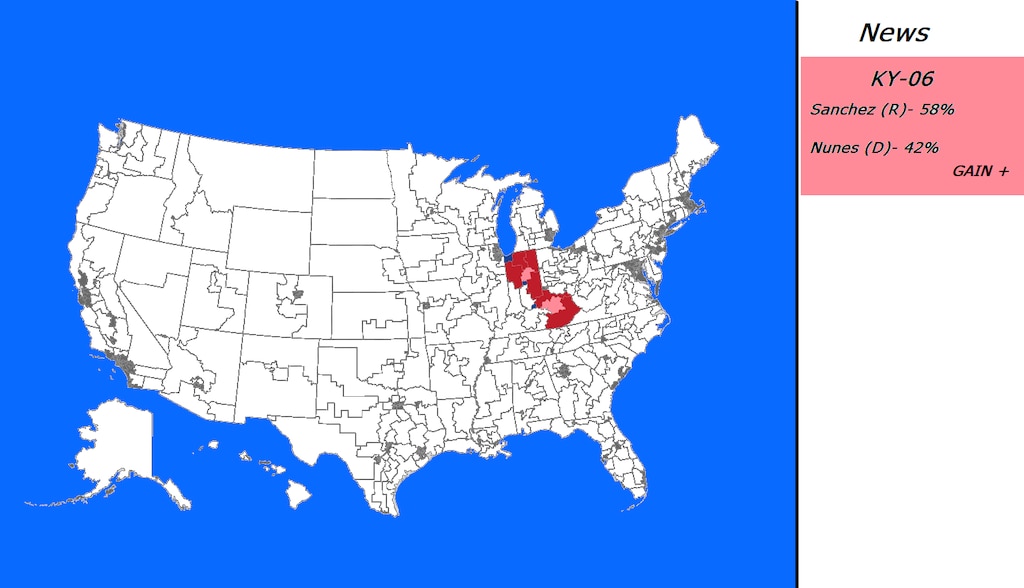 RobbRouth
View artwork
What features do you want most in a political/government simulator?
I want to know what features are most important to you. Respond in this discussion or feel free to start a new discussion. Thank you for sharing your ideas.
168

Verlumino
Jan 25 @ 5:20pm
Suggestions and Feature Requests
Upcoming Updates - Improving User Experience
I have provided a list of things I intend to add to the game in upcoming updates, related to improving the player's experience of the game. Please feel free to make any suggestions for things that you think would improve the player's experience. (I probab...
62

Verlumino
Jan 26 @ 9:25am
General Discussion
ram consumption
i play the game on linux through wine on my laptop that has 3 gb of ram and the ram consumption of the game constantly rises as my play session time increases to the point where it consumes all of my pc ram and entirely freezes (it happens after 2-3 hours...
1