Sea of Thieves offers the essential pirate experience, from sailing and fighting to exploring and looting – everything you need to live the pirate life and become a legend in your own right. With no set roles, you have complete freedom to approach the world, and other players, however you choose.
$39.99
Visit the Store Page
Most popular community and official content for the past week.  (?)
Sea of Thieves Season Two
Apr 15

With the seasons changing outside, Sea of Thieves is changing too as we enter a new Season of our own! New Events, ways to play and rewards are all coming with the release of Season Two, available now as a free update for all players on Steam.

Season Two comes free of charge to all players including 100 levels of rewards to be earned, with a purchasable Plunder Pass also available to boost the pool with additional premium rewards. As in the previous Season, you work your way up through the levels by living the pirate life, achieving things in your own way and steadily increasing your Renown. You can gain extra Renown by completing Trials: themed sets of Deeds that cover almost every imaginable action in Sea of Thieves, refreshed for Season Two!

Season Two Showcase
The Forts of Fortune have arrived, marked by an ominous new form of Skull Cloud looming in the skies over the Sea of Thieves. These encounters provide an even more rigorous challenge than other Skeleton Forts, with extra explosive potential and ever fiercer foes as the waves of resistance keep coming. Guaranteed Athena’s Treasures and other high-level loot await any crews who can conquer this gauntlet. If you fancy your chances against the undead hordes, keep an eye (and ear) out for the tell-tale signs of this rare encounter emerging as you sail!

Should you prefer trade to battle, Season Two also brings in new Merchant Alliance Trade Routes. Emissaries can earn their fortune by buying Commodity Crates as cheaply as possible at Outposts, then selling them at another Outpost where those Commodities are highly sought-after. The Merchant Alliance now sell Resource Crates too, so stocking up on bananas, wooden planks and cannonballs has never been easier! 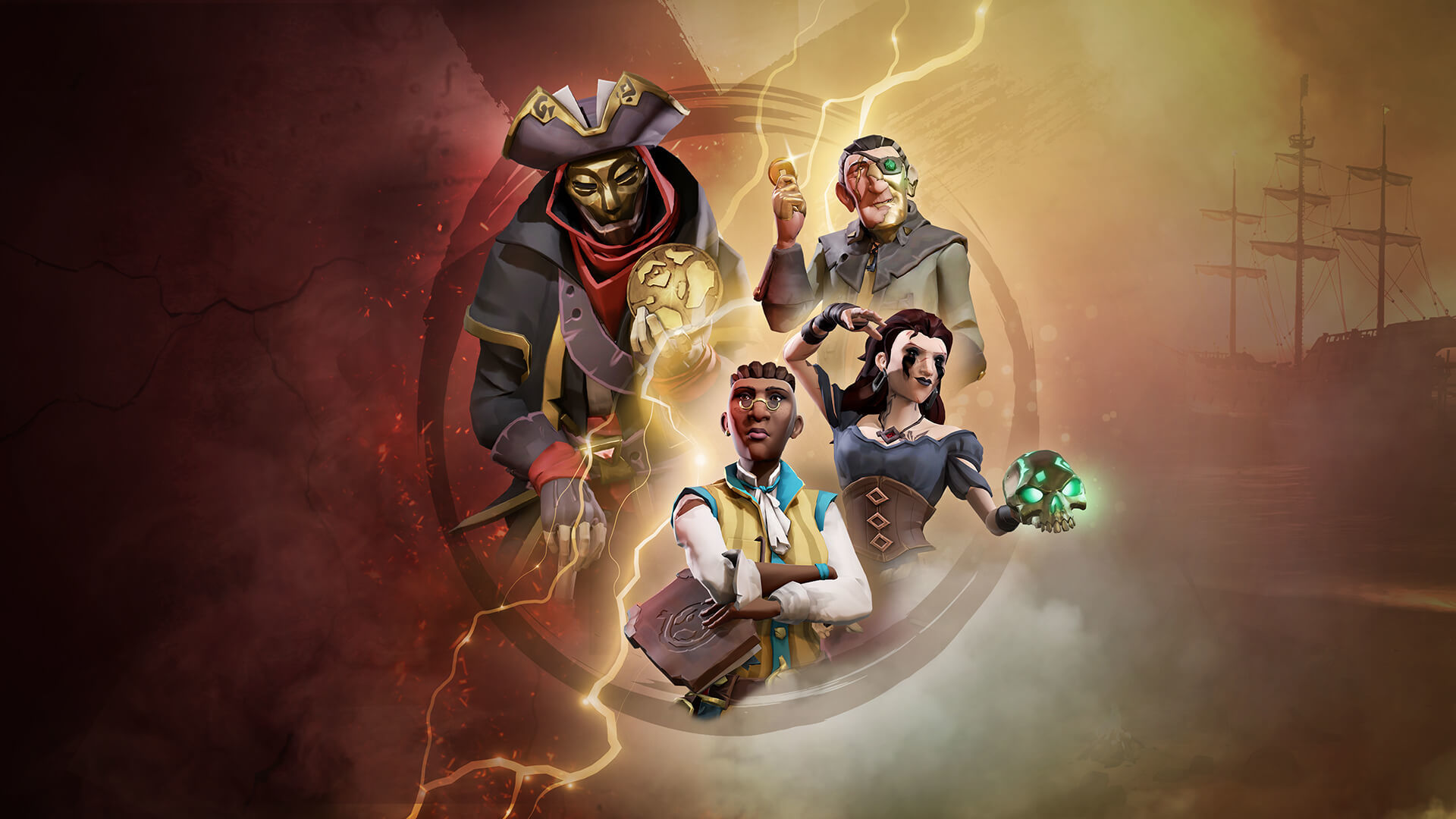 To attract more pirates to their cause, the Trading Companies are rolling out brand new rewards for those Emissaries who place highly in their Emissary Ledgers. Not an Emissary yet? They’ll send out a Mysterious Note when you’re eligible to purchase their Emissary Licence and set sail under their Flag.
All this along with Season Two’s dramatic time-limited Event, Reapers vs. the World – pitting The Reaper’s Bones against the other Trading Companies in an epic game of Emissary cat and mouse – and more Twitch Drops on the horizon from our Sea of Thieves Partnered streamers!

Pirate Emporium Plunder
With a new Season comes a new Plunder Pass, packed with Pirate Emporium items to boost the pool of rewards available via Seasonal progression. Picking up the Plunder Pass adds these premium items to the obtainable rewards for Season Two, including unreleased items like the Black Phoenix Figurehead, Sails and Flag, along with the Popcorn and Backflip emotes. For those looking to hit level 100 this Season, the Plunder Pass is an enticing accoutrement to your adventures! 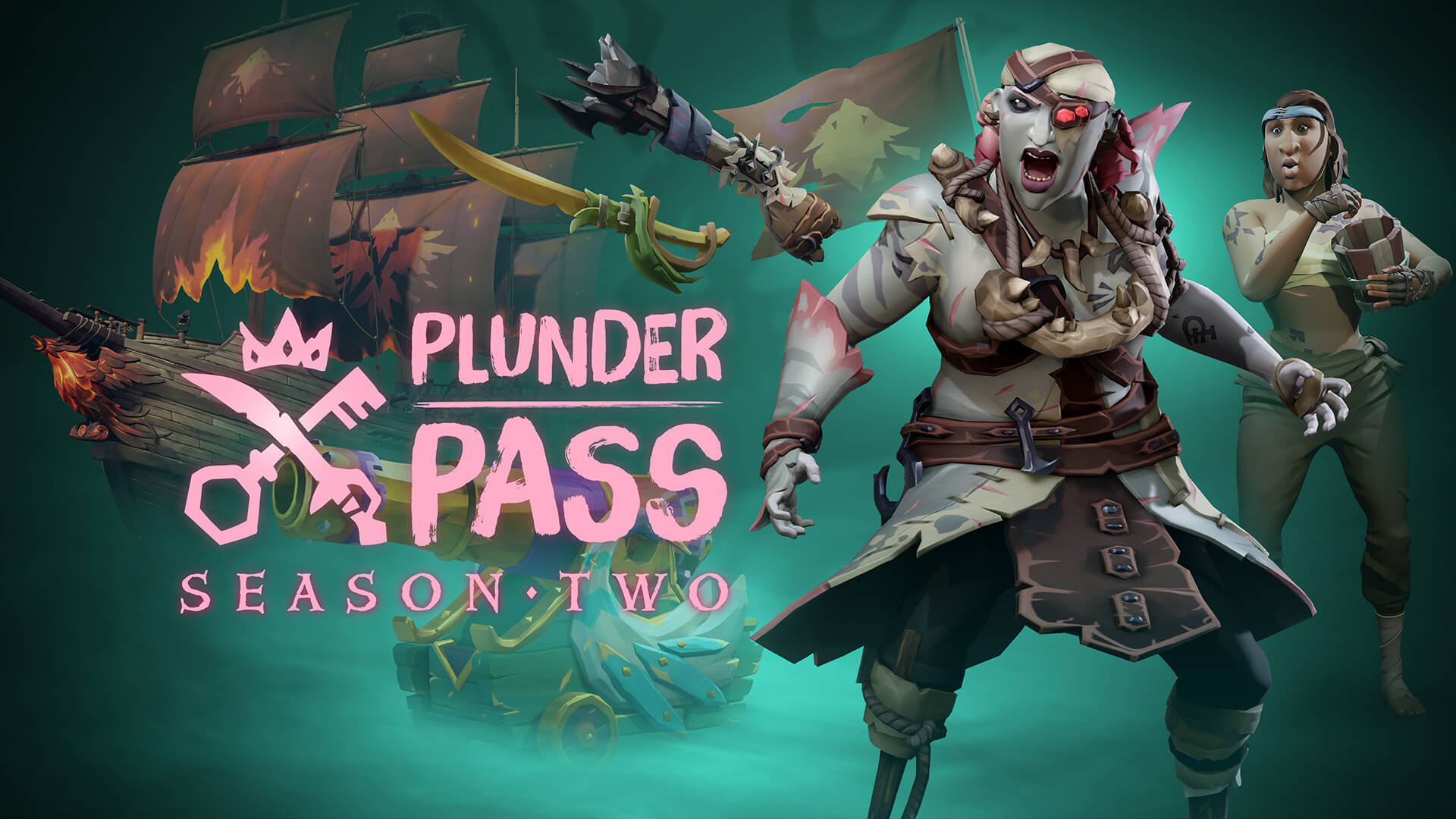 Also new to the Pirate Emporium this month: the opportunity to strike fear into all who sail the Sea of Thieves with the Dark Warsmith collection, comprising a full ship set, a terrifying all-in-one pirate costume and a bundle of red-hot weaponry. Players who want to show off their skills with a blade can do so with the new Dagger Tricks Emote Bundle, but remember – our pirates are trained professionals, don’t try this at home! 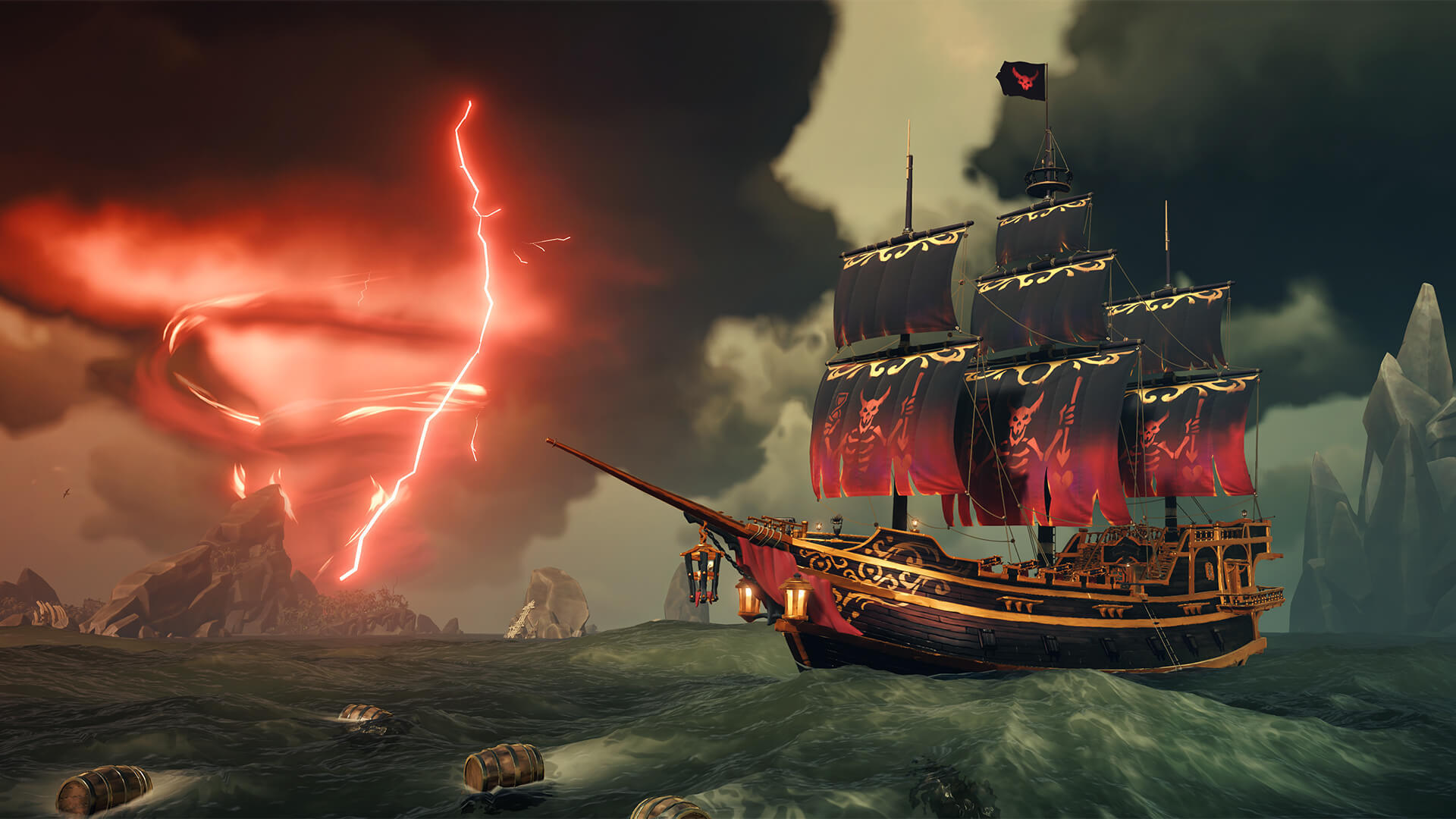 Sea of Thieves
1,136
77
not for me
got the game from a buddy as a gift. Initially i thought it was pretty fun, but the players are literal trolls. for a new person, this game is not worth it... its clear the noobs are just targets to endlessly troll. Cant scuttle the ship, fast enough and just repeat dying on your ship while the rest of the pvp ♥♥♥♥♥♥♥♥ clear your deck of an hour or 2 of loot searching. lame, clunky combat, fov is way to narrow at 90, only 1 mob type, no balance for less than 3 players. Terrible imo....
12 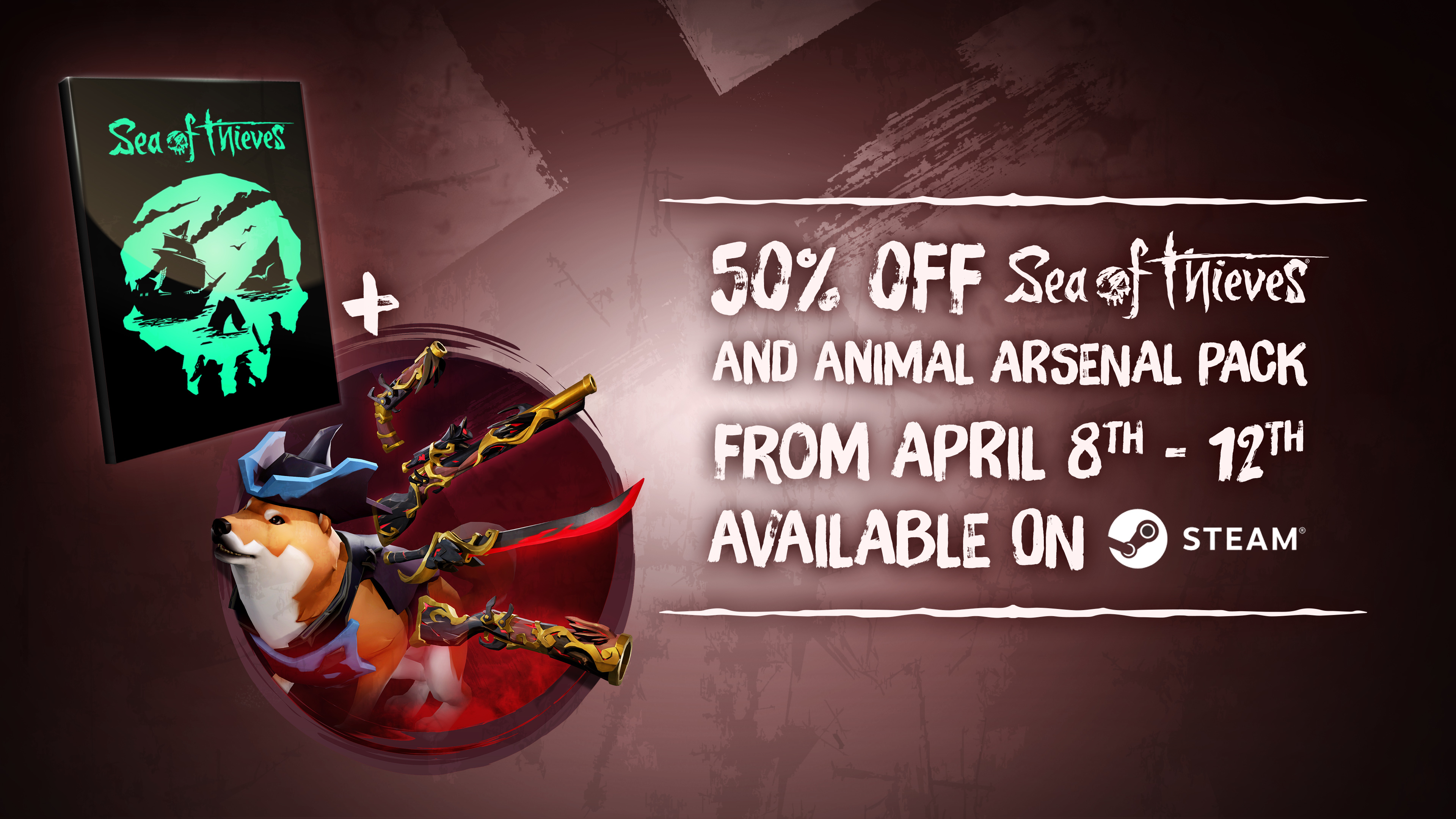 Sea of Thieves is 50% off on Steam from April 8 to 12, and players who purchase the Sea of Thieves: Animal Arsenal Edition will receive a pack of goodies to help them get started on their pirate adventure. This time-limited Animal Arsenal Pack includes the Reaper’s Heart Weapon Bundle for all those passionate privateers out there, an excitable Coral Inu pet to be the ship’s first mate and certified good boy (or girl), and a dashing Inu Kraken Outfit to dress them up in. 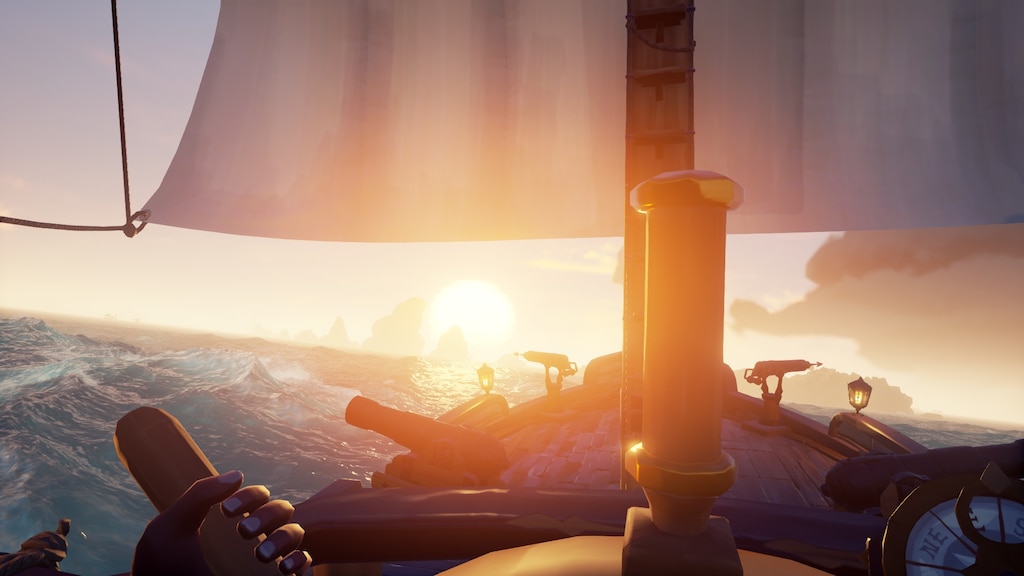 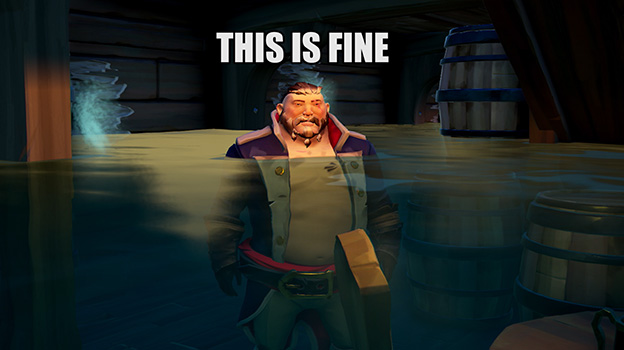 how to spawn camp people
you must first find a volcano there's a place called devils ridge with a bunch of them you need to go over there then find a active one and let it sink your ship then you can exit the game then click the gear and click uninstall never come b...
133 ratings

Recommended
15.6 hrs on record
First person pirate game from rare. It does have it's hard moments. Thankfully death really isn't that bad.. you can try to see if a mate can res you or you get taken to a ghost ship to wait for a 20 second respawn timer. If your ship is lost you can get it back with a helpful mermaid. Has a flintlock, blunderbuss, and a early version of a sniper, plus your sword. Ships have cannons with multiple shot types, harpoons, etc. Plenty of playful pets. 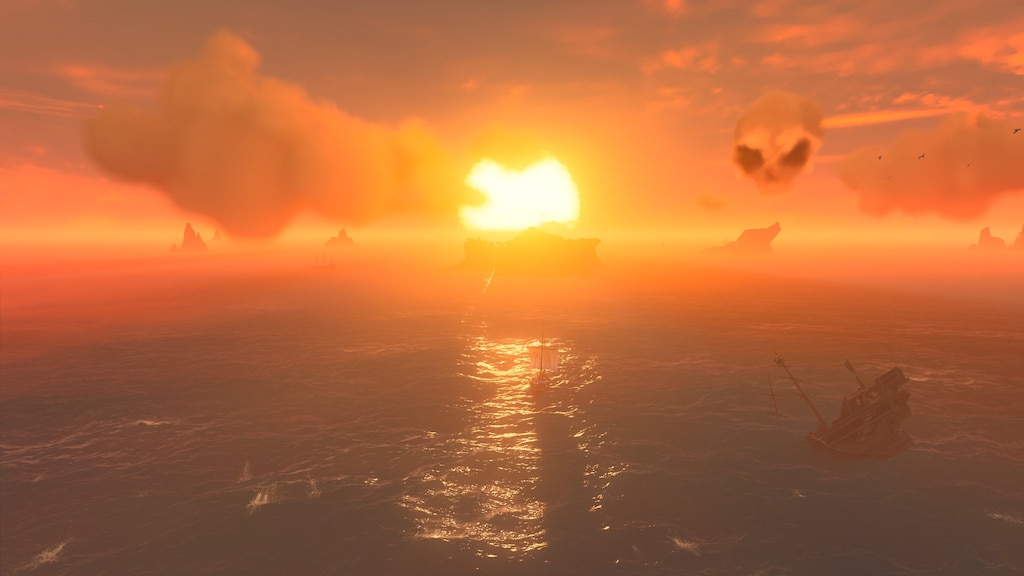 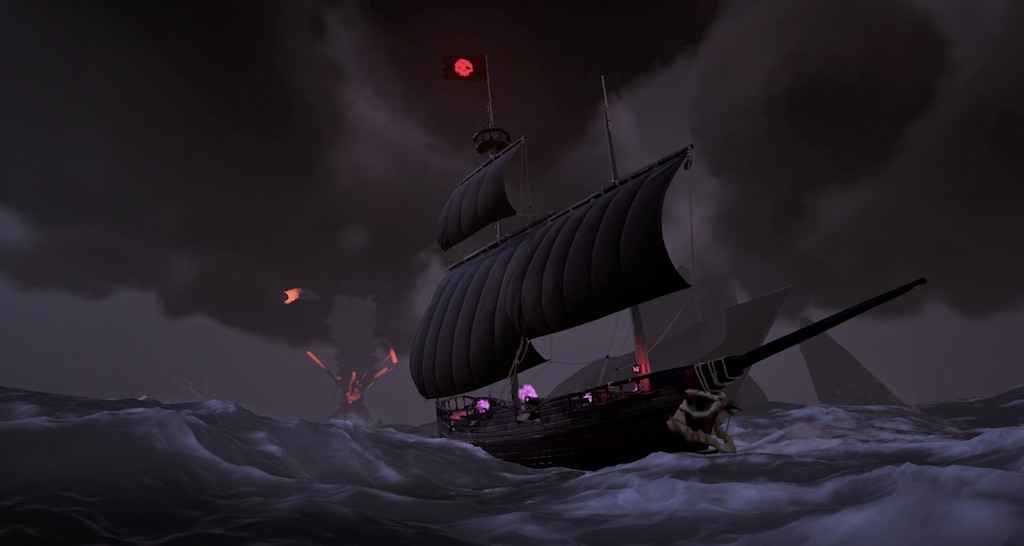 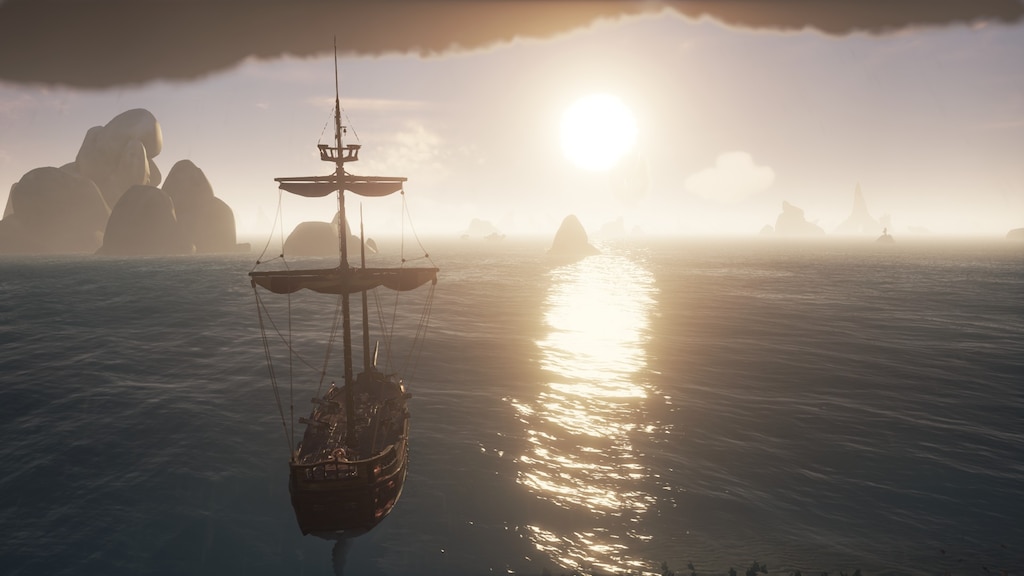 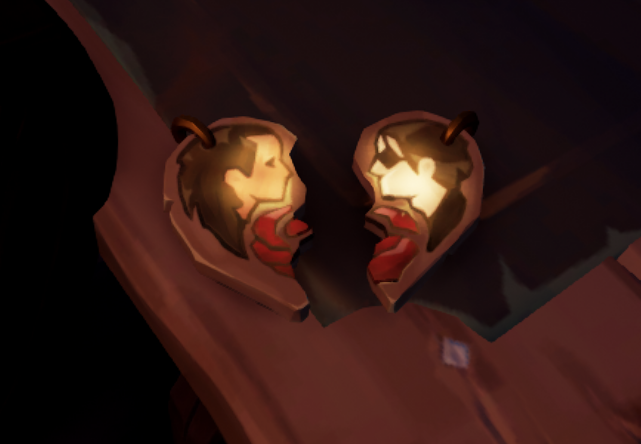 Recommended
36.3 hrs on record
Sea of Thieves is an enjoyable pirate theme multiplayer game with a great adventure and open world experience. A simple open world game where you set sail with your friends or strangers into the open sea full of mystery and danger, doing the quest and contract from hunting legendary loot to battle the group of ghost pirates.

The game is focus on PvP, where other players team can kill you and steal your loot, or attack you as they wish to do so at any moment, but while I don't like the PvP game myself, this game however, manage to balance both Co-op and PvP aspect well enough that I have fun with it rather than feel competitive or feel threatening all the time.

There is something unique about this system that make it different than many other PvP games. You can try your best to make friends and risk getting kill or suddenly become someone best friend at instant in this world full of backstabber and uncertain among the pirates. But hey, it name "Sea of Thieves" after all right? :P

Here are the quick list of what I love and also dislike in this Sea of Thieves.
What I love:

♥ Teamwork and Co-op element. Communication and teamwork is the key, and it wonderful to see people working together here

♥ Beautiful Open World. Warm sun and sea while still hold the mystery over the horizon.

♥ Treasure Hunting. Small puzzle and observation skill that feel reward when you found it.

♥ Educated Information. Basic sailing knowledge, problem solving and so on, I learn many things in this simple game.

♥ Cute Pets. Such a wonderful sight seeing them interact with you or act around you in a very cute way.

- Ton of Unexplained Information. Lack of explanation in many element of the game.

- Limited Customization. Doesn't have much customization when it come to characters or a ship.

- You can shoot your pet into the sea with ship cannon, that is such a mean thing to do. :P

Sea of Thieves can be enjoy alone or with a group of friends. It is fun for everyone in all ages, and also a great game to be playing with family or friends. And don't worry, if you are alone, this game do have an option for you to join up with other people which is also can be fun online Co-op as well. I recommend it to anyone looking for an enjoyable online adventure experience. :D

Aye! Me matey lot of gold and booty. Come plunder the sea lads and lassies with me party!

KripperCZ
View all guides
Is Crossplay Working?
I have a friend who has this game on the Microsoft's store, and no matter what we try we can't invite each other or party up.
12 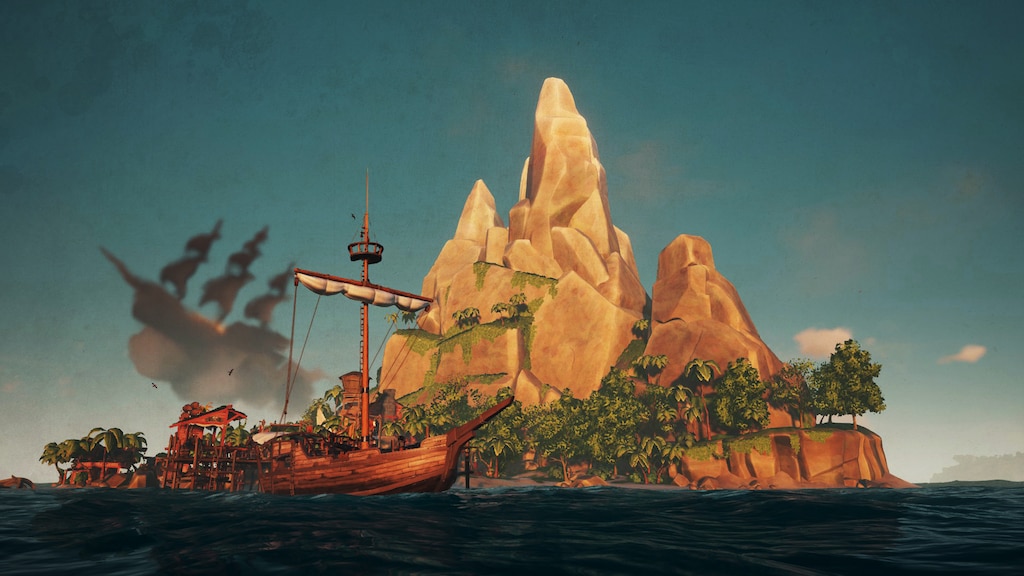 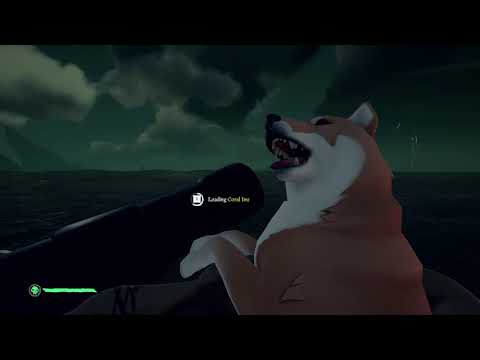 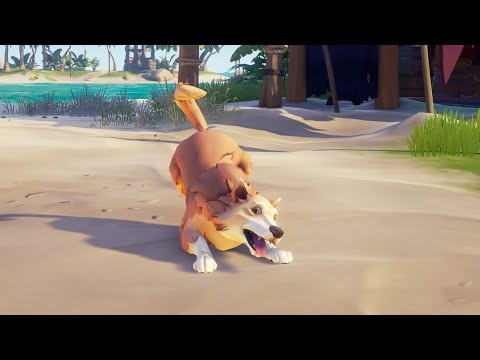 0
1
A doge casually pees in the air

Ship talk & Ship stats for beginners
This guide is to help people who are learning ship talk, by trying to look cool or trying to understand their fellow shipmates 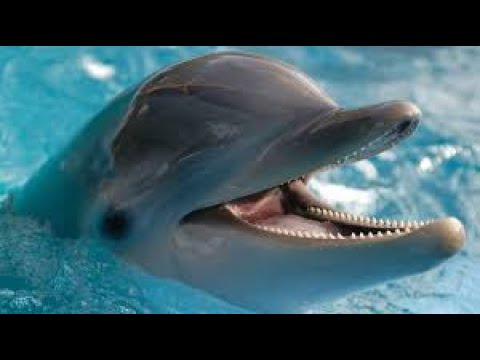 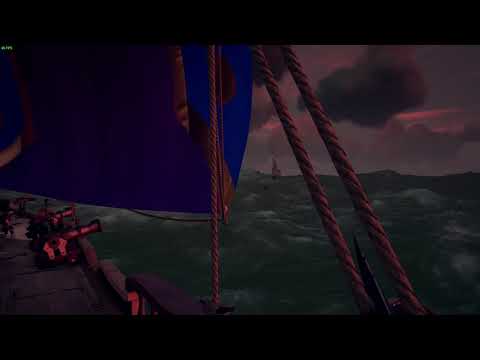 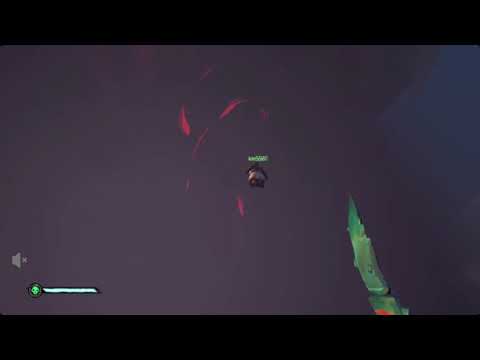 0
0
Do NOT swim into the light

This weekend marks three years since Sea of Thieves made its maiden voyage, and what a journey it’s been! Since our launch back in March 2018, over 20 million pirates have begun to chart their own tales of high seas adventure, and we couldn’t be more grateful. From everyone at Rare, we’d like to say a big thank you to everyone who has joined us on the Sea of Thieves journey so far – 2021 is looking to be our biggest year yet, so stay tuned for more! 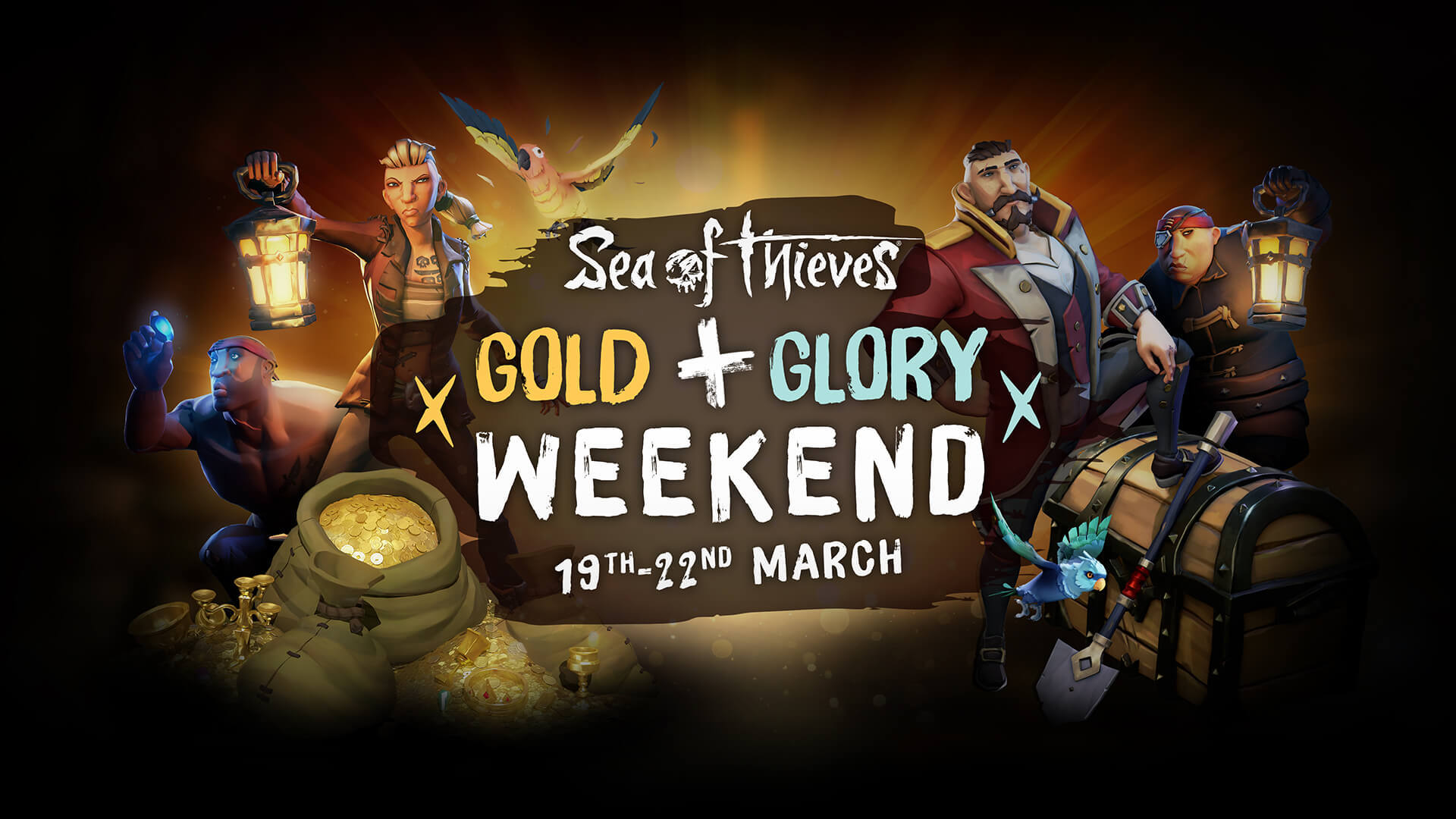 And now to the festivities. To thank everyone for their support on the occasion of our third anniversary, we’ve got a chest full of goodies and bonuses:

• We’ll be running a special Gold and Glory Weekend from March 19 (00:00 UTC) to March 22 (23:59 UTC), where you can not only earn double the gold and Trading Company reputation but extra Seasonal Renown too!

• Grab the final set of Season One Twitch Drops by tuning in to any of our Sea of Thieves Partners between March 19 and March 23. You can pick up the remaining Gilded Phoenix equipment as well as the all-new Hornpipe Dance Emote for those looking to dance a merry jig.

• If you want to dive into the backstories of some of Sea of Thieves’ main characters, the first free issue of our latest Sea of Thieves Origins comic miniseries is available on comiXology[www.comixology.com] now – focusing on the exploits of Sir Arthur Pendragon as he forges his name as the Champion of Souls.

• Our final update to Season One also goes live today, teeing up a brand new Vault Raiders Event (starting March 25) and introducing new wonders to the Pirate Emporium including a free ROFL Emote and this weekend’s grand anniversary Emporium sale! 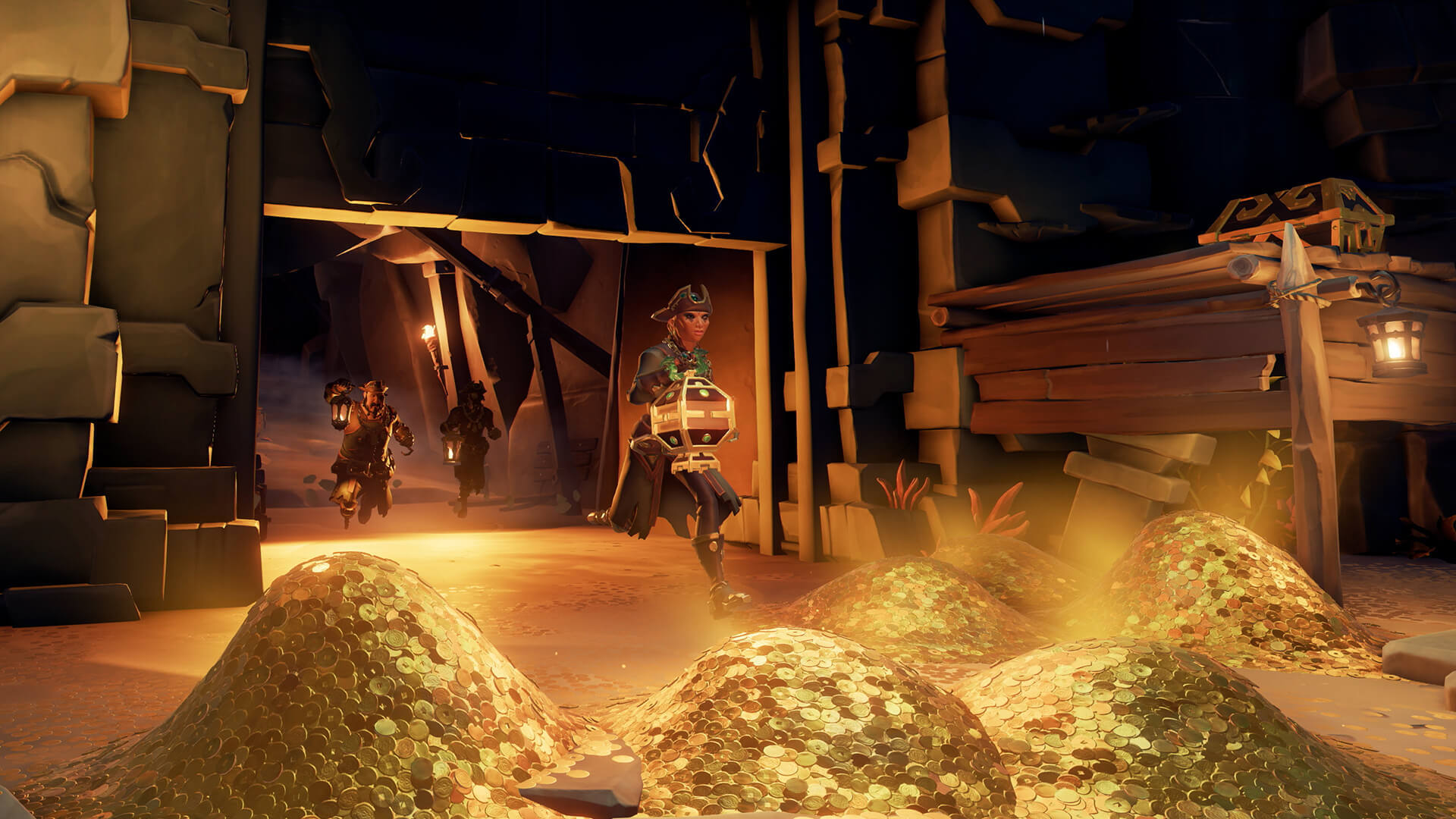 Thank you again to all the players who have joined us on our journey so far. We wouldn’t be here without your support and we can’t wait to show you what we’ve got coming in the rest of 2021. See you on the seas!

Sea of Thieves
1,820
81
FOV +
This game is great.. but it is ruined by the fact you can't change your FOV past 90.. 90 in this game is way too narrow especially for higher resolution monitors. I've tried everything and find it hard to play this game or recommend it to people due to this simple issue. I think allowing it to go up to at least 120 (by your guys' scale) would make the game all the better!...
4

Ϯ-=(LW)=- « Côbrä » Ϯ
1 hour ago
General Discussions
Become a legend, but did not get cursed from 1 season
Hello, guys. I fully unlock first season. reached 100 lvl of battle pass. but I bacame the legend in season TWO. and i cant find cursed for eye. why i didnt got it? same with sworld on lvl 46 of battle pass season Two I bacome a legend later then reach battle pass lvl 46. also this sworld not unclocked. the system works by this way? or I missed something...
4