Become a crew member of an interdimensional express! Discover a new mysterious world inhabited by amazing creatures, dangers and surprises. Upgrade your train, gather new materials and build better weapons! Available in single player, or in online multiplayer with up to 4 people.
Visit the Store Page
Most popular community and official content for the past week.  (?)
Play New Demos by HypeTrain Digital – Steam Game Festival
Jun 16, 2020
Hi!

We’re delighted to take part in the Steam Game Festival (June 16 - June 22), which is already live now! Throughout the event we've brought demos for each of the 8 games we are currently working on. 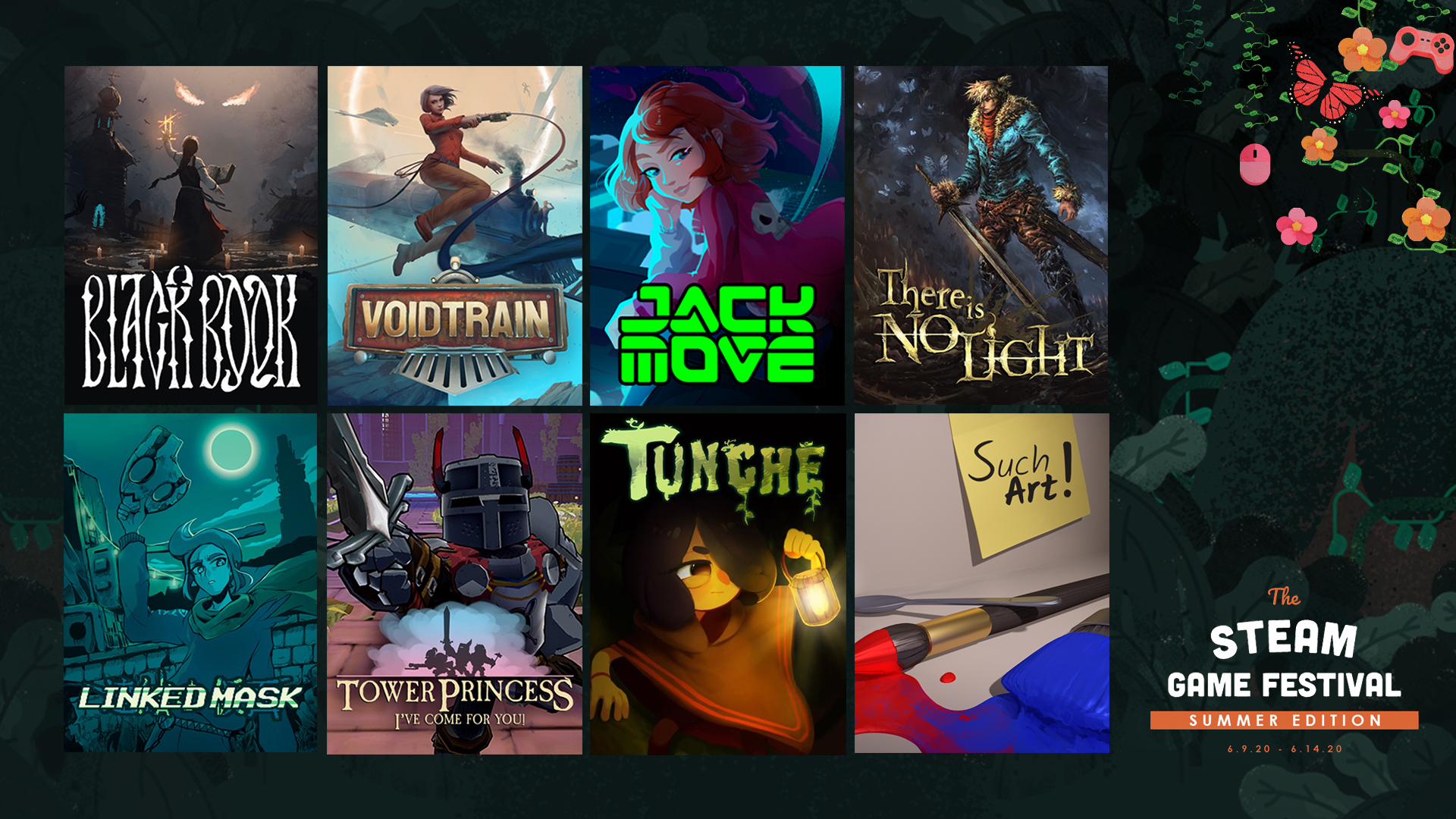 All of them are in different genres, settings and styles. You will surely find something that piques your interest! All the content available for Steam Summer Festival is free, some demos are long, some allow infinite play. Here is a little sneak peek of every title available.

Voidtrain is a first-person action/survival game where you become a crew member of an interdimensional express. Build your own train, upgrade it, craft weapons and travel across different mysterious worlds full of outlandish creatures, Nazis and other dangers.

Voidtrain’s demo features a base loop of the game, where you’ll be able to travel between biomes on your train, gather resources to upgrade it and stop by interdimensional train depots filled with Nazis ought to be defeated.

Tunche is a charming, hand-drawn beat'em up hack and slash game with roguelike elements, co-op and a pinch of shaman witchcraft. Visit the amazonian jungle alone or together with your friends, choose one of the 5 unique characters and hack through hordes of enemies!

And if you like A Hat in Time, we got a big surprise for you — Hat Kid will be the 5th Playable Character in the game. Moreover, you’ll be able to test her in the demo!

Do you miss the golden era of Game Boy? Linked Mask is a 2D platformer that will make you reminiscent of the good old days, where a player has to overcome six towers, collect six masks containing elemental powers and ultimately conquer the Castle of the Primals. And there’s a chillingly cool soundtrack that will make your head bop as you traverse the deadly Towers!

Plunge into a VHS-era cyberpunk world of Jack Move, an RPG featuring japanese style turn based battles and gorgeous Hi-Bit pixel art. Take on the role of Noa, a vigilante hacker who is thrust into a world of murder, kidnapping and dark research after her father goes missing.

There’s a brand new demo of Jack Move available that features a new slums area, a new dungeon and a whole bunch of new enemies for you to tangle with.

Black Book is a dark RPG Adventure based on Slavic mythology and featuring card-based combat. You will take on the role of Vasilisa, a young sorceress on a quest to revive her beloved one. In order to do so, she has to uncover all the 7 seals of Black Book — a demonic artefact, said to be powerful enough to grant any wish.

The demo features an essential part of the story — the First Day of Vasilisa becoming a witch. You’ll be able to test test the core game mechanics, battle regular demons and even test your strength in a fight against a boss.

There Is No Light

There Is No Light is a pixel-art action adventure in a dark post-apocalyptic setting, which tells a story of a protagonist fighting against a fallen underground civilization and its appalling religious rituals.

In this demo you’ll be able to explore a small part of the game world. Visit a village, the existence of which remained unknown for a long time. Find out how people live in the underground world ruled by the Church of the Great Hand. Find your own playstyle by combining 3 available weapon types, so that eventually you can fight a giant boss Behemoth that gets in your way to freedom.

Tower Princess is a 3D roguelike action platformer where you'll have to beat a dungeon, defeat a dragon, rescue a princess/prince and manage a perfect date with them! There’s a wide variety of royalty members you can hit on — you’ll be able to find someone you like even if you’re not into humans.

The demo is a linear and brief sample of a run in one of the Castle's areas. It shows the visuals and the core gameplay of Tower Princess, but it's focused on the princess aid in combat, as without her help, you wouldn't stand a chance against the Evil Dragon. Are you ready to test yourself as a knight in shining armour?

SuchArt is a painting sim game featuring you being such an amazing artist. Really you rock, your latest DNA test is very positive about it. Now please paint, sell and expose your art from your new studio aboard the Space City. And don’t forget — the only limit is the size of your brush (or a flamethrower).

SuchArt demo features a separate room (a virtual studio instead of a real one you’ll get in the full game) with a limited amount of tools and an introductory part of the story. However, you’ll be able to test the core game mechanics and take a couple of commissions from virtual clients, which is already fun!

Voidtrain
386
22
MY GOD, THIS GAME LOOKS AMAZING
Dude, I love steampunk era for a lot of reasons, but nowadays I can only see cyberpunk and medieval theme, which isn't as good as steampunk. Watching the trailer, feeling the comfortable moment, walking simulator, peace and quiet... And then, the sound of gear moving, steam whistle, and parts crackling... And then the exploration and combat, and flying fish while swimming in air... DAMN, that game feels and looks wonderful....
35

D.A.R.K.
Nov 25 @ 9:08am
General Discussions
Was going to buy this but now it's going in the ignore developer list.
Enjoy that epig cash.
197

:)
Oct 26 @ 12:20am
General Discussions
Release date cancelled
Game has been so trash talked on Steam, dev removed the release date ... Expect us to add this EPIC Exclusive in our wishlist. Ha, good joke, dev, but you burned that bridge last year!
64

Infected Ronin
Sep 19 @ 9:49am
General Discussions
Kinda confused here about last news
Hard to pick short and objective answer because people here tend to write paragraphs about Epic So, in short - is this game cancelled from Steam or we are not sure now?
16