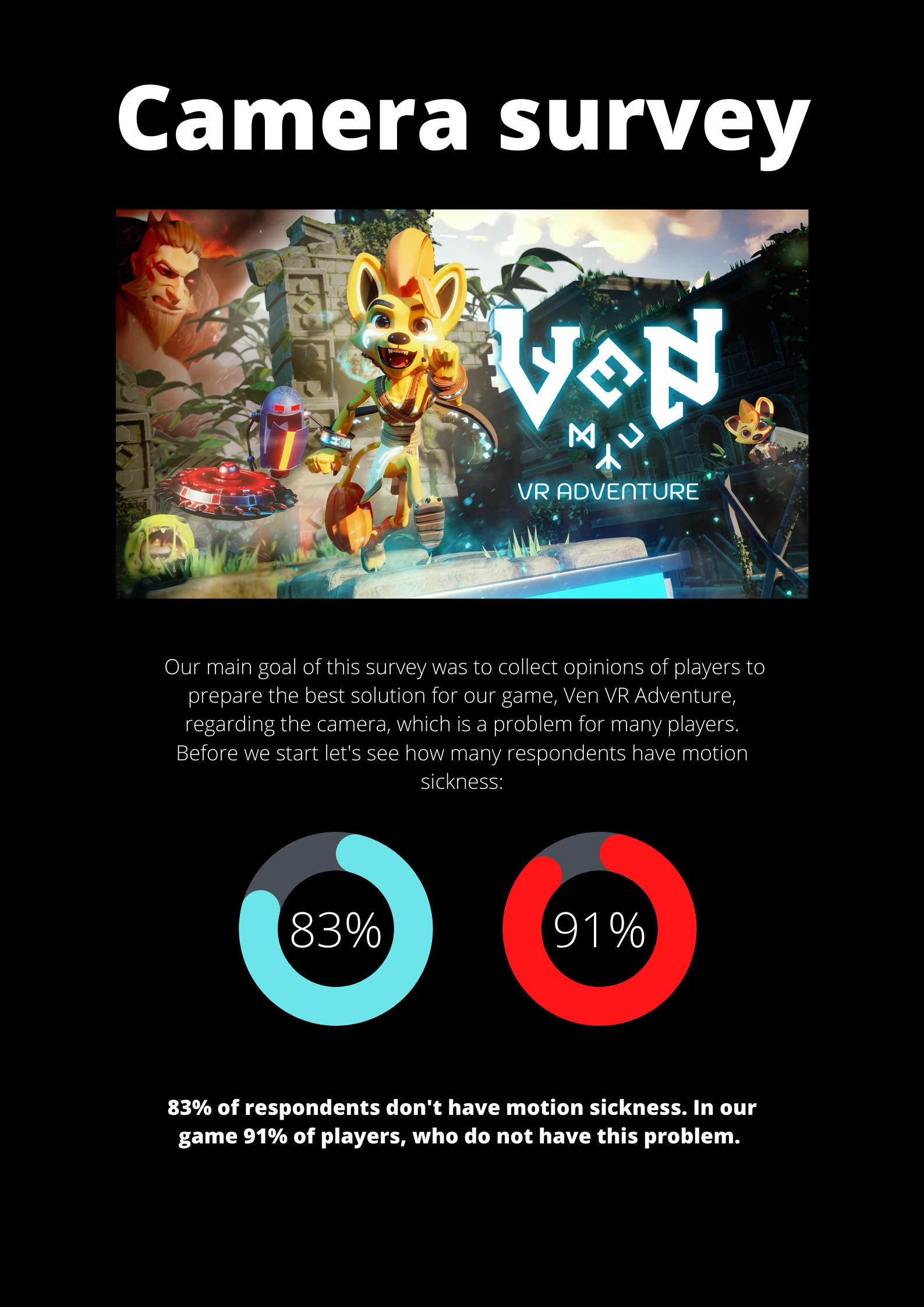 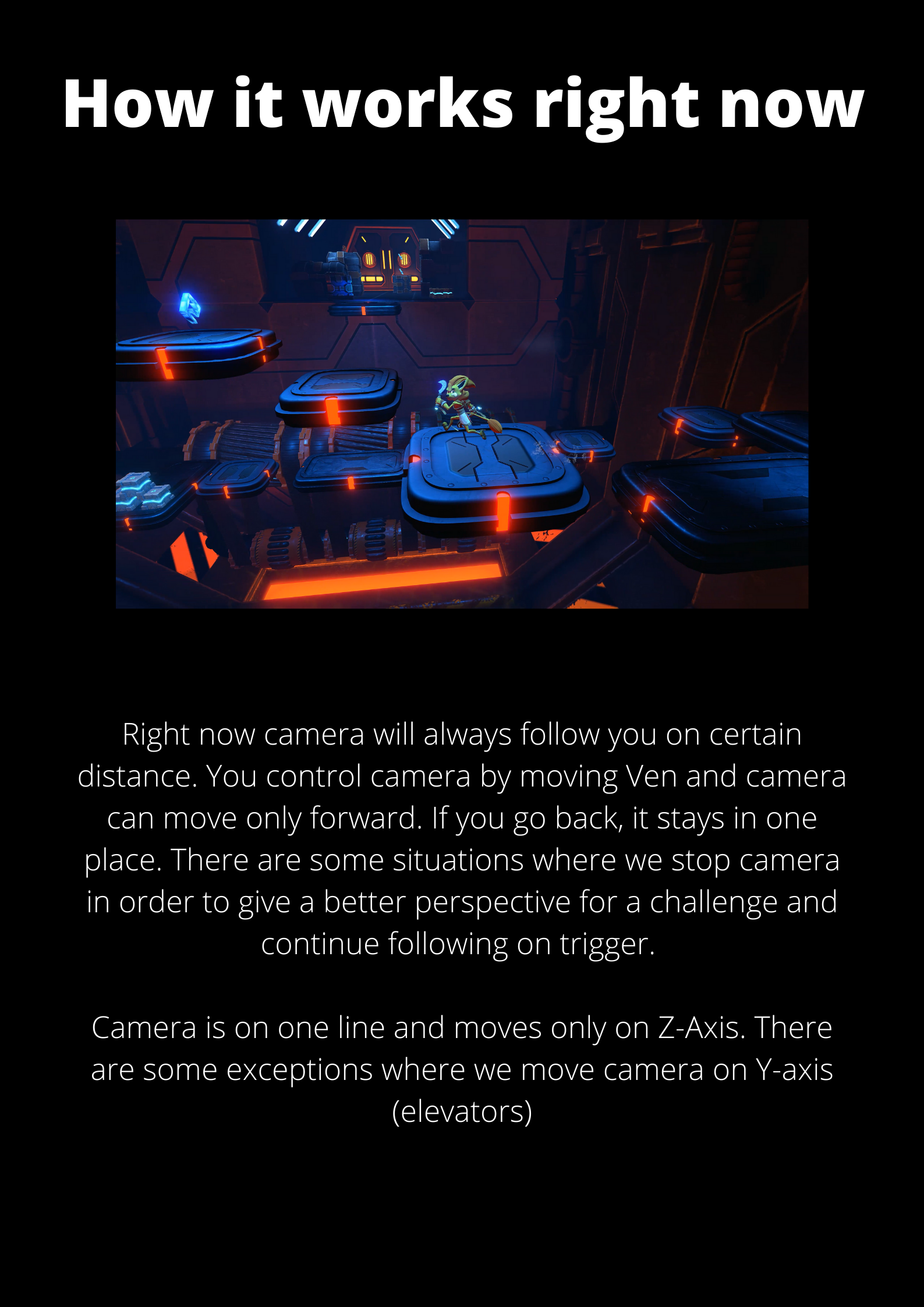 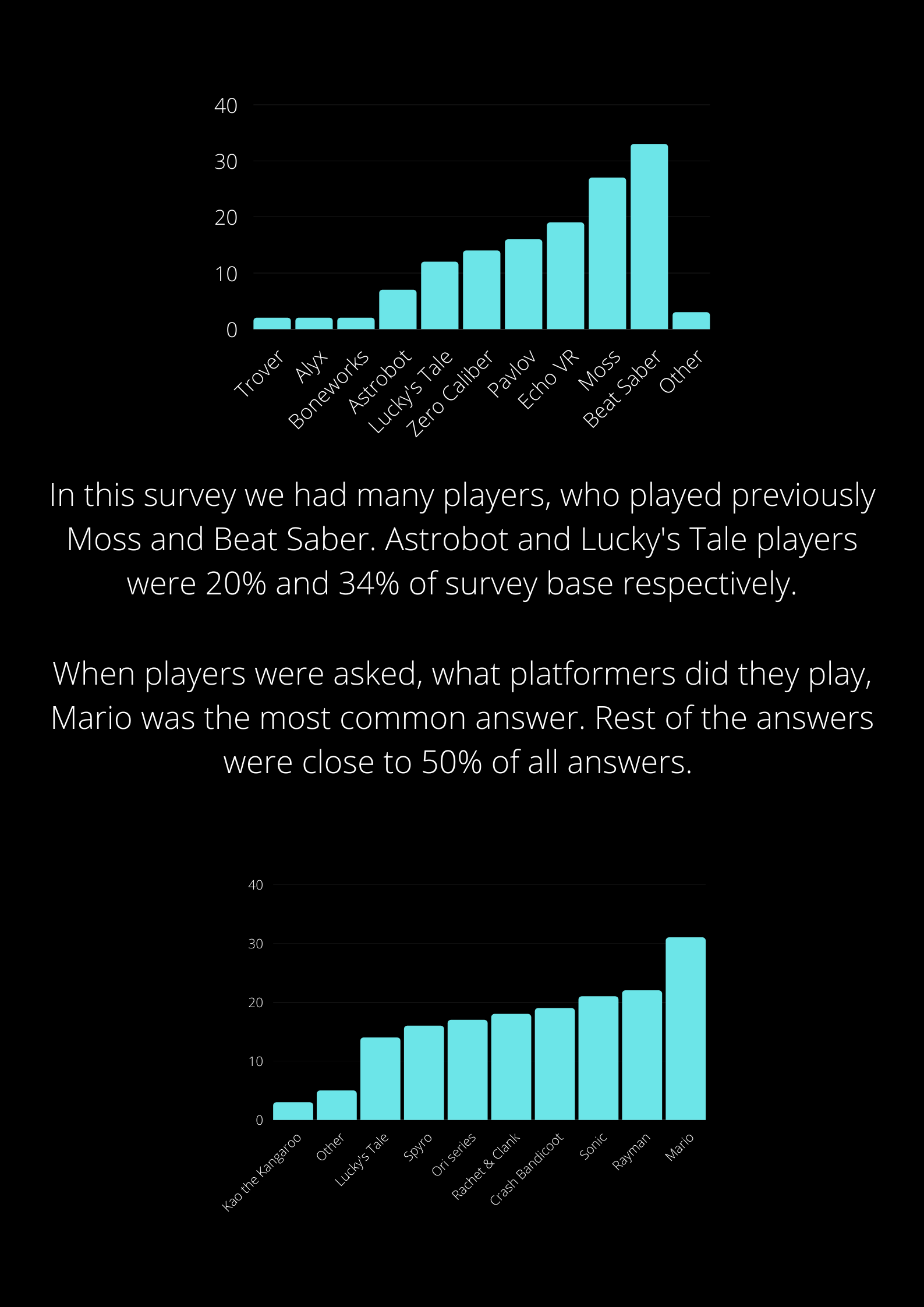 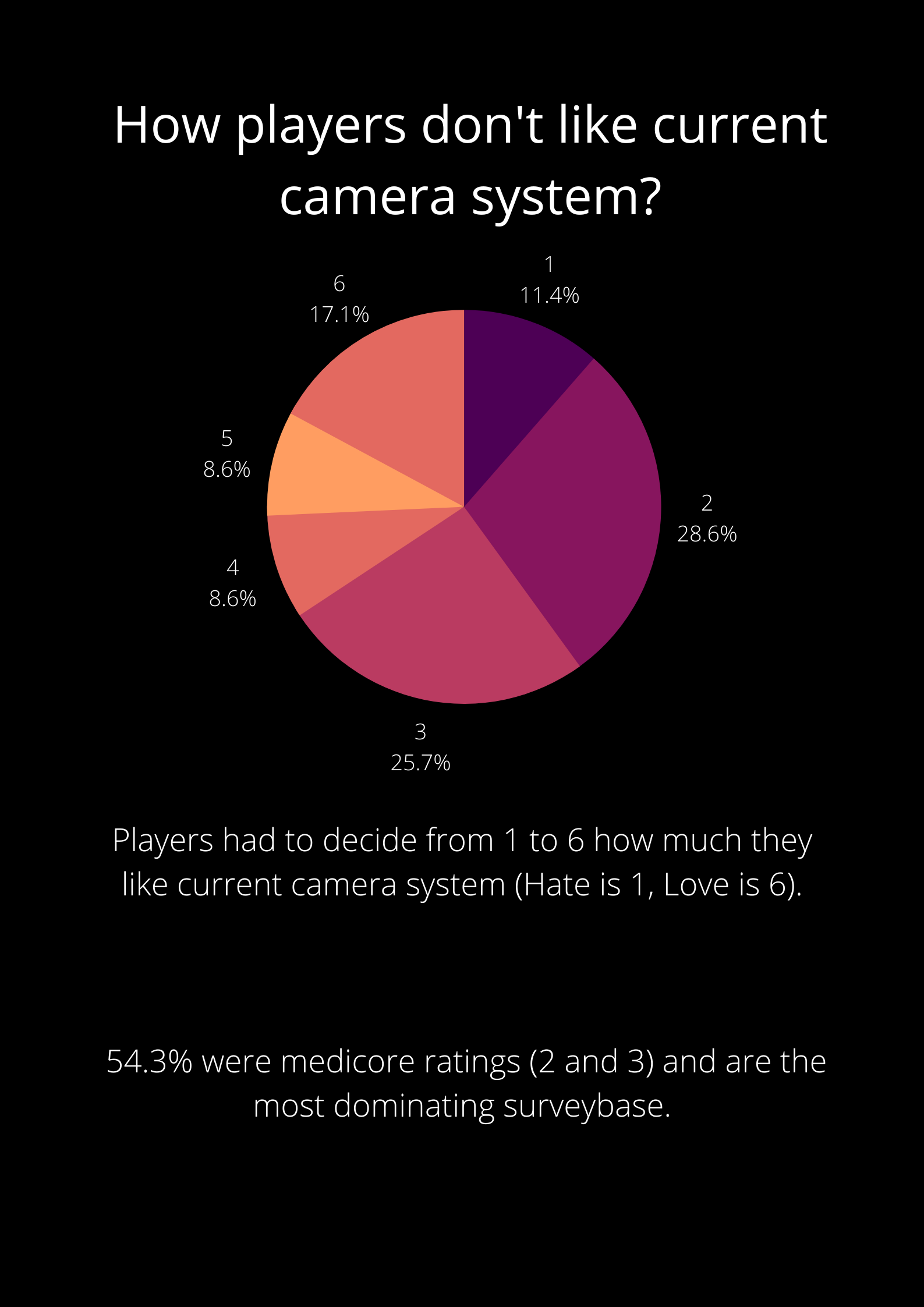 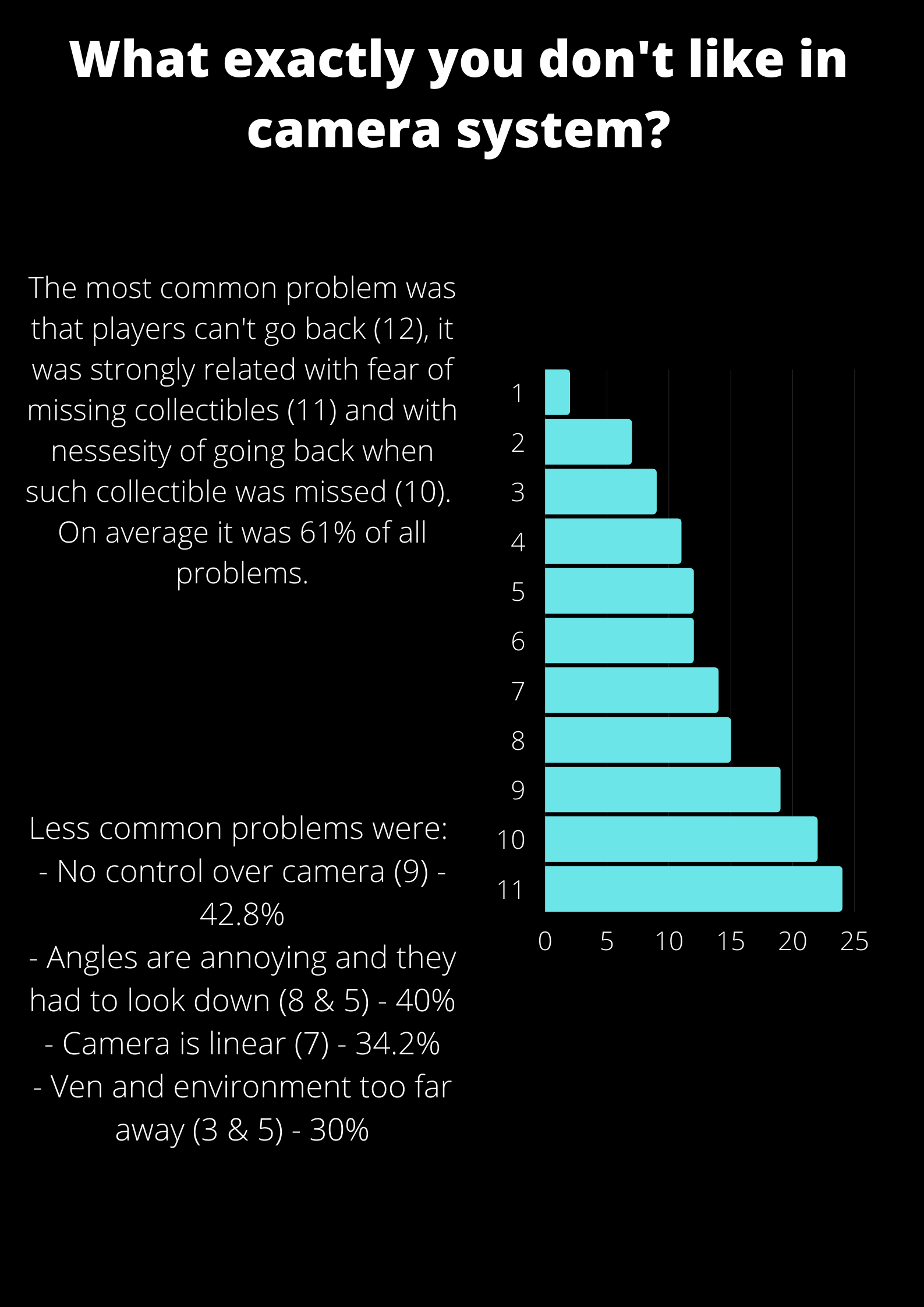 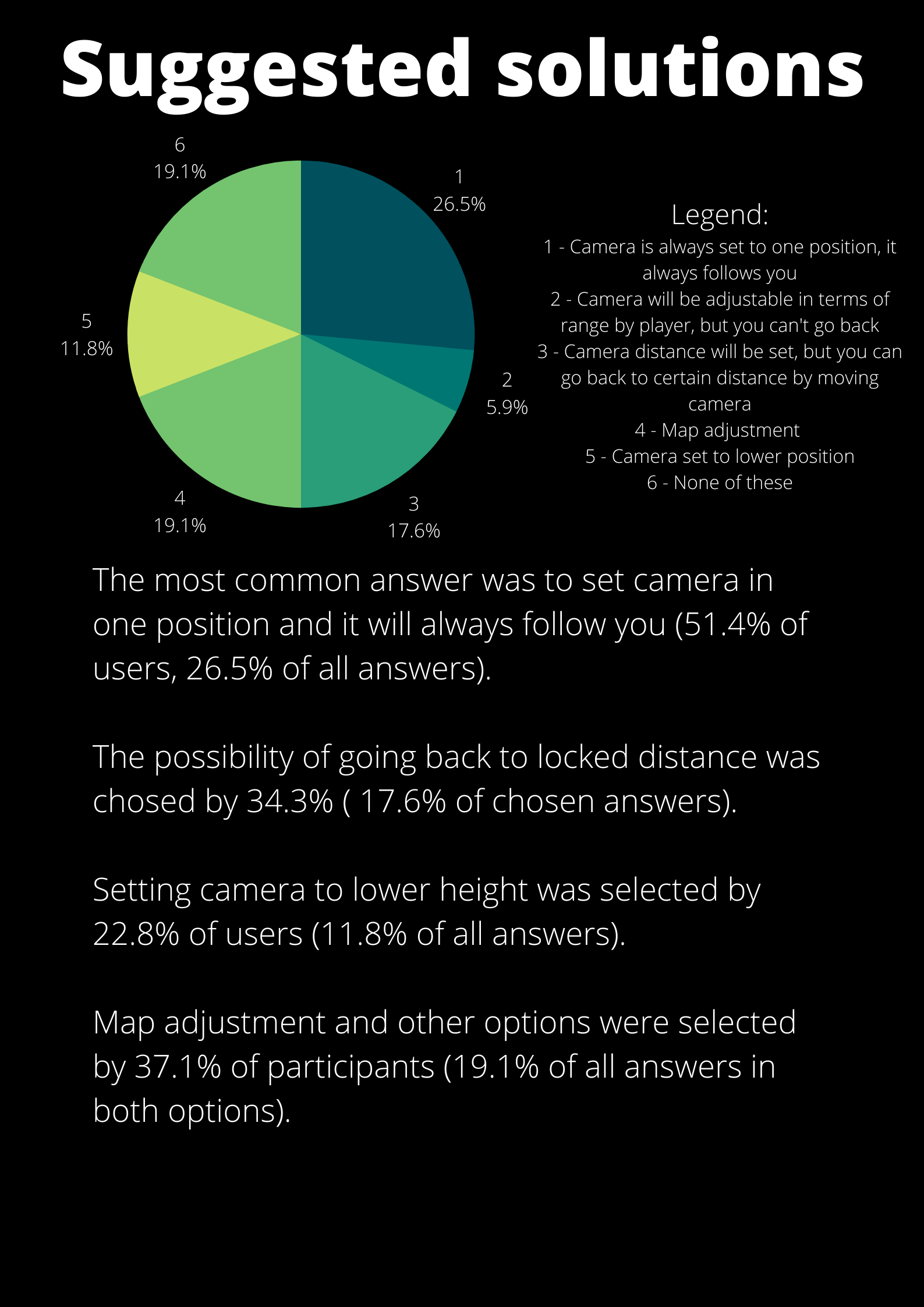 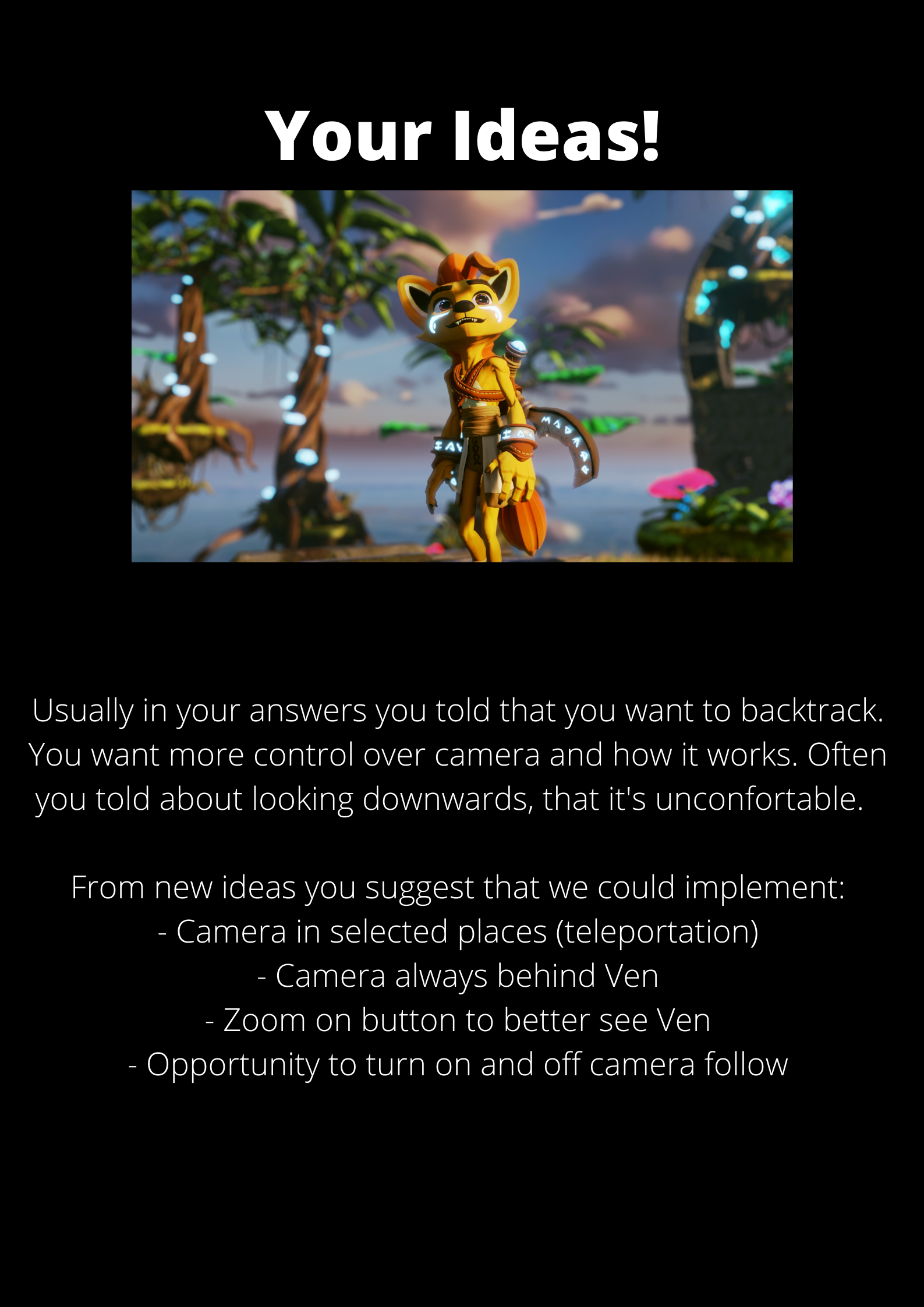 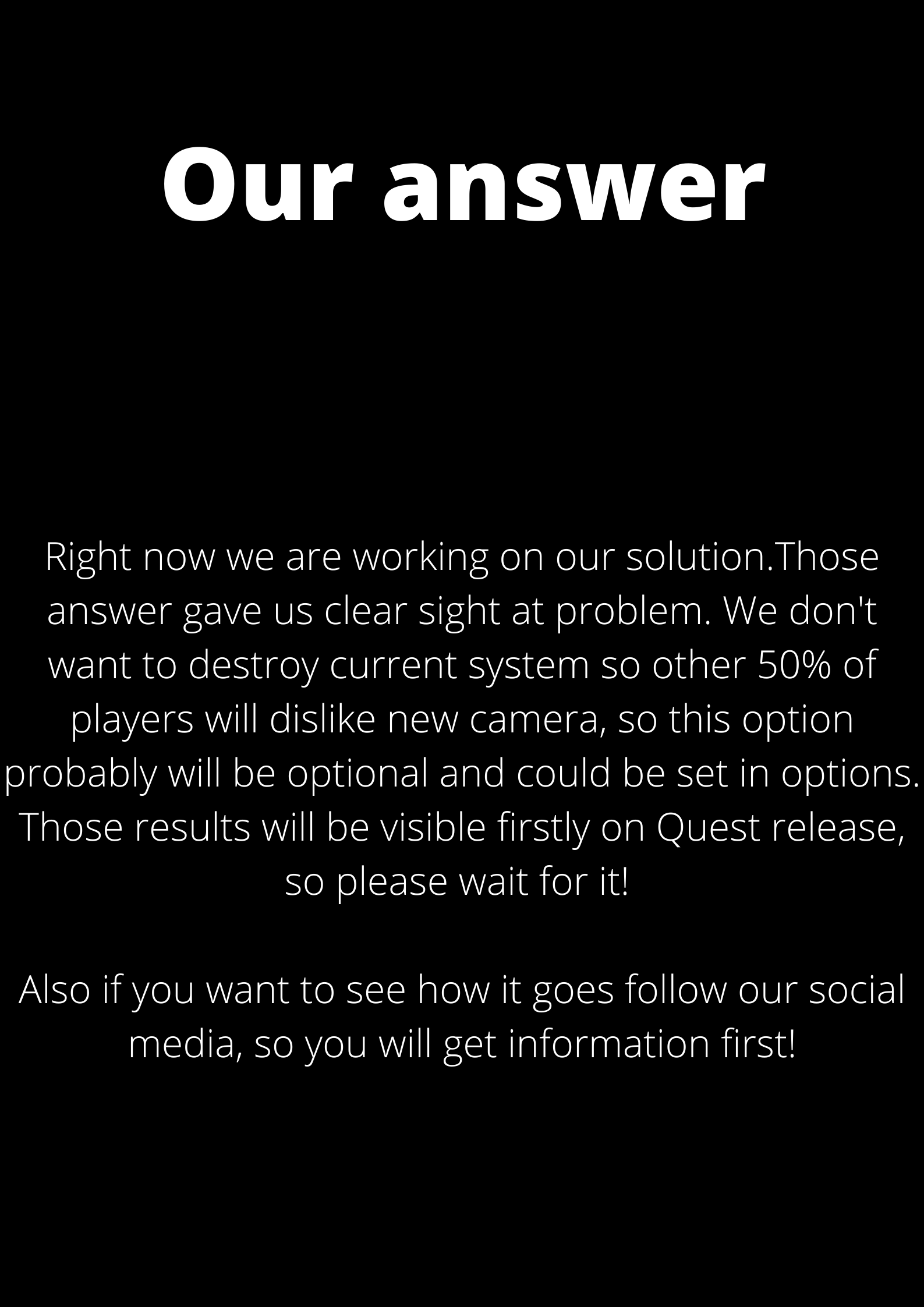 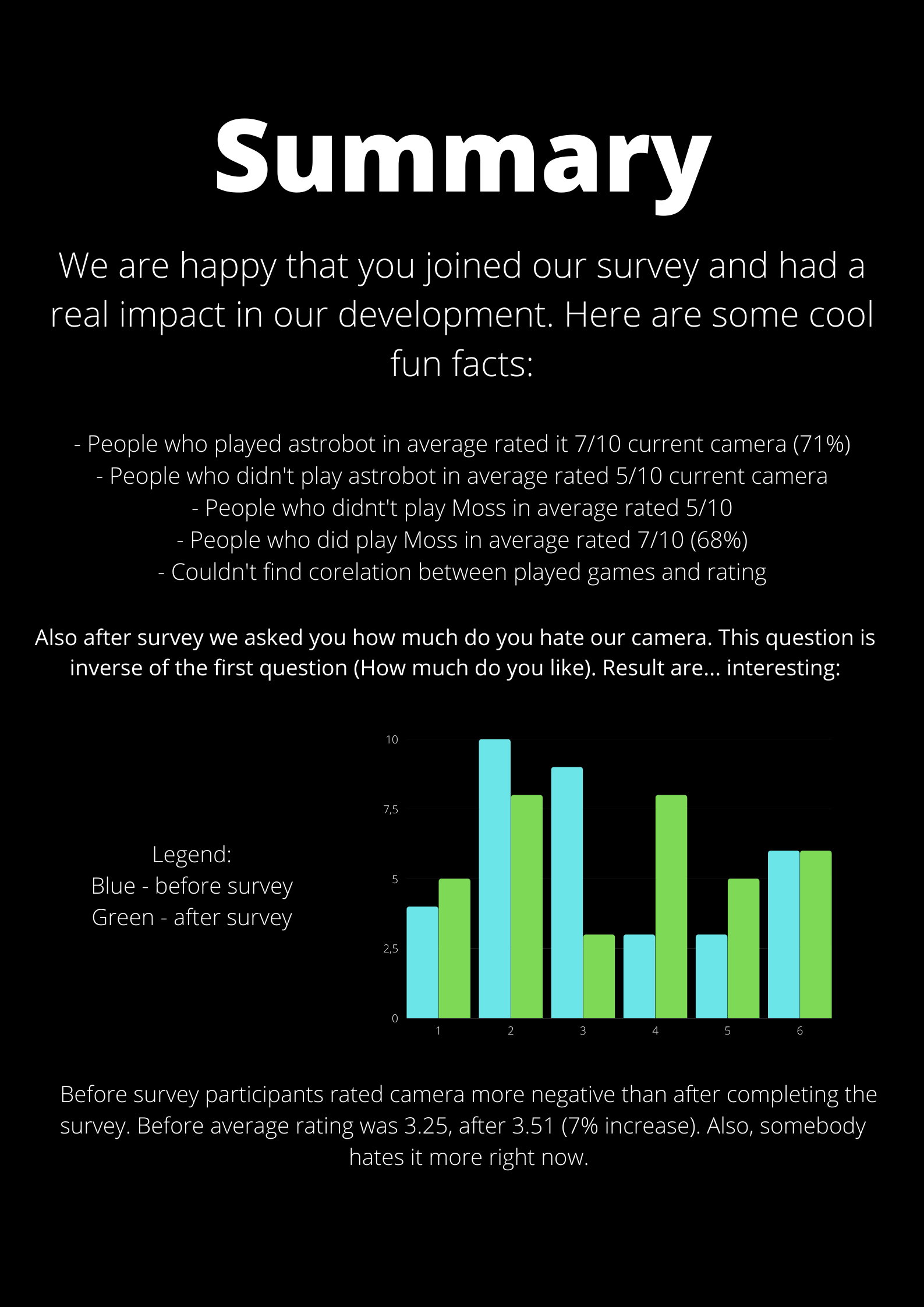 Ven VR Adventure
15
1
Ven VR Adventure - (Not) Monthly Venlog #6
Apr 10, 2021
Hi! We are back with our devlogs after a long break. At that time we have made a lot of progress, released our game on Oculus, Vive, Steam and right now we are working on Quest release!

In this Venlog we want to show you some first impressions we saw and how we adapted to this.

When our first level "Village" was easily completed by many players, there were some users that had problems with poison shrooms: 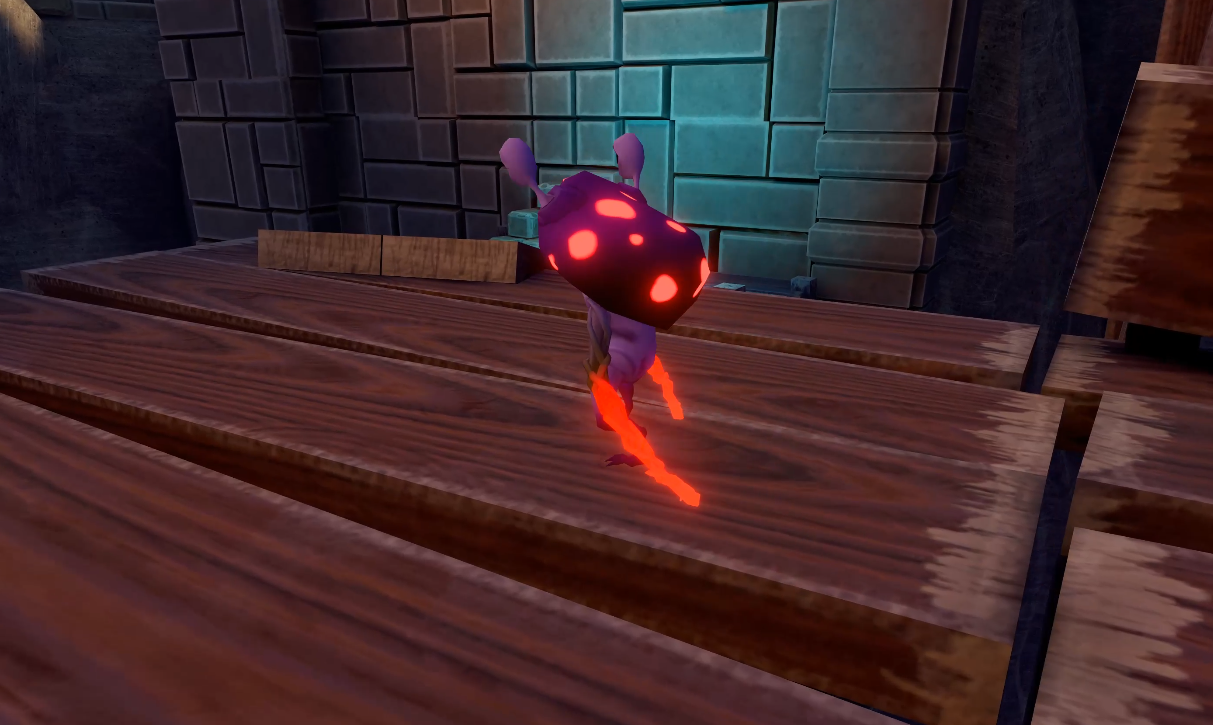 Without this special move player died more times from them than from any other reason. That's why we have implemented additional tooltips at the beginning to remind, that there is such a move in game. After this patch users had less problems with our shrooms. That was one of many changes that normal user wouldn't see, but has a good effect and encourage them to go further.

After release we saw a pattern, that players died at specific places or they just felt discouraged because they passed through not a small part of level and their death was a reason that they were angry not at themselves, but towards a game. It was just not fair for them. While we want to make this platformer a challenging one we didn't want people to throw our game at beginning or because they felt the game was not fair. But there were also platformer fans, who loved this challenge. And here we analyzed places, where people died often. 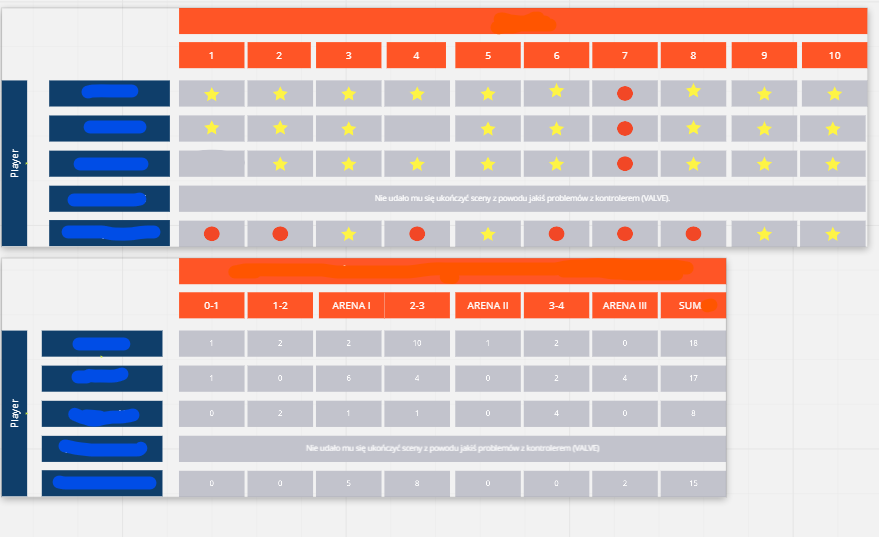 On this image you can see 2 tables, where in one we checked collected Eki and second deaths between checkpoints. It is data from "Soaring Snake",we show you here 5 players with different playstyles through the game (Note: one player failed here, because he had some problems with controllers).

Thanks to those tables we knew where we should focus and also rethink if venkids/checkpoints are in a good place. We have a tendency here that one specific Eki was not collected on the first try.

If we talk about checkpoints, space between 2nd and 3rd checkpoint was crucial. With that data, we decided that this is a great place for checkpoint in easy mode, a mode where we have more checkpoints and we get more lives by collecting crates and runes. In hard mode we made small changes, moved by one challenge etc.

Also, we added note that you won't start from the checkpoint you destroyed and there we will talk about the third point of this Venlog.

Why distance and level length are in same point? Because every change we wanted to make had an impact on the other one. Especially at first level, where players had many far views and didn't see Ven and they played this level ~15 minutes on average. It's too long for first level and when we made some changes we also shortened level. Thanks to that it is more enjoyable for more players, less boring and the players know, where to go, because with wide space we had previously it was more like open world game than true platformer, we wanted to make.

And that's all for today! Big thanks for reading through this Venlog, We hope that we answered some of your questions why we made some changes. There is a lot more to talk about, so follow our social media to be up to date!

Also additional note, sorry you must wait for language patch, but our work extends because of quest release, and additionally we test it there, because we want to give you the best experience we can.

while we are fully working on Oculus Quest, we are also thinking about improving our camera system in the game.
We are fully aware some players didn't like our camera for various reasons, like they can't control it or they can't go back. That was one of the reasons that they gave lower rates or just bounce from our game. Of course we want to improve our game so as many players as possible can have pleasant gameplay.

We have created a survey for you, where we ask you a few questions (5 minutes). We encourage all players who played this game and even didn't have any problems, so we can have precise results and deliver the best solution.

Thanks in advance and have a nice day!

Here are some small fixes introduced after release :)

Our game is available with 10% RELEASE DISCOUNT! 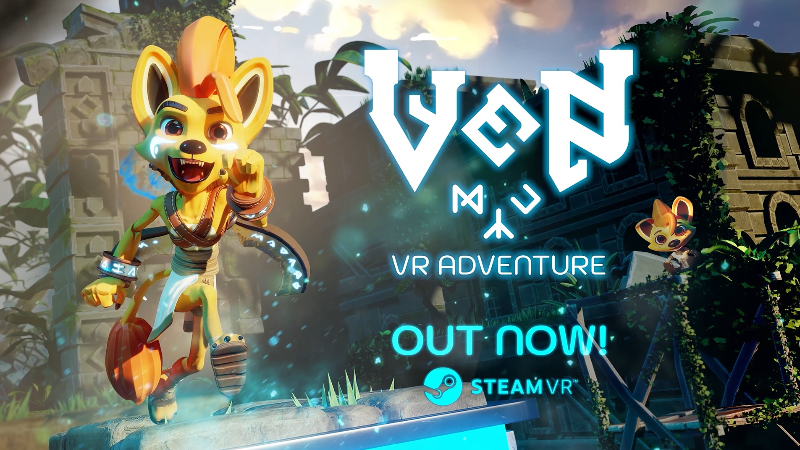 After the Oculus Rift release and SteamVR Beta, we analyzed all of the feedback from the players which helped us improve our game in various fields. The Steam version of Ven VR Adventure is updated with a large number of fixes as well as new functions and gameplay improvements.

Changes were made in every location in the game which means better camera work in VR and more comfortable experience thanks to the Snap Turn option. What is more, we introduced difficulty levels, an indicator for collectibles, new tutorial tips and more!

If you will decide to play our game, don't forget to write the review on Steam! It will be very helpfull for us! 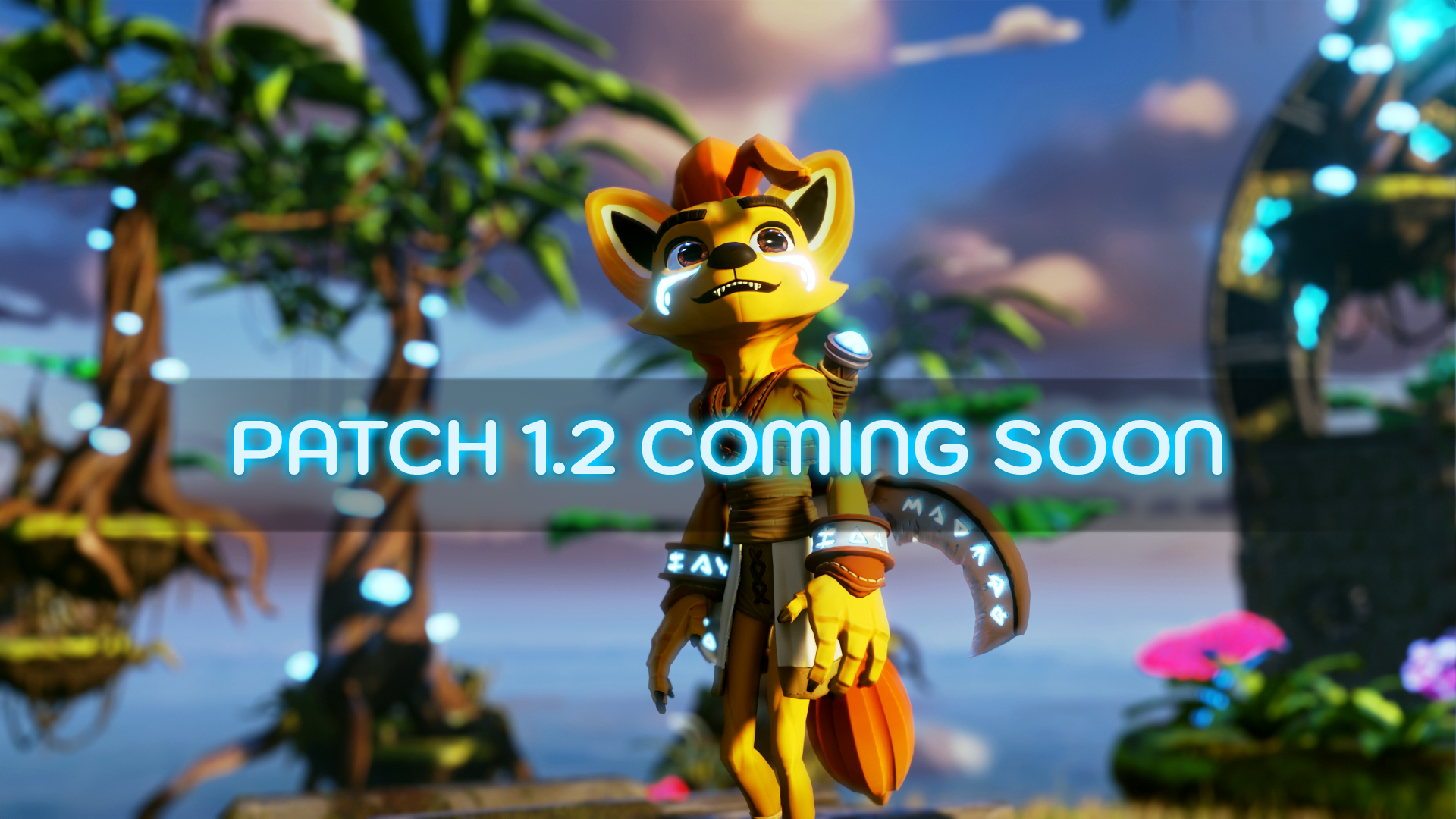 Here is what we’ve been cooking for you the last couple of weeks:


Note: One the same day the update will be also available for Oculus Rift and Viveport users ;)

Ven VR Adventure
20
0
Ven VR Adventure releases on SteamVR on January 28th! Closed Beta is Live!
Jan 21, 2021
Hello SteamVR community! We are happy to share with you that our VR platformer is launching next week on Steam! Save the date: January 28th! Also, the closed beta starts today!

To celebrate the SteamVR release announcement we have a new trailer for you! You can watch it here:

Your feedback means a lot to us because we can constantly improve the game. That is why we would like you to drop by our Discord server or Steam forums and post your feedback if you received access to the BETA.

Ven VR Adventure
18
0
VEN VR ADVENTURE - Join SteamVR BETA NOW!
Jan 7, 2021
Hello Ven VR Adventure Community! As you were recently asking about the Steam version of Ven, we have some good news! Some of you will be able to play it soon! 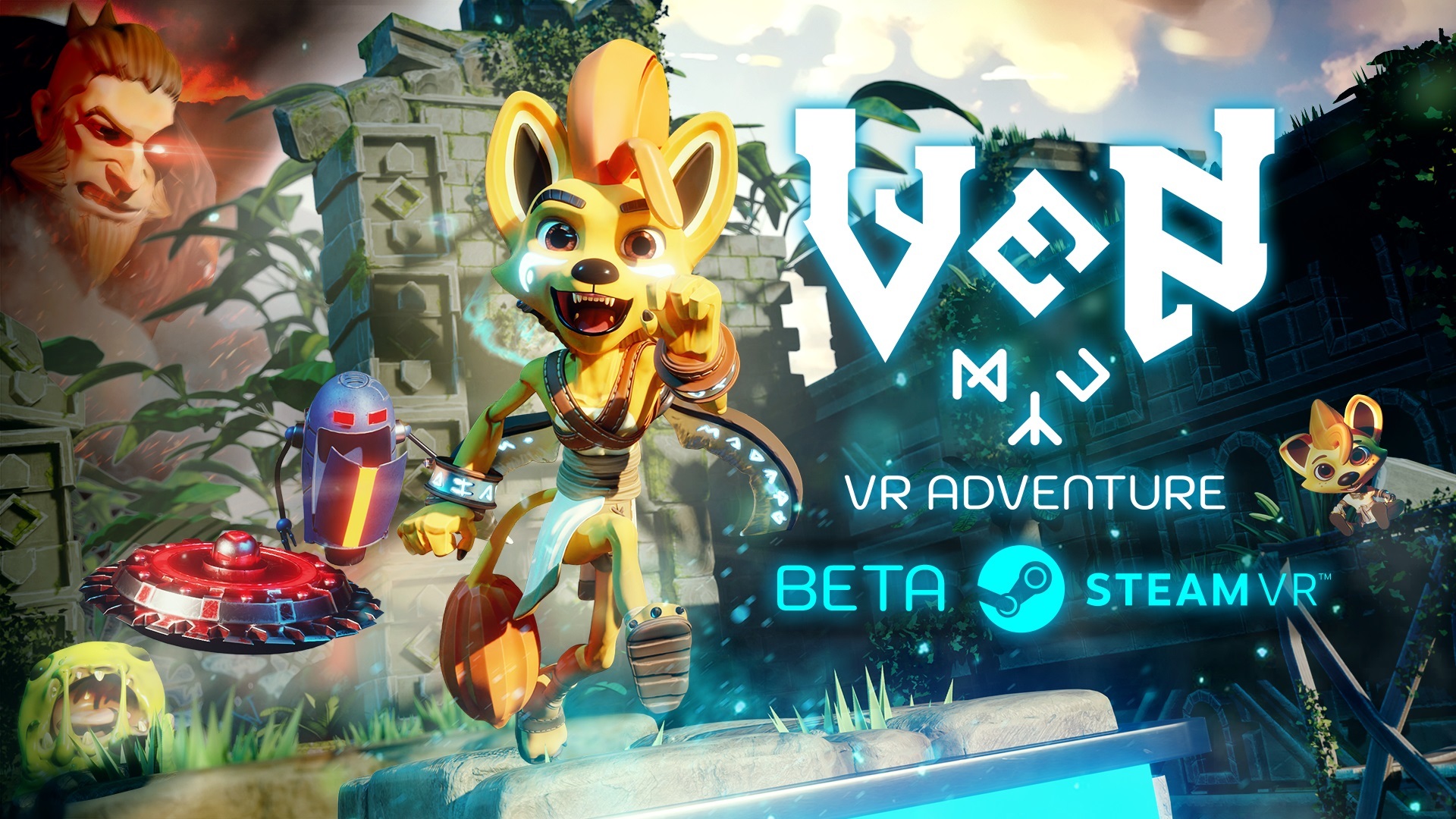 We are happy to announce that we are preparing for the launch of the CLOSED BETA for the SteamVR version of Ven VR Adventure! We want to give you access to the game earlier to be able to improve the experience by listening to your feedback - your opinion about the Steam version of the game will be priceless so don’t hesitate and join the BETA ;)

You can sign up for SteamVR BETA today by visiting the link below! 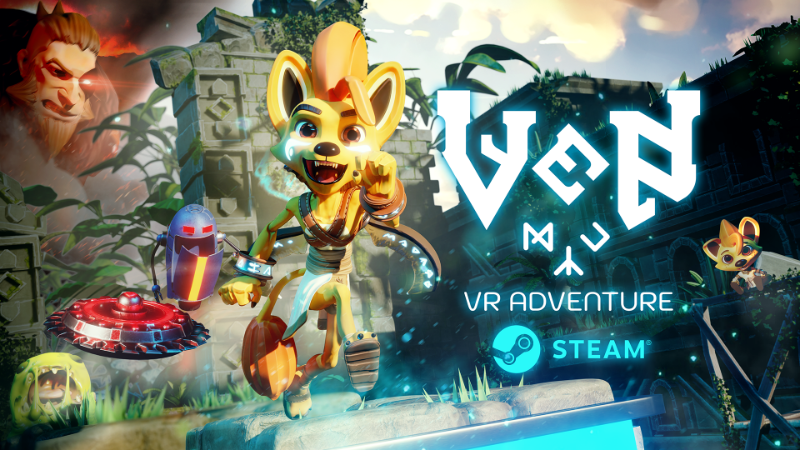 As you might probably know, our game was released on December 17 on Oculus Store. A lot of you were asking about the Steam version and here is the official info.

The Steam version of Ven VR Adventure is almost ready. However, we are a small independent studio and we can work on releasing each version one by one as we mentioned some time ago.

Even if the game is ready in terms of the content, there are various technical differences when submitting the build for each platform. It will take us some more time to have the version ready for Steam release.

Ven VR Adventure will release on Steam in 2021 but you can expect it sooner rather than later - we will be back with the official date soon.