You live and then you die. But at least do it in a nice house! Paralives is an upcoming life simulation game. Build your dream house, create some characters and manage their lives the way you want!
Visit the Store Page
Most popular community and official content for the past week.  (?)
Last Community Brainstorming: Pets
May 10
Community Brainstorming Session
Hey everyone,

This will be the last brainstorming session (at least for a while)! Make sure you don’t miss it! 🧠

With these 16 community brainstorming including this last one, we find that for the time being we have gathered enough information for the design of the most important features of Paralives. It is possible that we host more of these sessions in the future but we can’t guarantee it yet.

The theme is: Pets

Here are some questions that you can ask yourself:
🐩 Dogs, cats and horses are confirmed for the game. What breed would you like to see in the game?
⚾️ What kind of pet furniture and items should there be in Paralives?
❤️ What kind of interactions should a Parafolk be able to have with their or someone else’s pet?
🥫 How complex should a pet’s traits and needs be? What would be different reactions they could have?
😱 How could pets and wild animals impact Parafolks physically and emotionally?
🩺 What kind of pets related jobs would you like to see? 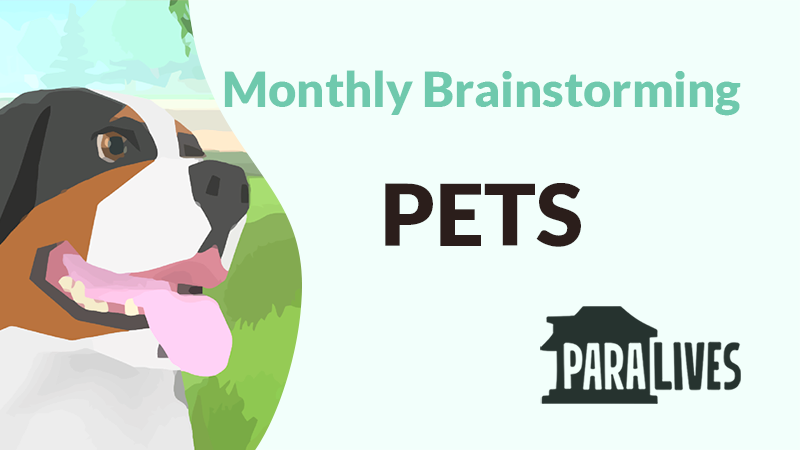 Paralives
266
50
People are too impatient these days
It seems like no one can wait more then 2 years for a game to release. People should not expect games to be finished instantly. There are plenty of things that go on in the development process that developers need to deal with before games are finished like models, graphics, UI, sound/music, code, structuring the game, brainstorming concepts, working with other staff members, the business side of things, and other things....
3

Catzilla01
May 7 @ 7:43am
General Discussions
The Full Paralives Development Roadmap + April Dev Update
May 3
📢 We are very excited to share the full development roadmap up until the release! We hope this gives you a better idea of all the work that goes into the game and what you can expect from Paralives. ✨

On the roadmap, you might notice that there will be an Early Access for the game. We still have some way to go before the release and we are not ready to announce a release date or an estimated price yet but keep an eye out for more news and game development updates! Everyone will be able to play the game in Early Access through Steam, no need to register anywhere.

Aside from this new roadmap, here is last month's recap.

April Dev Update
Here’s what the Paralives team has been working on for the past month.
🎨 Worked on the art style of the environments (furniture, walls, floors, grass, and vegetation)
🎨 Improved some sliders in the Paramaker such as the fat and muscles sliders
🎨 Improved the eye color options
🛠️ Implemented a clothing layering system in the Paramaker
🛠️ Added functionality for clothes to be tucked in or out of bottom clothes
🛠️ Created new live mode animations
🛠️ Worked on the design of the animation system including object interaction
🛠️ Added systems to execute character interactions and animations in sequence
🛠️ Created the interaction queue interface to plan the actions of your characters
🛠️ Worked on randomization for the Paramaker
🛠️ Started testing the pathfinding for the live mode
🛠️ Fixed bugs and improved various features of the Paramaker
🎶 Made demos to explore the musical style of the game
🎶 Improved sounds for the Paramaker
🧠 Fifteenth public community brainstorming on basic and complex needs
✨ Secrets!

Paralives
319
24
Tattoo Feature Improved!
Apr 28
We’ve recently improved the tattoo feature of the Paramaker. In the Paramaker video we showcased last December, we showed you how to place, rotate, and resize tattoos on a Parafolk’s arm.

We brought the feature one step further:

Check it out in action in the video below!

Paralives
204
7
Subtitles! Please add subtitles for Deaf people!
I am 100% deaf in my left ear and I love using subtitles as it makes it easier for me to hear what's being said, especially if I can't quite understand. Let's not forget about the Deaf community! It would be amazing if you guys added sign language into the game, however, I realize that would be difficult....
6

GrayWolffee
May 8 @ 3:20am
General Discussions
Less cartoon. More realism.
The game looks promising, but looks too much like TS4, in terms of characters and houses looking cartoony. TS, TS2 & to some extent, TS3 were all heading towards a more realistic look. Then TS4 came out and the game went backwards. In TS2, the sims had hair that flowed and looked fairly realistic. In TS4, the hair turned into a solid lump of clay. Don't get me started about TS4 eliminating the colour wheel, along with CAS. Taking infinite design choices away from the players ruined the game imo. TS, and ...
80

Hugh Manatee
7 hours ago
General Discussions
First Person
I know its probble unlikely but I thought id suggest it. One thing all Life sims lack is First Person, I always wantted to play a life sims in first person with WASD movement controls and E to interact with stuff or some thing. Would be really neat if devs added such a feature I think it could really seperate this game and make it a very fun experiance I feel every life sims always same thing they all have the top down view and its very old concept so would be fun to see devs add a feature to seperate this...
12

Samantha Raven
Apr 7 @ 12:19pm
General Discussions
Lets Hope Beats Sims 4?
Hoping the game will be better than Sims 4 and fair with DLC if to become the greatest game. There's real potential for the game to have better gameplay? Whens the game possable to release?
54