In Torchlight III, Novastraia is again under threat of invasion and it’s up to you to defend against the Netherim and its allies. Gather your wits and brave the frontier to find fame, glory, and new adventures!
$39.99
Visit the Store Page
Most popular community and official content for the past week.  (?)
Torchlight III Spring Update Now Live!
May 25
A new class has just arrived to Torchlight III with the Spring Update! Anchored in a state between life and death, the Cursed Captain remains true to its adventurous spirit.

As an experienced captain of the seas, this corporeal spectre can summon a ghostly crew of swashbucklers, and use the tools of the piracy trade to tackle combatants. The Cursed Captain utilizes their own unique resource, Doubloons, which are collected mid-combat from monsters and treasures.

“The Captain fully realizes an archetype of class not yet fulfilled - the Summoner. While some of the other classes do have the capacity to summon minions, the Captain is the first to dive deep into that mechanic. Cannoneers, Riflemen, standard Crewmates, and your First Mate all can join you in combat, should you include them in your build. As the captain of this crew, you have the power to command them! You can order the crew to relocate, perform extra skills on demand, or focus fire on a specific target using the Black Spot debuff.

If leading a crew of undead seafarers is not to your liking, the Cursed Captain is also a powerhouse on their own, packing a wide array of cursed magic and explosive skills. Instead of paying Doubloons to your Crew, load them up into your trusty cannon and fire them with the Plunderbuss skill, or order your flagship to fire a deadly broadside onto your foes from afar... or, simply bring the flagship directly into the fight. Yes, I do mean the ENTIRE ship.”

An abundance of adorable pets are making their way to the frontier. From the ‘Samurai Shiba Inu’ to the ferocious ‘Fire Fox’, the frontier’s collection of pets will grow with new, additional quality of life updates in tow.

• FOUR NEW Species with over FOURTY NEW pets and pet variants!
• Improvements to the Pet UI, including the ability to better manage, delete, and sort your pets.
• More pet slots!
• Resolved the bug that prevents pets from joining their owners while adventuring.

There are also an assortment of other content and quality of life updates that will also be coming alongside this ‘Cursed Captain’ update, including an entirely new ‘Fur & Fashion’ contract with all new dyes, fort props, and pets.

An instance reset feature is coming to Torchlight III. Players will now be able to reset any instance from any shared area (towns/forts) in order to restart all of the world’s instances. Now you can continue to farm in a particular area of the world without having to leave the entire game or wear out the instance reset timer.

In addition to the new ‘Instance Reset’ feature, players will be able to entirely reset their Multiplayer or Singleplayer accounts in order to restart their game from scratch as an entirely fresh, new experience.

We’ve also been hard at work to resolve many bugs (including that problematic, lingering Humble Quest log) and performance issues and believe we have made some great strides on both fronts.

The Spring Update is now available on Steam. We hope you enjoy the Cursed Captain as much as we do!

Nokkternal
3 hours ago
General Discussions
Cursed Captain weirdness
Just started a new run with this class and I quickly pickled up an item that gives me "+1 level to all Cursed skills". Equipping this has unlocked every single Cursed skill at level 1 even though I am only level 8. Is this a bug?
5 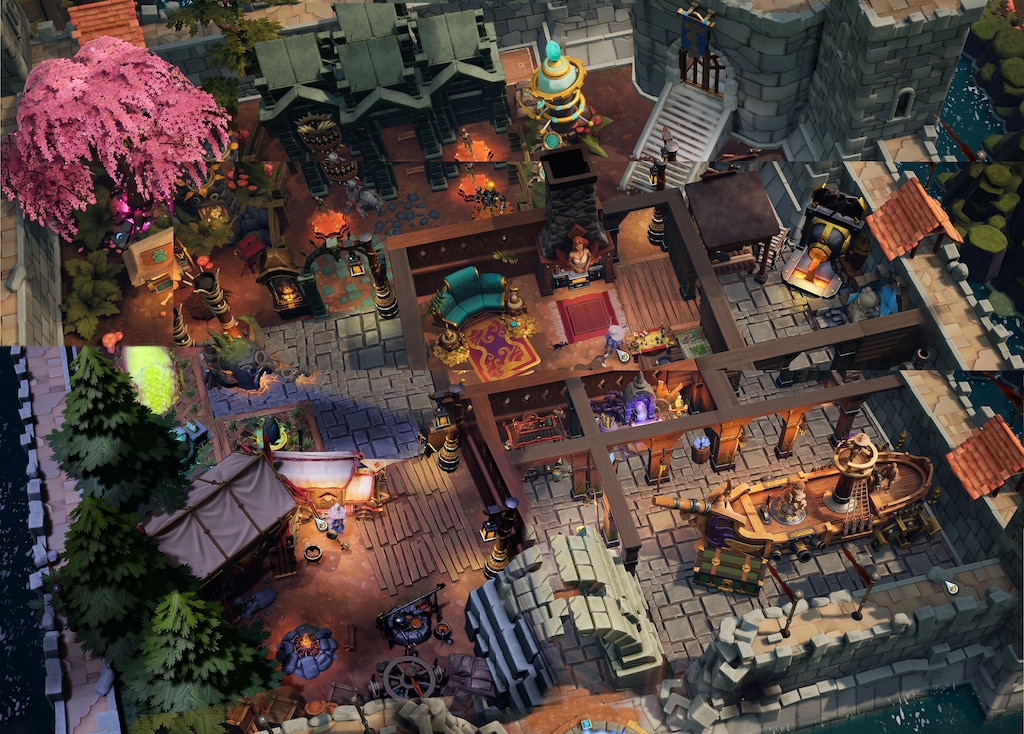 Ant RamPaGe
View all guides
Torchlight 3 is on sale. Buy or no?
Hi Guys, I have just seen Torchlight 3 (TL3) is on Sale and have played Torchlight 2 and finished the game. I also see updates for TL3. Is it worth playing? Read the reviews and it is a mixed bag. YES, I should not expect this like TL2. Also they are releasing updates/patches so looks promising. Thank you

These Hands Rated E for Everyone
View artwork
Guide

No sound for NPCs, quest givers and lore items?
It couldn't be easier or quicker to fix.

Dusk Mage Blood Drinker Holy Fury
Dusk Mage offers some of the highest damage skills in the game with the unfortunate but all too common weakness of not only having to manage mana, but also being a squishy glass cannon. But what if we could remove that fragility?

Not Recommended
13.1 hrs on record
I got this as a gift from a friend, and I feel bad because she paid too much for this game.

Torchlight 3 isn't terrible. However, it's far from good, a far cry from Torchlight 2 and much of the development hell this game went through attributes to a lot of what is wrong with this game.

Torchlight 3 was originally called "Torchlight Frontiers" when it was still being made by Runic Games, and it was originally supposed to be "open world" (which is still an annoying buzz-phrase in the gaming industry), and obvious how trace elements of the original iteration of the game still exist in the current product as an ugly wart. Early on the game, your character is given a fort with no reason or rhyme as to why you need it, as the game and story progression are linear. You pick up a quest from an NPC with little-to-no explanation as to why you are doing it in the first place, go to a location, kill a monster, teleport back to the NPC, who will then give you another quest to go to a boring, copy-and-paste dungeon to kill another monster boss. There's some audio recordings and cutscenes but they do very little to alleviate the tedium you will feel. Torchlight 3, which was thrown into "early access" at a totally fair and reasonable price of $40, still suffers from some of the same bugs and glitches that were never fixed, and still misses certain features that players have requested, such as BEING ABLE TO PAUSE THE GAME ON SINGLEPLAYER. Such problems are:

- Your pet will sometimes disappear from the map with no explanation. Sometimes this happens when you send them back to town, other times they just vanish from existence and don't come back unless you leave the map and come back or relaunch the game.

- Every time you return to a zone you were in (which will happen a lot, because the game will gridlock you into certain areas until you complete a 'quest') will reset. The map will be blank, the bosses will reset, and you will feel deja vu as you go through the entire place *again*.

- Every now and then you will get a "contract" item that will open up a portal and send you to a previous zone where you have to collect certain items and kill a boss. Don't bother doing these, as they bug out the majority of the time and the boss doesn't spawn. You can 100% the rest of the map and they still won't show up.

Which brings us back to the Fort problem. Echtra completely gutted the renown system, for one, and instead of getting extra skill points every time you increase in renown you are "rewarded" with cosmetic garbage to decorate your fort. Not only can you teleport to the stupid thing, but insists on teleporting itself to you in between going to new zones for no reason. Your character can harvest ores and lumber in the world, which can be used to create planks and ingots to create MORE decorations. However, you have to actually wait until your mill and smelter create these items, which gives it the vibe of a cheap mobile game (or Warlords of Draenor) that actually just plays itself. You can see how they were going to use these awful mechanics to incorporate an in-game store for crappy fort cosmetics, but the entire plan fell flat on its face when Runic Games went the way of the dodo and Echtra took the reins. This all came at the cost of the actual game world, which feels dull, void and barren.

I would recommend this game as an entry level action RPG to a 10 year old, or to a parent who doesn't really play video games and wants to spend time with their child. I would not recommend it to anyone else; if you want a good Torchlight game, play the predecessor. 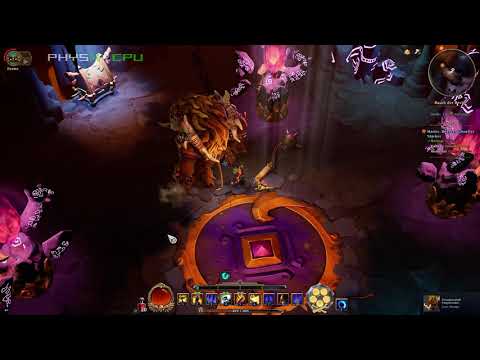 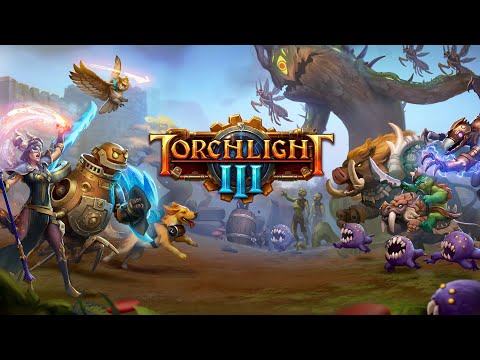 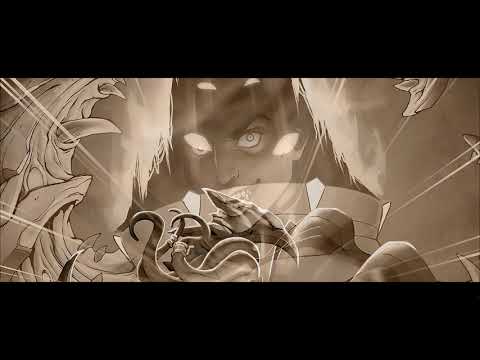 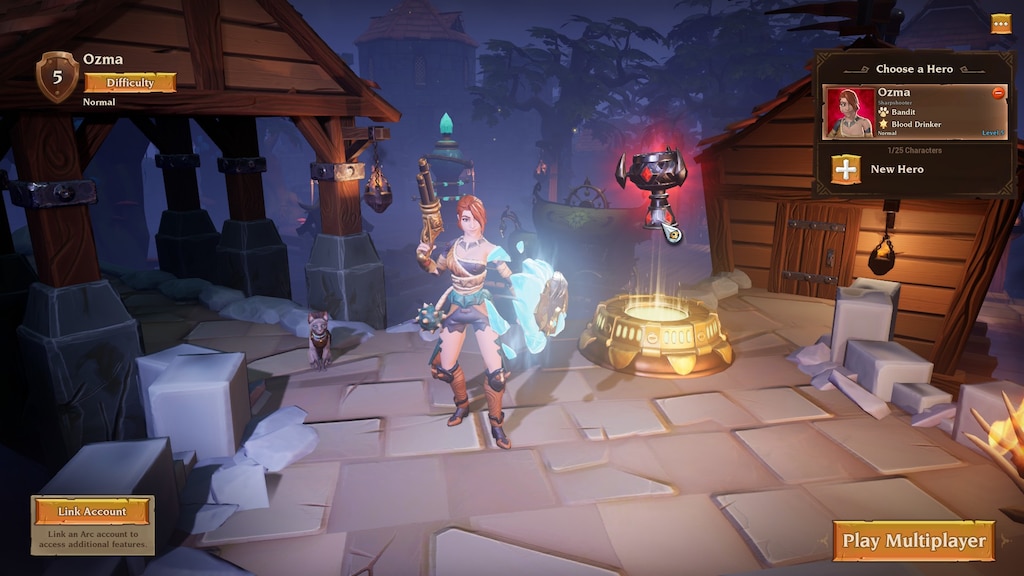 Not Recommended
77.5 hrs on record
Cool have been great ,poor skill system. 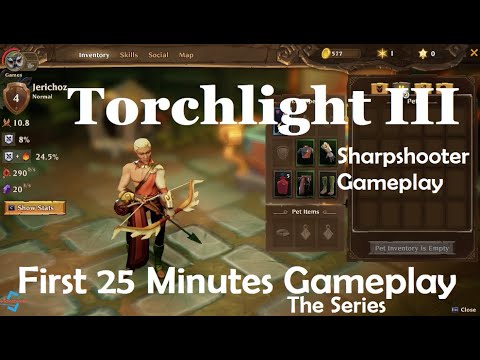 Recommended
15.2 hrs on record
Been playing this with my husband and we're having a blast! Love the art style and as for the classes the forged is my favourite, it's so goofy lol. This will hold us over until D4 ;D 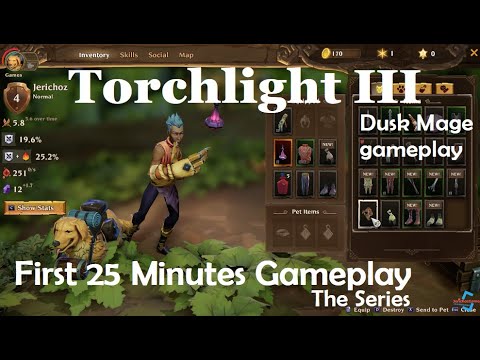 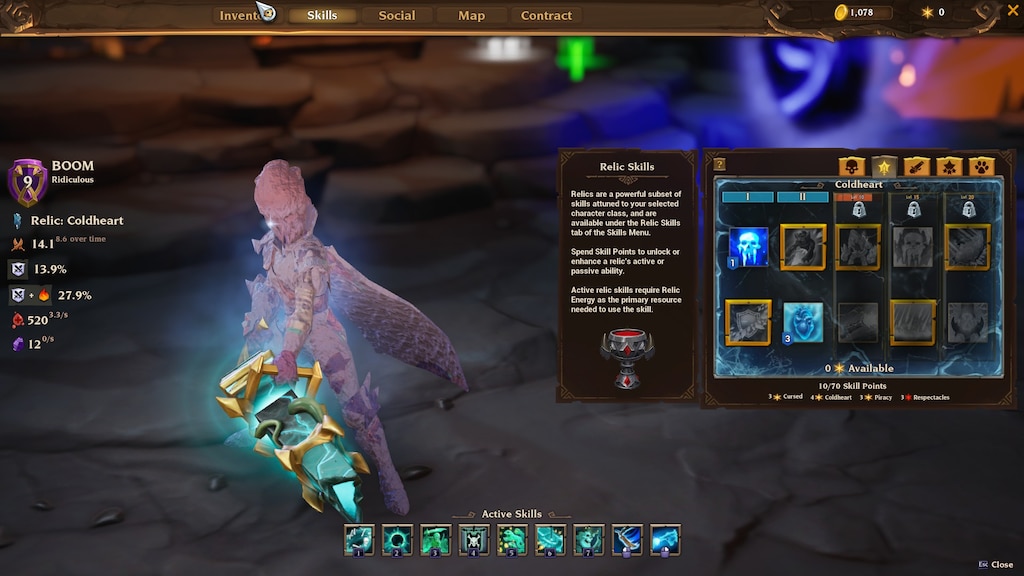 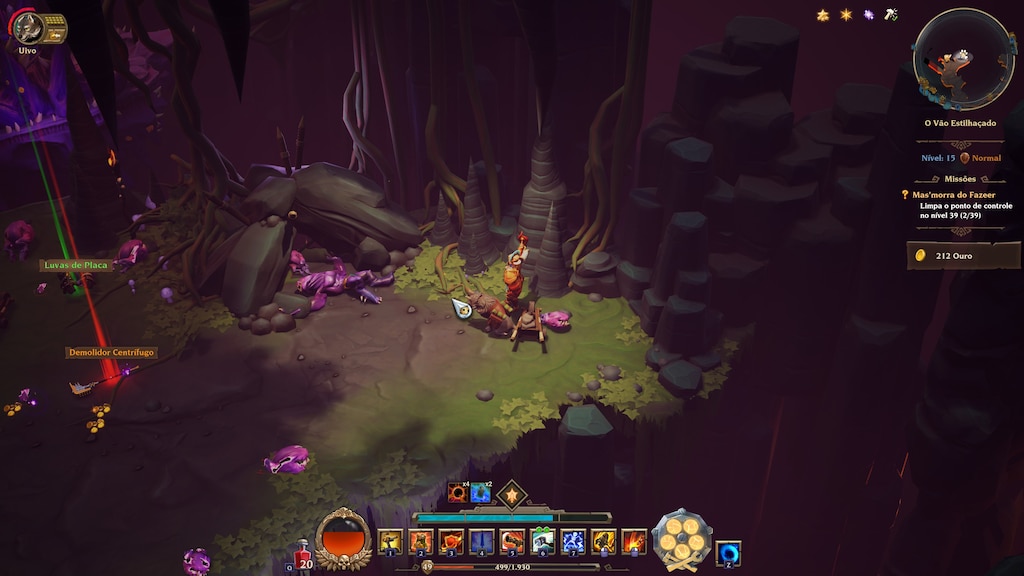 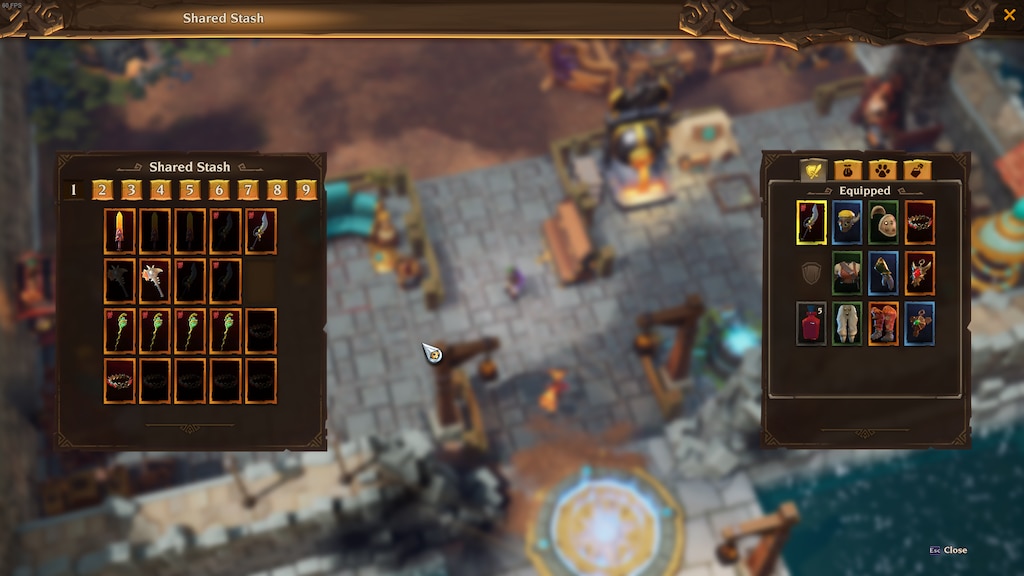 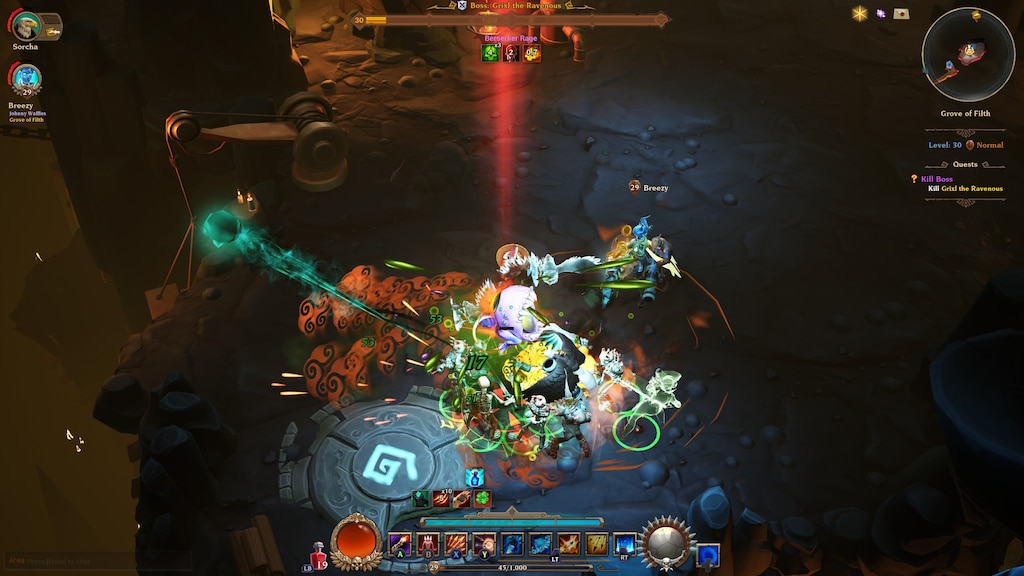