Store Page
Hatred >  Workshop > Igoreso's Workshop > Mass Murderer - a FPS mod (outdated) > Discussions
This item has been removed from the community because it violates Steam Community & Content Guidelines. It is only visible to you. If you believe your item has been removed by mistake, please contact Steam Support.
This item is incompatible with Hatred. Please see the instructions page for reasons why this item might not work within Hatred.
Current visibility: Hidden
This item will only be visible to you, admins, and anyone marked as a creator.
Current visibility: Friends-only
This item will only be visible in searches to you, your friends, and admins.
Mass Murderer - a FPS mod (outdated)
Description Discussions2 Comments756 Change Notes 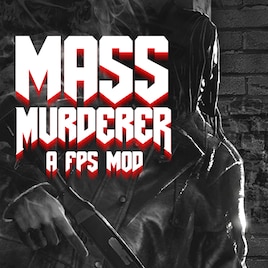 Want to join the discussion? You need to sign in or create an account.
Date Posted: Jun 23, 2016 @ 10:42am
Posts: 0
Start a New Discussion
Discussions Rules and Guidelines
More discussions

Wording can be wrong, but all of the following is applicable to both FPS and TPS mods unless explicitly specified otherwise.


***** KNOWN ISSUES *****
Configured mouse sensitivity is not taken into account when aiming vehicles' turret
Sorry, it bothers me too, but unfortunately it cannot be fixed.

[] - Hands are "cut-off" and "hanging in the air"
Short answer:
I don't like it myself but it went through a lot of iterations (it really did) and current result is the best I could do under given circumstances. It cannot be "improved" or "fixed" due to a whole bunch of reasons that I have no control over. So, it will stay this way.

Long answer with boring technical details:
Game's camera was not supposed to be used for FPS view, so its configuration has one disadvantage for FPS - its near plane[en.wikipedia.org] is placed too far from it. This leads to the issue when model that is close to the camera is being "cut" in the middle, exposing its internals. When I initially configured camera in my mod, all weapons were "cut" in the middle - it looked something like this[i.imgur.com], but way, way worse. To avoid it, I had to move camera back, but this leads to another issue - you start seeing backs of the upper arms. To solve this I had to hide everything that sticks out, meaning upper parts of both arms. Hence the current result.

[] - When dodging, view snaps
This is too troublesome to fix. You have to deal with it, sorry.

Game became more difficult and challenging
Well, for starters, even base game is hard - difficulty levels were called that way by DC for a reason. It's harder to play with FPS or TPS perspective because you don't see anyone 360*, plus enemies shoot at you from further distance (read below).
I strongly recommend playing on lower difficulty level than you usually do, e.g. play on Easy instead of Hard, etc. I myself was only able to finish it on Easy.
Max health was bumped a bit per difficulty level to compensate for added difficulty:
No further changes will be made to make it harder or easier. Don't waste time asking.

Less frames-per-second than in base game; more demanding to GPU
I didn't change graphics. The game was not initially supposed to be viewed from FPS / TPS perspective, so in many cases your GPU has to render a lot more than it rendered in top-down perspective.
I can't really do anything on this matter. Only professional game devs can work with such issues, and I'm not one of them.
Recommendations:
Trust me on this. Even my GeForce GTX 1060 struggles with drawing shadows on Low setting.

Enemies only shoot straight; don’t ever look up or down - obvious on stairs
Base game issue, I can’t fix, therefore it won't be fixed.

Bullets don't hit their targets further than certain distance
Base game issue. Originally, enemies started shooting at you near the edges of screen, plus you also couldn't shoot further than that. It looked really weird in FPS / TPS perspective because it felt like bullets are not hitting enemies, so those distances (enemies' and player's) had to be increased. But I also had to keep the balance and make it fair, so both distances had to be increased by same value. If that value is too big - enemies would shoot at you from too far away, which is annoying and makes it difficult to play. I decided to stop at 150% mark, where it both doesn't feel too weird and is not too hard to play.

Mods don't support hardware cursors
Cannot be fixed, you have to use standard crosshairs. Game draws them based on screen coordinates I provide, whereas "hardware" cursors are your system's cursors, and they don't obey the game. More info:

However, software cursor renders in the FPS you have. So if you drop to 20, you have your cursor refreshed 20times per sec. You're gonna notice it, will feel laggy and non-responsive. Imagine that software cursor is just a texture moving with your mouse, but all the rest stays the same, it's going through the regular engine loop.

Hardware cursors skips all that. You use the system to draw the cursor. You can use custom image, but it's not gonna be a pretty *.tga or *.png, it has to be an image the system wants. Windows wants *.ico. Now, the system ignores the fact that the game exists for vast part, it only draws it's own cursor on top of it. It uses a special type of mechanism to do so each time the mouse moves, regardless of the fps. Game engine no longer handles the cursor, the OS does.

I suppose it could be done to work with the mod (since you can just keep asking each game loop where the cursor is), but then you'd have a de-synchronization between where the cursor is right now, and when it was the last time the game asked. It's not gonna work well in low fps. With software it will be a bit laggy in those conditions, but at least if you aim somewhere, then you will shoot there, because you see exactly what the game knows right now.

Stuck in the ground when exiting vehicle flipped on its side
Happens in base game too. Won't fix.

Achievements are not working
This is the limitation of the game. Otherwise the first mod on workshop would be the one that unlocked all achievements, which wouldn't be fair. This can't be fixed.

Cheats work, but cannot be unlocked by completing the mod
This is the limitation of the game. This can't be fixed. Unlock cheats by beating unmodded campaign on Extreme difficulty level.

"Game crashes / something weird happens!"
There is nothing in either of mods that could cause a crash or any kind of malfunction. If it crashed or misbehaved in a mod - than it could crash or misbehave in base game as well. Update your system, update your drivers, and if nothing helps - count yourself unlucky and get over it - there is nothing I can do to help you because I'm not a DC developer.

"I installed the mod and my screen flickers // turns black / green / red or whatever while playing"
See answer above.
P.S.: Recent Nvidia driver updates broke something in the game. If your screen flickers green - try using "fullscreen windowed" mode.

"How do I look at my weapons and ammo?"
Hold your Show Objectives key. This is covered in Tutorial level.

"Where is minimap? How to show it?"
Hold your Show Objectives key. This is covered in Tutorial level.

"Can I force minimap to always be visible?"
No, you can't. Hold your Show Objectives key to see it.

Vanilla game had minimap always on because due to perspective, you needed some way of knowing if enemies are approaching. There was little point in looking at it when enemies were already on the screen. It went nicely with the genre of top-down shooter. But since both mods change the perspective, minimap becomes a cheating tool - you can always know where enemies are even if you don't see them (e.g. you could tell that someone is behind the wall), which I find contradictory to the whole point of FPS and TPS genres.
Sorry if it bothers you, but it will stay this way.

"Are controllers supported?"
Yes and no.
I attempted to add a support for them and it worked when I tested it for initial release, but few people claimed it doesn't work since then, so it probably doesn't.

"How do I adjust controller's sensitivity?"
You can tweak it using game's options. Not mod's options.

"How do I adjust mouse sensitivity?"
Press F1 or F2 in-game and you'll see help message with all info you need. This is covered in Tutorial level. Mouse sensitivity doesn't impact controller's sensitivity.

"How do I adjust FOV?"
Press F1 or F2 in-game and you'll see help message with all info you need. This is covered in Tutorial level.

"How do I invert Y-axis?"
Press F1 or F2 in-game and you'll see help message with all info you need. This is covered in Tutorial level. This setting also impacts controllers.

"Why antagonist's post-execution one-liners were removed?"
That's my vision of the game. It won't change. Reasons why I did this:

"Do you plan to do X? / Can you do X?"
No. Both mods are finished and I'm not doing any more changes.

"Can I play it with Color Mod / any other mod from workshop?"
Well, there is no simple and legit way of playing it, because my mods are Map Pack, and Color Mod is - and, in fact, almost all other mods on workshop are - a Total Conversion, and game doesn't allow playing map packs when TC is active. Programming is not easy, so DC couldn't implement it with human- and time resources they had.

However, there is a guide out there on how to make it work - it requires messing with game's files. BE WARNED: I'm in no way associated with that guide and I hold no responsibility for what's written there, and I certainly can't be responsible if you break your game while following that guide. Do it at your own risk. See it here.

"Can you share your mod on site X? Or share files directly?"
No. I'm not sharing my mods on 3rd party sites. Neither do I provide anyone my mods' files. Not now, not ever. Use steam workshop to subscribe to it.
Any site sharing my mods is doing so without my approval. I have no affiliation with such sites and I cannot be responsible for the content they share. If you decide to use those sites - you do it on your own risk.

Also, this topic is prohibited by steam rules, so you expose yourself to a risk of getting permanently banned from steam community by steam moderators. I won't report your post, but I don't want any troubles either, so I reserve a right to delete such posts without any notice. I may or I may not practice it, depending on my mood and/or on how insistent you are. Anyway - you've been warned.