Greenlight > Games > FunSmith's Workshop > Crashtastic > Discussions
Greenlight is being retired. For more information on how to submit games to steam, refer to this blog post.
This item has been removed from the community because it violates Steam Community & Content Guidelines. It is only visible to you. If you believe your item has been removed by mistake, please contact Steam Support.
This item is incompatible with Greenlight. Please see the instructions page for reasons why this item might not work within Greenlight.
Current visibility: Hidden
This item will only be visible to you, admins, and anyone marked as a creator.
Current visibility: Friends-only
This item will only be visible in searches to you, your friends, and admins.
Crashtastic
Description Discussions74 Announcements6 Comments1495 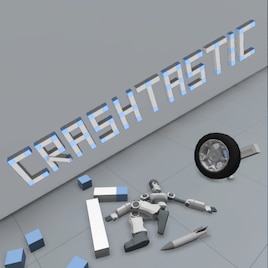 4
An update would be nice

1
The Damn MUSIC WONT TURN OFF

Adele
View Profile View Posts
Aug 13, 2014 @ 5:20pm
glitch #32
One day I (randomdeath5) decided: hey! I kinda want to play Crashtastic! So that’s what I did. I opened Crashtastic, and opened the sandbox mode. I skipped making the level, because all I wanted to do was make a fast car, and I needed to test it on a completely flat space. I made a couple attempts at making a car that would go 1000 mph, I did it. Then, I said: lighter is faster… right? Well, I tried that. I opened a new car. I put one rocket going up thinking: im sick of making cars over and over, so ill make a flying thingy. I put a rocket going up, and a rocket going sideways. I clicked go. Little did I know, this would start the hours counting down to my end on this earth. (Got really dark really quick, huh?) Any way, the rocket chair went up. Really high, He ended up going like 12000 mph. I couldn’t see him (the guy in the chair. lets just call him bob.) This was weird, because the camera usually follows him. I zoomed in, and all of his joints, including his feet and hands, were made out of stretched out, sharp, glitchey polygons. Then I turned the cam to his face, it was glitched polygons. But it looked pretty freaky. It looked like that sexy jacksepticeye dude, but his face was all bloody. And he was smiling. I called this glitch # 32. I tried to close the game, but the window turned red and black. I turned off my pc with the power button, even though it’s pretty bad for it. When I went to bed, I couldn’t sleep at all. When I finally did, it was 3 am and the lights were still on. When I woke up, the sky was over cast. Which is weird for a summer is Washington. I went and got some breakfast cereal. No one was awake, it was 12 pm. I thought that was even weirder than the sky, because their noise usually wakes me up. I ate my cereal, and went and checked on them. They were all dead. Blood every where. Their guts all over the walls, so I grabbed my pocket knife, my Dads car keys, and ran outside. Started his sports car, and drove as fast as I could go. Till I ran out of gas, I looked in the mirror to see if anyone was coming. He was there. Bob. With that messed up face. Ha took my knife. And he ended me. As I am writing this from heaven, I am looking down on the beast. Mauling all of his victims, One by one, He stopped for awhile, because nobody played the game and found the glitch anymore. But on occasion, It happens. And he kills them. Slowly but surely, He will.
< >
Showing 1-9 of 9 comments

Adele
View Profile View Posts
Aug 13, 2014 @ 5:22pm
this is my first creepy pasta. plz dont be mean, i already know its not the best. you dont have to tell me agian. hope you liked it tho
#1

Adele
View Profile View Posts
Sep 8, 2014 @ 12:42am
thanks for at least reading this, and taking time to comment on it, you are only the first (and problebly last) persong do do anything like this anywhere. thanks, it means alot.
#3