Store Page
Cities: Skylines >  Workshop > Kramer's Workshop
This item has been removed from the community because it violates Steam Community & Content Guidelines. It is only visible to you. If you believe your item has been removed by mistake, please contact Steam Support.
This item is incompatible with Cities: Skylines. Please see the instructions page for reasons why this item might not work within Cities: Skylines.
Current visibility: Hidden
This item will only be visible to you, admins, and anyone marked as a creator.
Current visibility: Friends-only
This item will only be visible in searches to you, your friends, and admins. 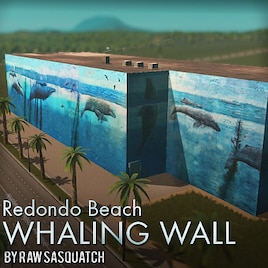 Kramer
Online
See all 22 collections (some may be hidden)

This item has been added to your Subscriptions. Some games will require you to relaunch them before the item will be downloaded.
Description
Whaling Wall - Redondo Beach
Redondo Beach, California, USA

This asset adds the Redondo Beach Whaling Wall to the game as a Unique Building.

The Redondo Beach Whaling Wall is a massive mural (itself titled "Whaling Wall No. 31" or "Gray Whale Migration") 95 feet tall and 622 feet long, painted by the artist Wyland on 4 faces of a disused structure once part of the AES Redondo Generating Station, a power plant. The largest feature of the Redondo Beach waterfront, the mural depicts local ocean life, primarily gray whales, a blue whale and calf, and a small pod of dolphins. Wyland's "Whaling Wall" series of murals numbers over 100 pieces world-wide, with the stated goals of involving local communities and inspiring children to get involved in marine conservation awareness. The structure has fallen into disrepair over the years, and the fate of the mural is uncertain as the entire AES Power Plant site, long slated for demolition and redevelopment, is the subject of a decade-long legal and public relations battle between city leadership, real estate moguls, and the mural artist himself.

This is not only my first-ever Cities: Skylines asset, but my very first 3D Model + texturing ever! So it may be a little unimpressive, especially around the back side of the building, and it also is bigger than the plot it sits on (sits on a 16x5 Plot, but is actually more like 18.5x6), likely requiring some extra flattening to fit into your build. If you intend to work this asset into your city, my recommendation would be to use it to sort of block out an "eyesore" area from your coastal developments; like an Industrial zone, cargo/warehouse area, or even city utilities like power/water/maintenance. It's definitely a big and super niche structure that you won't use in every single city, but I hope it can find a home in at least one of your builds!

Buy me a coffee!
If you like my mods and want to see me make more, please consider donating!

Rhine Nov 23 @ 4:59pm
This looks exactly like the one in Cleveland, OH! Looks amazing