Store Page
Majesty Gold HD >  Workshop > Enerril's Workshop
This item has been removed from the community because it violates Steam Community & Content Guidelines. It is only visible to you. If you believe your item has been removed by mistake, please contact Steam Support.
This item is incompatible with Majesty Gold HD. Please see the instructions page for reasons why this item might not work within Majesty Gold HD.
Current visibility: Hidden
This item will only be visible to you, admins, and anyone marked as a creator.
Current visibility: Friends-only
This item will only be visible in searches to you, your friends, and admins. 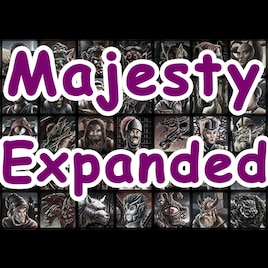 VikesRule
Offline
See all 3 collections (some may be hidden)

You can play this mod with Northern expansion quests and most Workshop quests. If you want to play original quests you must activate them from the downloaded quests section which is located in the top left corner of the world map.

NEXT UPDATE: time to add some quests
Popular Discussions View All (6)

precious pearl Nov 1 @ 8:56am
thanks buddy. portals seem to be working? it's a really nice touch.

Enerril  [author] Nov 1 @ 12:34am
There's no clear list of what's been changed in the new game+ mod. So I can't tell 100% whether mods are compatible or not. Most likely not. However, if you activate New game+ mod and AFTER THAT activate ME, then perhaps some features from new game+ become available without breaking the game.

About earthquake... It really can get annoying with AIs chain-casting it and perma-shaking screen. But it is rare. AI have longer cd of using it than the spell cd, proc based. The offensive of that spell is irreplaceable.. I'll tweak something about that

precious pearl Oct 31 @ 8:37pm
could you prevent the AI from casting the sorcerer spell 'Earthquake'? it's really annoying

precious pearl Oct 31 @ 6:52pm
what does "Portal" building do? i am assuming it provides easy access from place to place, but do the heroes know that it does?

Enerril  [author] Oct 16 @ 12:42am
Nope. Both mods are overhauls and are not compatible with each other

Enerril  [author] Oct 9 @ 2:48am
It comes with this mod. After you choose mods, go on to the game map with quests. In the top left corner there's icon for downloaded quests. There are custom Majesty quests. There you will find Big Map