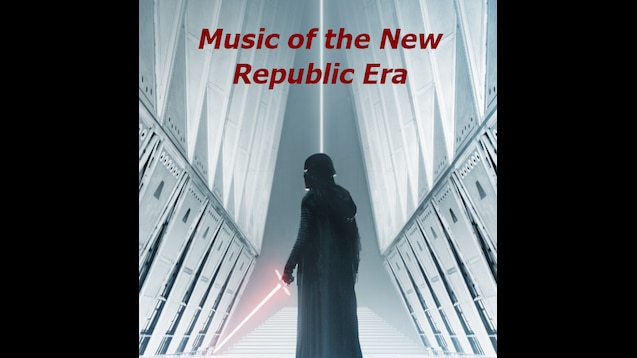 These tracks were originally selected for the now defunct total conversion "Dawn of the New Republic" and were originally going to be included with the mod on release. Since the mod is dead, I have decided to go ahead and release these tracks for people who want to include some post-Endor music for their New Dawn (or vanilla) playthroughs.

This mod will be updated periodically as new tracks from canon material becomes available.

However, this mod does not include any tracks from any of the prequel or original trilogies and instead focuses on material set after Return of the Jedi. Since games like Jedi Knight II: Jedi Outcast and Jedi Academy rely heavily on John Williams' score for the original trilogy, nothing from those games will be in this mod.

If you want to have music from the original and prequel trilogies (as welll as the complete tracklists for Episodes 7 and 8), please check out cmo3056's "Better Star Wars Music."

This collection of music will not conflict with any mods. At worst you will have duplicates show up on the music player if you are using another mod with the same/similar tracks.

Special thanks to SolarRider for allowing me to use some tracks from his "More Star Wars Music" mod. However, the biggest credits must be given to John Williams, Ludwig Goransson, Joseph Shirley, and Gordy Haab for their work on the Sequel trilogy, the Mandalorian, the Book of Boba Fett, Squadrons, and Battlefront 2.
< >
3 Comments

Bosmeri  [author] Mar 4 @ 5:43pm
@Kiriyo-san: I honestly have no clue. I haven't even bothered with achievements in this game. Best suggestion is to play a little bit with this mod (or another music mod in general) enabled and see if you get any.