Store Page
Stellaris>  Workshop > Ryika's Workshop
This item has been removed from the community because it violates Steam Community & Content Guidelines. It is only visible to you. If you believe your item has been removed by mistake, please contact Steam Support.
This item is incompatible with Stellaris. Please see the instructions page for reasons why this item might not work within Stellaris.
Current visibility: Hidden
This item will only be visible to you, admins, and anyone marked as a creator.
Current visibility: Friends-only
This item will only be visible in searches to you, your friends, and admins. 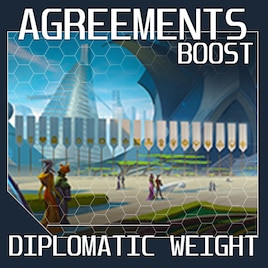 Ryika
Offline
See all 262 collections (some may be hidden)

In the unmodded game, Diplomatic Weight heavily favors wide empires, with little to no regard for whether anybody even likes you. If you're big enough, you'll dominate the Galactic Community, and small empires have little to no impact on the Community anymore. This mod attempts to shift the balance a bit more towards empires that actually engage in diplomacy.

These effects are capped at 10 Agreements each, for a maximum of +200% in each Category. I chose not to include Non-Aggression Pacts since they're not really "cooperative": You're not working together, but rather just agreeing not to attack each other.

The modifiers are recalculated at the start of each month, and appear in the list of empire-wide modifiers that you can access by clicking your flag icon in the top left corner of the UI.

This Mod was designed with maximum compatibility in mind. It does not override or alter any game files and as a result, it should be compatible with just about any other mod.
< >
19 Comments

General
- Rebuilt and updated to make use of the new variable features that were introduced in 3.1. This should make the code a lot more efficient, and opens room for future additions. A small negative side effect of the new implementation is that Modifier Names cannot contain the number of Pacts that a player has.

Bugfixes:
- Diplomatic Weight from Fleet Contribution is now properly applied to the Leaders of all federations, not just the Default Type.

Well, truth be told, as far as I can see, no updates were necessary, so I just updated the version number for the current patch.

This means this mod also still works with 3.0, if you have reverted to that game version.

Sardorim Jul 4 @ 9:06am
I like this. Gives more merit for being tall over wide.

Black Goat Jun 16 @ 10:30am
gotcha thanks for the elaboration and i appreciate the mod

Ryika  [author] Jun 16 @ 10:29am
If a wide empire manages to expand their territory while still maintaining a lot of diplomatic agreements, then it will still dominate, yes. I think this is reasonable, since you've essentially earned whatever sway you have over the galaxy at that point, and should probably be able to throw your weight around.

The goal of this mod is largely to make it so empires that do not manage to maintain diplomatic relations are somewhat less influential in the Galactic Community compared to those that do, and more broadly to make those pacts more interesting and rewarding.

Balancing "tall" and "wide" diplomatic empires would probably require a much larger overhaul of how the mechanics behind Diplomatic Power work, but that is not my goal with this mod.

Black Goat Jun 16 @ 8:50am
really good idea for a mod as I hate how dominate wide empires can be just by the size

not really convinced this modifier will address the problem if it doesn't come with some kind of size cap for empires getting this bonus - i think the 10 cap for the bonus from any one aggrement type is a good idea - but with the way this works, won't wide non-genocidal empires just get these bonuses as well?> effeictively canceling out much of the weight tall, diplomatic countries might gain from the mod?
< >