Store Page
Stellaris >  Workshop > I'm A Distraction!'s Workshop
This item has been removed from the community because it violates Steam Community & Content Guidelines. It is only visible to you. If you believe your item has been removed by mistake, please contact Steam Support.
This item is incompatible with Stellaris. Please see the instructions page for reasons why this item might not work within Stellaris.
Current visibility: Hidden
This item will only be visible to you, admins, and anyone marked as a creator.
Current visibility: Friends-only
This item will only be visible in searches to you, your friends, and admins. 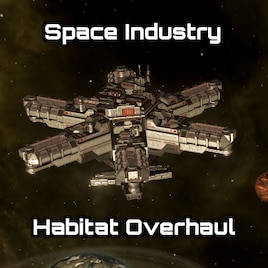 I'm A Distraction!
Online
See all 157 collections (some may be hidden)

This item has been added to your Subscriptions. Some games will require you to relaunch them before the item will be downloaded.
Description
Features
Space Industry (Habitat Overhaul) updated to 3.4 for all your Habitat loving goodness.

Compared to 3.4, SIHO allows you to gain mineral and energy habitats from a wider variety of planet(oids), allow habitats to be placed on asteroids or stars, and allow habitats to scale deeper into the game with technology and traditions improving your Habitat districts as well. New to the 3.0 version, Habitats will also work in tandem with your colonies beneath them. And in the 3.4 version, Habitats and Orbital Rings can co-exist, with most bonuses from your Orbital Rings applying to the Habitat as well.

Worlds and Habitats Working In Concert
Habitats will now provide special bonuses towards your colonies, reflecting industries that are more an extension of the planet's economy rather than some rural rough neck spacers wrangling rocks in your Belt. Habitats above a colony (or a gas giant that a colony is a moon of) will provide a special deposit to themselves and your colony, depending upon the Districts of your Habitat. In addition, Habitats will gain an additional district slot for being in orbit of larger, more established colonies (+1 max districts for a Major Capital, and +2 max districts for a System Capital).

Context Dependent Districts
Rather than just checking for resource deposits, habitats will also check for the type of planetary body they're built upon. Asteroids and most rocky planets allow for the astro mining districts. Ice asteroids, gas giants, toxic worlds, and luminous stars allow the generator district. And collapsars, shrouded worlds, and shielded worlds can support science districts.

Habitats can still not be built over moons, however any unlocked districts or deposits the moon would have given the habitat are added to any habitats built over the primary planetoid.

An Administration and Temple District have been added, allowing habitats to fully flesh out their specialist flexing with unity production in orbit.

Seamless Transition
You no longer need to build a colony ship and park it over to your newly constructed habitat. As soon as your habitat is finished building, it'll auto colonize with your Empire's main species, reflecting the growing population of space miners (and administrators) that will surely welcome new fresh faced immigrants who didn't realize the toil it took to turn a dead space rock into a home for the family.

Deposit Scaling Modifiers
Habitats above mineral, energy, or science deposits will receive a bonus towards that resource, equal to 5% times the size of the deposit.

Late Game Habitats
Habitats in 3.0 suffer. But on top of new issues (I'll see what I can do, but some will involve not being modding friendly to other, potentially popular mods!), they still suffer in the mid to late game compared to planets because of how lackluster their city districts and capitals are compared to their planetary cousins. From technologies and traditions, planetary city districts gain the same housing as habitat cities, in addition to two clerks. This leads to a residency crunch as the late game approaches.

SIHO addresses this by making sure that the habitat city district will always be 50% better than their planetary counterpart. The housing of your habitat city district will increase by one with each city technology, and 2 for the prosperity tradition (to a maximum of 12), and also produces two clerks (with a third unlocked by the relevant prosperity tradition). In addition, Habitat Manufacturing Districts will provide 2 Metallurgists and 1 Factory worker by default, with Factory habitats shifting to 3 Factory Workers, and Foundry habitats shifting to all 3 Metallurgists.

Orbital Ring Goodness
Considering Orbital Rings overlap with my intentions for Habitats (being associated and boosting the economy of the local colony) its only right I did a bit of tweaking here as well. The two can no co-exist, and furthermore, the benefits of an orbital ring will apply to the habitat above them as well. In addition, a new Orbital Ring Module, Solar Arrays, is avaliable once the third technician technology is researched, creating more technician jobs on the planet below.

I have further ideas for Orbital Rings, but they may or may not be apart of this mod in the future, or as part of a greater economy overhaul I got in the back burner. (Because Kuat, the Torus, and Iron Ring should definitely be more productive ship building wise than some large starbase a few systems over).

Compatability
Certain habitats will have more districts than the UI will normally show (looking at you, Gas Giants) and will require a planet view mod of your choice that can handle six or seven districts. This can be overcome in vanilla by going to replace an already built district, giving you the full choice of districts to swap too (although they can't be seen).

The following vanilla files were overwritten with this mod;
03_habitat_districts
15_orbital_ring
habitats

Special Thanks and Other Projects
Stellar Pioneers My contribution to the Stellaris 2020 Mod Jam finally updated to current day Stellaris!

Special thanks to the Stellaris Modding Den discord channel for helping me through with any questions I've had since starting to try my hand at modding.

Special thanks to MrFreake, for creating and accepting me for the Stellaris Mod Jam, which gave me an opportunity to refine my modding skills and inspire some of the new mechanics which will be ported into SIHO!

Thanks to SushiSquid for writing the new code for reading the deposits and translating it to the resource bonuses for habitats.
< >
130 Comments

I'm A Distraction!  [author] Just now
Got everything updated, but I'm having to wrestle with the Stellaris launcher to get the update out. Should be fixed up in the next few hours.

I'm A Distraction!  [author] 1 hour ago
Ah yes, completely forgot about that. For some reason I just presumed that would be handled as a modifier on the designation (despite the fact that's not how industry districts worked, derp).

I probably will change it to replace the farmer, and I'll get on that all in a bit.

Daedwartin 14 hours ago
1 more thing: None of your tradition effects work, as they are using has_active_tradition now instead of non_swapped_tradition

Daedwartin 16 hours ago
Also, while you are at it, I would also remember to make sure that the void dweller swap for public works that gives +1 building slots on habitats also gives them the +2 housing on habitats the non-swapped tradition gives. Its a bit silly that non-void dwellers can get 2 more housing on habitats then the people who have lived on them longer than they can remember. Your already losing out on planet-side housing due to said swap.

Daedwartin 16 hours ago
Actually, there is. You can now set stations to Hydroponics Stations, which will actually swap 2 housing for a Farmer job on Habitation Districts. Since obviously you overrode the habitat districts file, this designation now does nothing.

Personally, If I was to work this in, I make it so while you lose the 2 housing still, you instead switch the clerks out for farmers. That way it fits the theme of having the habitation district now being your farming district for habitats.

I'm A Distraction!  [author] Jun 17 @ 1:59am
For those that were asking for it, I've also finally gotten the update to Stellar Pioneers done. You can find it here: https://steamcommunity.com/sharedfiles/filedetails/?id=2822076182

I'm A Distraction!  [author] Jun 10 @ 9:28pm
Nevermind, thanks again to some help from the Stellaris Modding Den discord channel, got orbital rings to provide (most) of their benefits to habitats in orbit as well.

So now you can have a mining world, a forge world above it, as well as an orbital ring increasing both mining and alloys to create some truly spectacular vertical production chains.

I'm A Distraction!  [author] Jun 10 @ 5:05pm
Well, I've gotten habitats and orbital rings to coexist, but unfortunately it looks like Stellaris lacks the code to allow you to check what buildings or modules a habitat has... So my planned feature of having planetary rings also buff the habitat seems quite impossible.

I'll update it to at least allow that and fix whatever issue a code change did.
< >