Store Page
Left 4 Dead 2>  Workshop > Bunslinger's Workshop
This item has been removed from the community because it violates Steam Community & Content Guidelines. It is only visible to you. If you believe your item has been removed by mistake, please contact Steam Support.
This item is incompatible with Left 4 Dead 2. Please see the instructions page for reasons why this item might not work within Left 4 Dead 2.
Current visibility: Hidden
This item will only be visible to you, admins, and anyone marked as a creator.
Current visibility: Friends-only
This item will only be visible in searches to you, your friends, and admins. 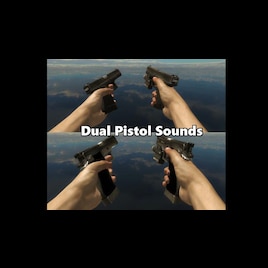 See all 20 collections (some may be hidden)

This item has been added to your Subscriptions. Some games will require you to relaunch them before the item will be downloaded.
Description
Sounds meant to go with either of my dual pistol mods. This makes the pistols both use the same firing sound, as well as fixes the reload sounds still using the ones from L4D1.

You can use these without the Dual P220s or Dual Glocks mods if you want, they're not actual requirements, I just have it listed as one to make people aware of it since it's in the screenshots.

If you're here FROM the Dual P220s or Dual Glocks mods, please be aware this isn't actually required to use it. I just made this a separate file just in-case people want to use their own custom sounds and don't want to edit the mods, or don't know how.

I consider this one the "canonical" firing sound (the one that the single pistol makes in the vanilla game). This sounds heavier and more powerful than the glock's firing sound. You can download that here if you prefer both pistols use that sound instead.

I consider it canonical because in the vanilla game, the single pistol makes this sound, and then the glock does when you pick it up, so to me, it's the one Valve probably would've went with had they not left a failed experiment in the game with the dual pistols switching sounds and everything.
< >
4 Comments

Mr. FlashyFace Apr 5 @ 12:35pm
any chance you can make a variant that just replaces the l4d1 dual pistol sounds

Bunslinger  [author] Oct 28, 2020 @ 7:03pm
by deagle do you mean the p220? also i can't actually do that since the firing sounds are tied to the order in which the pistols fire, which causes this issue where the right pistol will be out of ammo but your last 2 shots will come from it. it's honestly just a whole mess which is why i opted to make the two pistols the same instead