Store Page
Rivals of Aether>  Workshop > ChairGTables's Workshop
This item has been removed from the community because it violates Steam Community & Content Guidelines. It is only visible to you. If you believe your item has been removed by mistake, please contact Steam Support.
This item is incompatible with Rivals of Aether. Please see the instructions page for reasons why this item might not work within Rivals of Aether.
Current visibility: Hidden
This item will only be visible to you, admins, and anyone marked as a creator.
Current visibility: Friends-only
This item will only be visible in searches to you, your friends, and admins. 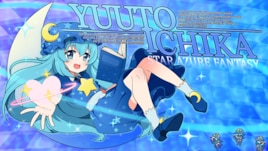 ChairGTables
Offline
See all 2527 collections (some may be hidden)

This item has been added to your Subscriptions. Some games will require you to relaunch them before the item will be downloaded.
Description
From the Steam game Super Ledgehop: Double Laser, Yuuto Ichika has arrived with a new set of spells! Created by the LAME Dimension development team themselves, they’ve brought Yuuto here to show you that she’s done making friends, and now she’s here to make rivals! Coming in from Shinecoast city, she explores the world of Aether in hopes of getting a lead on her missing family. Do you have enough willpower to utilize Yuuto’s novice skills in magic to defeat her foes to get intel for her quest?[www.lamedimension.moe]

Yuuto is back with her signature handy rock. Yuuto’s rock has been present in many LAME Dimension games to reduce the strain of her spells on her body, but since Yuuto is now a more experienced student in magic, the utility of her rock has expanded even more! By pressing Neutral B, Yuuto will set her rock on the air. From here, you have multiple options. By pressing Neutral B again, Yuuto will command her rock to shoot bullets in a diagonal pattern. You can reverse the direction of the bullets by holding Neutral B instead.

Rocks, however, are meant to be thrown at enemies. You can hit the opponents with your rock by hitting it on the air. The direction the rock goes is determined by the move you use. You can also ride the rock by jumping on top of it. This will let you zoom towards your opponent to deal massive knockback!

Yuuto also has access to her signature Flame Road by performing Side B. This spinning set of flames traps the opponent until the flames combust into a large explosion! These flames are essential for Yuuto’s main combo game, as you can follow up with the flames with almost any other attack!

But Yuuto simply can’t just rely on her newer spells, she can still count on her first spell. By using an upgraded form of her Psychokinesis, she can perform her Up B to summon a spaceship and blow it up. This Psycho Control spell lacks in recovery, but it is a powerful move that can devastate the opponent when caught offguard.

To learn more about Yuuto’s moves, please visit this page.[roa-workshop.fandom.com]

Compared to the rest of the tournament legal workshop roster, Yuuto is generally slower, meaning that player might think twice before throwing attacks blindly. Yuuto’s attacks and setups provide easy combo follow-ups and kill confirms, but whiffing will leave Yuuto in great danger.

Yuuto’s main tool to start combos is her Side B. Players will have enough time to react and throw another attack before the explosion occurs. Yuuto’s Bread And Butter is to perform Side B then set up a rock to smack it towards the opponent. The player can also use Side B as a kill confirm if they react quick enough to connect a smash attack with it.

Despite Side B being very essential, Yuuto’s Neutral B is even more important to her main game plan. Connecting smash attacks is easier with the bullets of her rock. Neutral B also provides a small vertical boost when used midair, making it safe to use while you are recovering. This means that you can place a rock near the ledge during your recovery and have it shoot your opponent. However, this is not the main use of Neutral B offstage.

Due to Yuuto’s poor recovery with Up B, this can be compensated by summoning a rock and reaching it with Up B so that you may ride the rock back to the stage. This can be unsafe, however, when your opponent starts expecting it often. An alternative way to recover in a horizontal manner is to use your Down Air, which boosts you slightly upwards to give you more air time for horizontal air movement.

D YellowMadness Feb 18 @ 5:01pm
Something inconsequential but interesting is that when fighting Boss Hikaru, the "targeting" window shows Yuuto with a red shirt & her shirt actually turns red for the Time Break phase but returns to normal afterward.

None of her alts look like that so I don't know why it happens. Hikaru also gets a red shirt when copying Yuuto's taunt. It also happens if Abyss Hime cuts Yuuto in half, which makes sense, I guess.

lurk Nov 19, 2020 @ 6:10pm
I loved Super Ledgehop Double Laser and now, I love Yuuto as a rival! I like the way she plays (I practically main her now, I'm a sucker for zoners and setup characters) and feels pretty balanced for me, keep up the great work!

Alicia von Verdun Jun 29, 2020 @ 5:11am
As someone who saw the inception and controversy of this character first-hand, I am genuinely perplexed it has come this far.

grimmd4ys Jun 17, 2020 @ 10:14am
I immediately went to check out Super Ledgehop after learning this character, and it was one of the best dollars I've ever spent. Wicked cool.