Store Page
Cities: Skylines>  Workshop > Darf's Workshop
This item has been removed from the community because it violates Steam Community & Content Guidelines. It is only visible to you. If you believe your item has been removed by mistake, please contact Steam Support.
This item is incompatible with Cities: Skylines. Please see the instructions page for reasons why this item might not work within Cities: Skylines.
Current visibility: Hidden
This item will only be visible to you, admins, and anyone marked as a creator.
Current visibility: Friends-only
This item will only be visible in searches to you, your friends, and admins. 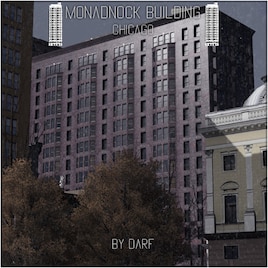 Darf
Online
See all 906 collections (some may be hidden)

This item has been added to your Subscriptions. Some games will require you to relaunch them before the item will be downloaded.
Description
Please leave a vote or comment if you download this asset! This is a lvl 3 RICO office based on the northside of the Monadnock Building in Chicago.

Become a Patron and support my work!

About the model
A new model based of one of the very first and most known Chicago skyscrapers. This is quite a heavy model with about 15442 tris and a 3072x512 texture. Normal mapped, illuminationmap and specularmapped. This is like a 60 meter brick wall that should stand on it's own. All sides are detailed and the buildingfootprint is 62mx20m so quite big. Overall not a very hard building to model, but, because it's all brick quite hard to texture, the color of the brick looks a lot different on all angles. I ended up adding a lot of details. There's also a lot of roofjunk.
LoD is around 269 tris, 512x128.

You can always follow my assetcreations on the Simtropolis forums: http://community.simtropolis.com/forums/topic/68841-darfs-buildings-the-dorilton-new-victory-theater/ or on sketchfab: https://sketchfab.com/sannie01

RICO
This building is RICO enabled, it has 800 workers with RICO installed.

About the building
The Monadnock Building (historically the Monadnock Block; pronounced /məˈnædnɒk/ mə-NAD-nok) is a 16-story skyscraper located at 53 West Jackson Boulevard in the south Loop area of Chicago, Illinois. The north half of the building was designed by the firm of Burnham & Root and built starting in 1891. The tallest load-bearing brick building ever constructed, it employed the first portal system of wind bracing in America. Its decorative staircases represent the first structural use of aluminum in building construction. The south half, constructed in 1893, was designed by Holabird & Roche and is similar in color and profile to the original, but the design is more traditionally ornate. When completed, it was the largest office building in the world. The success of the building was the catalyst for an important new business center at the southern end of the Loop.

The building was remodeled in 1938 in one of the first major skyscraper renovations ever undertaken—a bid, in part, to revolutionize how building maintenance was done and halt the demolition of Chicago's aging skyscrapers. It was sold in 1979 to owners who restored the building to its original condition, in one of the most comprehensive skyscraper restorations attempted as of 1992. The project was recognized as one of the top restoration projects in the US by the National Trust for Historic Preservation in 1987. The building is divided into offices from 250 square feet (23 m2) to 6,000 square feet (560 m2) in size, and primarily serves independent professional firms. It was listed for sale in 2007.

The north half is an unornamented vertical mass of purple-brown brick, flaring gently out at the base and top, with vertically continuous bay windows projecting out. The south half is vertically divided by brickwork at the base and rises to a large copper cornice at the roof. Projecting window bays in both halves allow large exposures of glass, giving the building an open appearance despite its mass. The Monadnock is part of the Printing House Row District, which also includes the Fisher Building, the Manhattan Building, and the Old Colony Building.

When it was built, many critics called the building too extreme, and lacking in style. Others found in its lack of ornamentation the natural extension of its commercial purpose and an expression of modern business life. Early 20th-century European architects found inspiration in its attention to purpose and functional expression. It was one of the first buildings named a Chicago Architectural Landmark in 1958. It was added to the National Register of Historic Places in 1970, and named as part of the National Historic Landmark South Dearborn Street – Printing House Row North Historic District in 1976. Modern critics have called it a "classic", a "triumph of unified design", and "one of the most exciting aesthetic experiences America's commercial architecture produced".

BillyShabindigo Aug 20, 2019 @ 5:33am
Between you and Honker, I'm hoping one of you recreates the Thompson Center on Randolph in Chicago

Yorker Aug 16, 2019 @ 11:48am
Very cool and high-quality buildings you get!) Lot more would buildings from Chicago! I'm just trying to copy this town. Can you add Chicago Central Illinois Secretary of state to the facility?