Store Page
Stellaris>  Workshop > MrFreake's Workshop
This item has been removed from the community because it violates Steam Community & Content Guidelines. It is only visible to you. If you believe your item has been removed by mistake, please contact Steam Support.
This item is incompatible with Stellaris. Please see the instructions page for reasons why this item might not work within Stellaris.
Current visibility: Hidden
This item will only be visible to you, admins, and anyone marked as a creator.
Current visibility: Friends-only
This item will only be visible in searches to you, your friends, and admins. 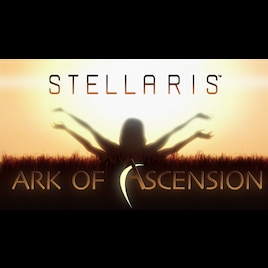 MrFreake
Online
See all 31 collections (some may be hidden)
You need DLC to use this item.

This item has been added to your Subscriptions. Some games will require you to relaunch them before the item will be downloaded.
Description
**** Updated for 2.5.0 ****

Ark of Ascension is a Stellaris take on a king of the hill style map mode. Players have to capture the planet at the center of the galaxy. After the Ark of Ascension dig site is completed, free sentient pops (bio and machine) will ascend (read: die) once a month.

Whoever has the most pops ascended at the end game date wins the game, and their ascended pops return as the Unbidden.

Each player at the start of the round picks a hero unit, these hero units each have unique buffs and debuffs that can alter the course of the battle. When hero units level up they become more powerful and unlock new abilities.

Each player starts in their own player cluster, defended on one side by a citadel, and a wormhole connection to the core.

When the citadel is destroyed, the hyperlane connection to the player cluster disappears. It is possible to recapture this system in a war and the hyperlane will reconnect.

The wormhole connection from the player cluster should only allow that player’s ships to pass through. This may be bugged, however do not enter player clusters.

Each cluster starts with a homeworld, eucemenopolis, and the same resources as every other player cluster. In the outer ring, each player gets a relic world spawn, and a mob spawner.

Each hero has three abilities that will unlock as the unit levels, it also increases in fleet power. At lower levels these ships are extremely vulnerable to small-sized ships, and should be escorted with corvettes to keep them from getting swarmed. If a hero unit is killed, it will lose all progress towards its current level, and respawn back at the homeworld in 90 days.
After respawning the hero unit gets -100% weapon damage, -100% shield regen, and -100% armor regen for 1 year.

Hero abilties are activated via buttons added to the fleet pane. The hero also will show it’s level, and give the option to level up (if available).

After completing the dig site, the player will gain access to the Ark of Ascension. The Ark currently provides +15% unity output, as well as automatically ascends one free pop a month on The Stairway. Taking the planet will immediately allow a new player to begin ascending pops. While there are certain events added to stop the stairway from becoming uncolonized, it may be possible through a combination of bombardment and purging to depop The Stairway. Recolonizing will cause the Ark to begin ascending pops again.

The Ark will not ascend the last pop off of The Stairway.

The player with the most pops ascended at the end game start date will be the winner. Their pops will then return from the higher plane as the Unbidden and they can complete their cleanse of the galaxy, even though the game is technically over, bonus points for beating a player as the crisis.

-using the retreat button on the hero unit while in combat can result in it taking damage, getting destroyed and not respawning

-observer host will always cause a desync. Host should be a player, and observers need to hot join after the game is launched

-observer buttons do not work for the leaderboard, 5 year pulse pop-up will have to do

-hyperlane bypass in the core system may under certain circumstances allow hostile ships to pass through -- Do not do this!

-it may be possible under some conditions to depop the stairway


############
Thanks to everyone who played during the weeks of testing, doing countless restarts and playthroughs, I love you!

MrFreake  [author] Oct 30, 2019 @ 5:02am
@Marble The AI will use the hero units, but will not use any abilities (yet), nor will it ascend pops (yet)... apart from that it should be fine.. although it will run slower than with just humans playing.

Marble Oct 28, 2019 @ 2:54pm
my group only has 4 people can we fill the remaining slots with AI or will they be even more useless than normal?

BoltGriffen Oct 18, 2019 @ 1:15pm
please update for the current version of stellaris so i can continue my game

Byrios Sep 26, 2019 @ 9:37am
Does the map scale with how many players are spawning? Ie: If I have 6 friends who play MP together, will there only be 6 starting locations?

MrFreake  [author] Sep 25, 2019 @ 4:11pm
In the next update there should be an option to stop the Ark from spawning.. also will include more galaxy customization options. Appreciate everyone's interest in this project :)