Store Page
Hearts of Iron IV>  Workshop > Ran Mitake's Workshop
This item has been removed from the community because it violates Steam Community & Content Guidelines. It is only visible to you. If you believe your item has been removed by mistake, please contact Steam Support.
This item is incompatible with Hearts of Iron IV. Please see the instructions page for reasons why this item might not work within Hearts of Iron IV.
Current visibility: Hidden
This item will only be visible to you, admins, and anyone marked as a creator.
Current visibility: Friends-only
This item will only be visible in searches to you, your friends, and admins. 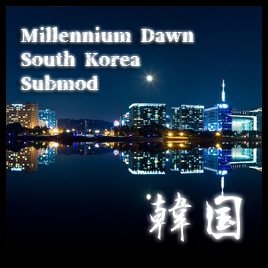 Ran Mitake
Offline
See all 18 collections (some may be hidden)

This item has been added to your Subscriptions. Some games will require you to relaunch them before the item will be downloaded.
Description
[For Millennium Dawn Mod 1.7]
First, I am not an English speaking person and can not speak English. This mod is a simple submod, but there may be grammatically incorrect English. I'll fix it if you point.

This submod adds a whole new South Korea national focus and national idea for Millennium Dawn 1.7 users. In addition, some of the original Millennium Dawn's south korea errors have been corrected.

[Modified data]
- New National focus of South Korea
- Added New South Korean politicians. (Roh Moo-hyun, Lee Myung-bak, etc.)
- The 2000 scenario changed Korea's election from once every four years to once every five years.
- Some politicians were given new portraits. (Sim Sang-jung, etc.)
- Politicians who were in the wrong party, were reassigned to the right party. (Hong Jun-pyo)
- Other minor modifications

Ran Mitake  [author] Feb 7 @ 7:37am
Since South Korea's focus has been released on teasers, I expect it to be announced soon.

Ran Mitake  [author] Feb 7 @ 7:35am
@kkutaz504 Since Millennium Dawn dev team is making an official South Korea focus, I don't think I need to make a submod focus for South Korea. The development is currently discontinued.