Store Page
Stellaris>  Workshop > Vaeringjar's Workshop
This item has been removed from the community because it violates Steam Community & Content Guidelines. It is only visible to you. If you believe your item has been removed by mistake, please contact Steam Support.
This item is incompatible with Stellaris. Please see the instructions page for reasons why this item might not work within Stellaris.
Current visibility: Hidden
This item will only be visible to you, admins, and anyone marked as a creator.
Current visibility: Friends-only
This item will only be visible in searches to you, your friends, and admins. 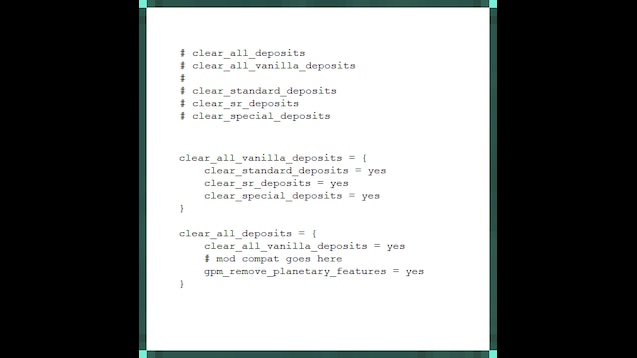 This item has been added to your Subscriptions. Some games will require you to relaunch them before the item will be downloaded.
In 1 collection by Vaeringjar
Vaeringjar's Mods

This modding utility is a substitute for vanilla indiscriminate "clear_deposits" effect, giving more control over what deposits to clear.
The most straightforward example use-case is as a solution to unwanted loss of modded deposits upon terraforming into ecumenopolis, which is included in the mod, making more complicated workarounds unnecessary.

> Scripted_effects included:
clear_standard_deposits clear_sr_deposits # sr = special resources clear_special_deposits # such as from anomalies and events clear_all_deposits # simply calls the above 3, along with any additional equivalent scripted_effects from other mods for compatibility clear_all_vanilla_deposits # as above, but excluding any added by mods
> You can mod what specific deposits are cleared or not, by directly editing a scripted_effect.
> You can mod which scripted effects are used, for example this mod includes swapping vanilla "clear_deposits" for "clear_all_deposits" in the ecumenopolis decision and in the hive/machine -worlds terraforming on_action event.
> Keep in mind this only relates to "clear_deposits", not "reroll_deposits" (which is used by "reset_planet" and "reroll_planet" vanilla scripted effects).

This utility is compatible with everything, as other mods' overwrites take priority.

Acknowledgements:
This mod is a result of fixing a feature/deposit-loss bug in my Mastery of Districts mod. Thank you Astral, ホールドタイト and starchitect for your feedback.

Vaeringjar  [author] Mar 18 @ 1:55am
@petrovytsh
Yeah I didn't update it for Ancient Relics as I barely played that version, and only bought the DLC after some time too. I'll have a look at it in the coming weeks.

When Baol Seeds are distributed to the precursor capital, all special district are removed.

Then there's the modding ethos, where crediting work is a matter of respect for the community, and where cooperation and where are of mutual interest. The plagiariser has shown a complete disrespect for what makes a modding community healthy.

It's 100% plagiarism, absolutely no doubt about it. Now I've given him the opportunity to address this, and in the process result in a better mod/patch than it currently is, but to be honest I should be able to just straight up issue a takedown of his mod.

If you notice the order of the deposits in it, including the spacing between the groupings, it is the exact same.
Take the filename "clear_deposits_replacement.txt". There's no chance in hell someone just randomly gives a file the exact same name, much less having the exact same code & writing style in it.
Then, the logic of how the mod works, he overwrites the same decisions in the same place with the same method, and does the same for the on_action_event. Even the naming of the scripted effect follows the logic of the naming I gave mine.
Then there's the idea and implementation. The solution to this problem is one I came up with and implemented as can be seen in this mod.

petrovytsh Jul 8, 2019 @ 4:55pm
Hard hit. In fact, most likely - a coincidence. The content of the file is completely different - different style and syntax of scripts.

Vaeringjar  [author] Jul 8, 2019 @ 4:46pm
@petrovytsh
Nice find!
It is incompatible with it because that mod is straight up plagiarism & uncredited use of my mod. The author, instead of using this utility as intended, an utility upon which many mods can work, he straight up didn't even rename the core file. I've invited him into addressing this issue.

Plerion Jul 8, 2019 @ 12:24pm
@petrovytsh - Use something like Paradoxos Mod Manager to look for conflicts. You may think some mods do not conflict, but many times they do.