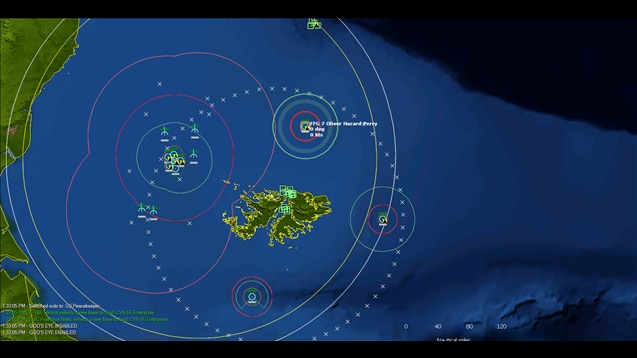 Tookatee
Offline
See the collection (may be hidden)

This item has been added to your Subscriptions. Some games will require you to relaunch them before the item will be downloaded.
Description
April 1982
American President Ronald Regan is hosting a Peace Summit between Argintina and the UK leaders. A Cease Fire is in effect for the next 24 hours.
The United States, being associated in Treaties with the UK and Argentina, has decied to enforce an Exclusion Zone around the Falkland Islands.
A No Fly/Exclusion Zone is in effect within 100nmi of the Falkland Islands.
Naval units currently within the Exclusion Zone must anchor in place.
The United States will ensure the Exlusion Zone and Cease Fire is observed by both sides.
Weapons Free; Engage all military vehicles not at anchor within the Exclusion Zone.


This version essentially makes it so that the aircraft are already armed upon mission start (as any commander would have done before attempting to secure an exclusion zone), improves the positioning of the ships to a more sensible fleet formation (allows the overlapping firing arcs of the various ships to support each other, rather than how the original scenario allows any one ship to be overwhelmed rather easily), adds era appropriate helicopters to each capable escort ship, and changes the original peacetime loadouts for the F-14s to combat loadouts (As no sensible commander would equip his aircraft with peacetime loadouts in a scenario that has a high likelihood for combat to breakout.) I have also taken the liberty of flicking on all the scenario features, such as detailed gun fire, aircraft damage, and communications disruptions.
< >
1 Comments