Store Page
Besiege >  Workshop > wang_w571's Workshop
This item has been removed from the community because it violates Steam Community & Content Guidelines. It is only visible to you. If you believe your item has been removed by mistake, please contact Steam Support.
This item is incompatible with Besiege. Please see the instructions page for reasons why this item might not work within Besiege.
Current visibility: Hidden
This item will only be visible to you, admins, and anyone marked as a creator.
Current visibility: Friends-only
This item will only be visible in searches to you, your friends, and admins. 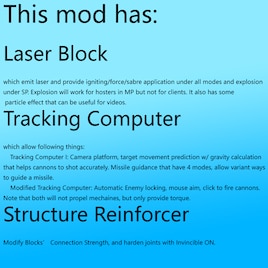 wang_w571
Offline
See all 312 collections (some may be hidden)

This item has been added to your Subscriptions. Some games will require you to relaunch them before the item will be downloaded.
Description
So this is supposed to be a mod with 6 blocks:
Laser
Missile Guidance Computer / Tracking Computer
(Testing, maybe not stable) Modified Tracking Computer
Structure Reinforcer
(N/A) Pilot Panel
(N/A) Drone Controlling Block
(N/A) Drone Block

Laser block with collidable laser beam and laser sabre mode available now!
Laser sabre mode: The laser will destroy all joints on the block it touches.
Laser 's "Add Collider" option is under Misc. Recommended using with "Collider's physics Affect this block" as it's more stable, but it disables all other abilities (kinetic, explosion, etc.)


the other blocks will be available soon™

Note that laser block's explosive ability is not going to work well under MP.
Note that because of network issues, locking with tracking computer can be difficult on high-speed moving objects. (The speed of tracking computer won't matter)

Modified Tracking Computer/Missile Guidance Computer:
(except camera tracking computer)
Precision slider decides how accurate the point it can calculate.
Calculation Per Second decides the frequency about updating the new point per second.
Cannon Slider is about calculating the speed of the projectile, which is normally the cannonball, so edit this slider to the same value to the power slider on the cannon that has been mount on it will provide better accuracy. You can also mount other weapon on the tracking computer block, just calculate by yourself that every 58 increased speed is 1 increased on the Cannon slider.


Modes(Only for Tracking Computer):
Turret Tracking Computer Mode:
Usually for calculating and rotating for aiming moving targets while the block itself is on a platform like a plane or a tank.
Usually mount cannons on the block.
Use same power slider as the cannon on it. Use 0 when you are using laser blocks for weaponry.

Missile Guidance Computer Mode (Default):
Usually for calculating and rotating for a following moving target while using with proplusion moudles and warheads.

Camera Tracking Computer Mode:
Will look at the target uprightly. Usually use with first-person mode camera.

Lone-Wolf-Destiny May 22 @ 1:42pm
mod works just fine for me, but support back would be nicee

Dr.Evil Apr 11 @ 2:22pm
let us hope that this mayazing mod will soon work again, and the destruction of explosions will be viseble again... i have nothing ells to say then: pleas creator, pleas fix the explosion effect as soon as you have time

guess we depend on it

SuperSpaceMan34 Apr 2 @ 3:25pm
Are there any mods that conflict with this, or is it time for the mod to be updated?
The explosions for the lasers don't register, but the physics do and the block is flung away(When close enough).

утапок -00_00- Mar 23 @ 3:06pm
I want to ask you this. The rocket guidance computer collider changes its position at the beginning of the game. is there any way to fix this?
screenshots to make it clear what I'm talking about
1- https://steamcommunity.com/sharedfiles/filedetails/?id=2783649533
2- https://steamcommunity.com/sharedfiles/filedetails/?id=2783649603

fewilcox Mar 15 @ 3:36am
Is it possible to use the tracking computers mouseless? I've been playing HOTAS lately thanks to Joystick Mod, which leaves me without a third hand for the mouse.

wang_w571  [author] Feb 2 @ 8:11am
@Cyberpunk Kitsune that might be because the version num is different, but I can't help much about it
@dylbie @kajJyn maybe I will do those, maybe not :( sorry but I am not planning on support besiege

Cyberpunk Kitsune Jan 29 @ 8:33pm
Mod doesn't seem to be detected by Besiege itself. Tried redownloading it multiple times and every time I load a creation that uses this it says I don't have it installed.
< >