Greenlight > Games > Etienne Zizka's Workshop > Super Toaster X: Learn Japanese
Greenlight is being retired. For more information on how to submit games to steam, refer to this blog post.
This item has been removed from the community because it violates Steam Community & Content Guidelines. It is only visible to you. If you believe your item has been removed by mistake, please contact Steam Support.
This item is incompatible with Greenlight. Please see the instructions page for reasons why this item might not work within Greenlight.
Current visibility: Hidden
This item will only be visible to you, admins, and anyone marked as a creator.
Current visibility: Friends-only
This item will only be visible in searches to you, your friends, and admins.
Super Toaster X: Learn Japanese
Description Discussions1 Announcements6 Comments30 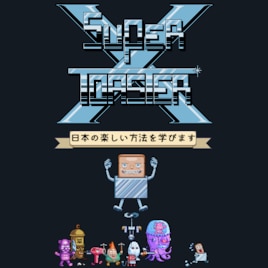 This week, Jeff has been hard at work coding on the game in order for us to integrate our backlog of things.

The pronunciation sounds should be implemented this week.

The card mastery system is already coded in as well. We're aiming for a new release next week.

A special thanks to eplipswitch for providing his Japanese expertise and voice for the pronunciations. You can find more about his translations and other work here:
https://rpgmaker.net/users/eplipswich/

In other words, game is progressing nicely.

So, let's have a look at the various foes you'll encounter in the game, shall we?

The Hell Dryer was originally manufactured by Doctor Dough as a docile servant to do various chores around his estate. It was eventually upgraded with a poisonous breath and an integrated Mark IV Rocket launcher to fend off trespassers.

The gooball was Doctor Dough's first attempt at cloning. What first seemed to be a failed attempt at playing god, turned out to be a rather effective weapon once tamed. Don't be fooled by it's cute demeanor, its shape changing ability makes the gooball a foe to reckon with!

The Gooball's shape changing ability was somehow reproduced in a vary rare (and expensive) metal alloy designed by Doctor Dough's top chemists. This allowed the prototype Drillah to be build on a small scale. It was programmed for one purpose: EXTERMINATE ALL BREAD!!!

A brilliant mix of a submarine based on a piranah's anatomy with a not so-brilliant flame thrower weapon for underwater battles. Faced with Doctor Dough's wrath, his engineers had no choice but to make the Subranah effective both underwater and on land.

The Razordog was once Doctor Dough's personal pet. Following its demise through old age, Doctor Dough used some (most) of his savings to build a literal army of the cybernetic dog. A close combat wreaking machine.

I wanted to announce that the game is now on Kickstarter:
https://www.kickstarter.com/projects/714585684/super-toaster-x-learn-japanese

Note that by backing the project right now, you'll be getting the full game at a discount compared to when it will eventually be released on steam.

To celebrate for this, we're providing a new build for the game. This new build has controller support (X Box). It also has a new input system which makes it easier to select your cards.

Thanks to everyone who has commented on the last build of the game. As you can see, your comments help us to make the game even better.

It's good to see 34 people following the game. Always motivating to see that number go up and interest increase.

September 3rd-September 30th Progress Report
The last three weeks has been about working on the game's kickstarter preparation and putting things together for a playable build of the game.

The build was postponed for a little while because there were certain features which I wanted to include, namely controller support and key binding. I decided to release the build without those features as I think it's only fair for people following the project to get a glimpse at the concept of the game by experiencing it firsthand.

The objective in releasing this build is to setup an open channel with you guys, read what you think and make improvements on all aspects of the game (if possible!).

Some questions you could answer

Any feedback will be read and considered. Giving descriptive negative feedback is definitely more useful when supported by examples and descriptions of course so that it's easier for us as a team to find solutions to whatever issues are reported.

Thank you for reading.
See all 5 comments

First of all I'd like to thank everyone who believes in the project and voted for the project as we've now been Greenlit. We'll do our best not to let you guys down by providing a quality, educational indie game.

I want to keep constant updates about the game and to establish a dialogue with the community. I think it's important to keep an open channel with the future players during development. It'd be arrogant to think that the only people who can have good ideas about the game are the three people currently part of the team.

(for those who are wondering, Devlog 91 isn't posted because it's a minor update and was therefore merged with this one. I want to stick to major development news for steam).

The idea of Whole Bread Will is "two faced" inspired" (from Batman). He's actually half whole, you can tell from his face.

"buy" allows you to buy vocabulary cards.
"sell" allows you to sell cards. This is especially useful when you've learned a card (mastered it for skill points). It's a good way to get cash back.

"forge" is the crafting aspect of the game. This is where you can basically combine vocabulary cards to get new, unique ones. The new cards are meant to combine the individual abilities of the cards used in the crafting. This is still a rough aspect of the game, so input from the community are always welcome.

What do you think makes crafting fun? What kind of elements would you like to see?

Graphic Update
As Jeff is progressing on the code, I'm taking this opportunity to revisit the game's graphics. Some of them were not to my liking as they were mostly placeholders for beta testing purposes.

Let me give an example:

The boxing ring before: 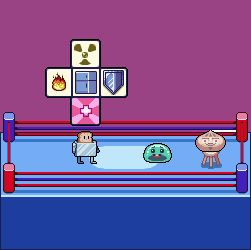 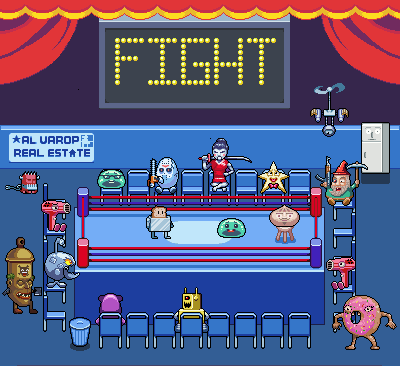 The Bread Cave
I've started putting the "Bread Cave" together. It's by no means finished at the moment but I thought I'd give a glimpse of the current WIP: 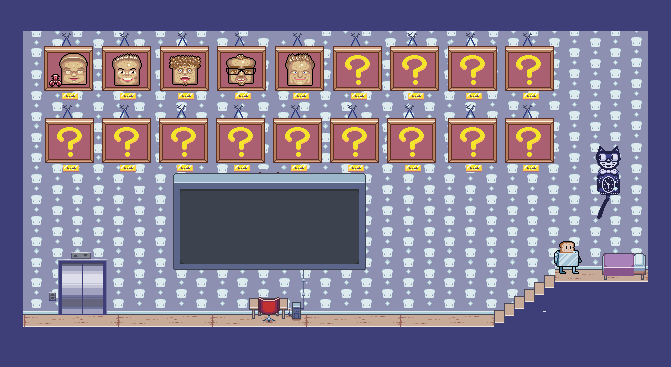 The idea is to have this place as your home base so to speak. The computer is to be used to access databases and the bed to rest and save your game. The portraits on the wall are to be for people who provided exceptional support on the game. They are based on real life photos.

Save Games and potential Challenge
Being a fan of difficult games myself like Dark Souls and I need to be careful about my own personal bias about this.

I'm currently considering about checkpoints and how they influence the difficulty of the game. I want to make sure save-scumming isn't an option as it ruins game balance and the challenge of the game. On the other hand, we need to make sure not to be too punishing either which would lead to frustration and ruin the fun.

What's Next?
Jeff Mann, the programmer, is currently working on tweaking the game's layout. This might not seem like much but it takes time to implement and every single change has to be weighed in carefully.

He is working this week on integrating the game's option menu as well: 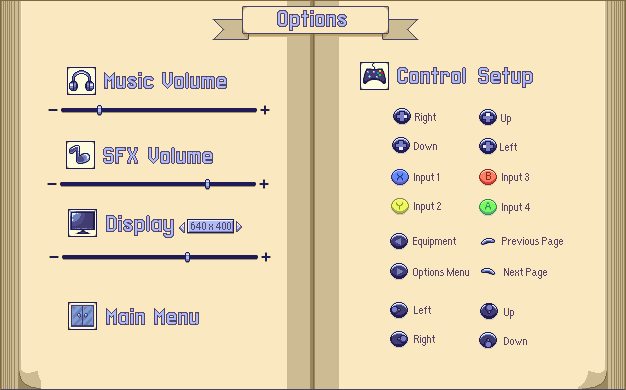 That's it for this week! Join in the conversation and let us know about your opinions about the game's development!