Greenlight > Games > Vae Victis's Workshop
Greenlight is being retired. For more information on how to submit games to steam, refer to this blog post.
This item has been removed from the community because it violates Steam Community & Content Guidelines. It is only visible to you. If you believe your item has been removed by mistake, please contact Steam Support.
This item is incompatible with Greenlight. Please see the instructions page for reasons why this item might not work within Greenlight.
Current visibility: Hidden
This item will only be visible to you, admins, and anyone marked as a creator.
Current visibility: Friends-only
This item will only be visible in searches to you, your friends, and admins.
Victory: The Age of Racing
Description Discussions7 Announcements9 Comments276 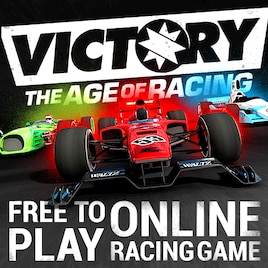 Vae Victis
Offline
See all 35 collections (some may be hidden)

View Victory: The Age of Racing in the store

We've been greenlit! Thanks to all our supporters, players and voters, we love you guys!

We'll now work hard to integrate the game in Steam as soon as possible.

We finally jumped through the rankings of Steam Greenlight, entered the Top 100 and we're now in the Top 50, at the #33 place. Thanks to the over 10.000 Steam players that voted us, we love you guys!

We hope to receive the official Greenlight in weeks and then we'll move to the Steam integration, thanks again to everyone who voted for Victory!

Read More
Description
Release date: Victory is now in Open Beta
Race in a world inspired by the open wheels racing scene, as you take your customized car around hairpin turns, swerve past your opponents, and accelerate towards the finish line.

"For those that like racing games with RPG elements, this has the potential to be an addictive title"
Massively

"A very unique online racing game set in a Post-Apocalyptic world. Players can build and customize their own car, changing everything down to the finest little details. Where Victory stands out is in its advanced driving physics and the way it handles driving in an online environment. A very cool racing game, and for any formula one fan you will feel right at home with the styles of the cars."
Mmogames

"A realistic driving model matched with an extreme car customisation thanks to the best car editor ever seen on a racing game."
Mmorpgitalia

Check out the game and play now in the Open Beta:
http://victorythegame.com

Realistic Car Physics
An easy to use realistic physics means an unprecedented car handling in a game for everyone that is both easy to learn and hard to master.

Multiple Control Methods
You can choose between gamepad, keyboard or the mouse as the primary control method. This gives the game a large compatibility and doesn't force you to always have the gamepad with you, we've worked hard to create the best keyboard controls available on the market for a racing game. Steering wheels support is coming in the next patch.

Fun and Easy Multiplayer
Victory is based on quick competitions where players gain experience points and collect different car items to increase their car's attributes and reach the top of the leaderboard.

Victory is a game for the casual racers that want more: a realistic car physics and a real racing experience with real time collisions, maintaining easy to learn game controls.

Victory is also a game for the hard core racers that don't have time for a full professional three hours race and want to race with a more casual and funny gameplay.

Then the Painting System gives the players an unprecedented level of freedom in choosing colors, apply decals and colorable shapes.

Like in a role playing game, you have to spend performance points, unlocked by levelling up, in those six different attributes to finally reach the perfect attributes combination for your driving style and racing conditions.

Fully Featured!
The game is now in its open beta status: after 10 different major patches it's now fully featured:

The OS X version of the game is currently in development and will be released in 2013.

Check out the game and play now in the Open Beta:
http://victorythegame.com
Popular Discussions View All (7)

SlyCooperFan1 Jun 29, 2014 @ 4:12am
They decided to switch from a free-to-play model to a retail model based on user feedback. They're not liars - they wanted to do F2P, but the people in the game's early access convinced them otherwise (or they decided it would be better as retail). And they got a lot more people interested in the game because of it.

As for Mac support, that looks like something that will be done further down the line. But don't quote me on that.

Victory: The Age of Racing has been Greenlit and is now listed in the Steam store. For the latest information, purchase options, and discussions for Victory: The Age of Racing, please see it on the Steam Store or in the Steam Community.
Visit Store Page
For more details Visit Community Hub
For latest discussions
If you really, really want to, you can continue to the Greenlight page. Information on this page may be out of date, since all the action has moved to the areas noted above.