Greenlight > Games > RetroCade SG's Workshop
Greenlight is being retired. For more information on how to submit games to steam, refer to this blog post.
This item has been removed from the community because it violates Steam Community & Content Guidelines. It is only visible to you. If you believe your item has been removed by mistake, please contact Steam Support.
This item is incompatible with Greenlight. Please see the instructions page for reasons why this item might not work within Greenlight.
Current visibility: Hidden
This item will only be visible to you, admins, and anyone marked as a creator.
Current visibility: Friends-only
This item will only be visible in searches to you, your friends, and admins.
Dusty Revenge
Description Discussions5 Announcements6 Comments339 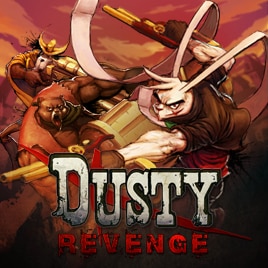 RetroCade SG
Offline
See all 62 collections (some may be hidden)

View Dusty Revenge in the store

Game Vortex (85%)[www.gamevortex.com]
“I had fun with Dusty Revenge and think fans of side scrolling beat ‘em ups or modern action games like Devil May Cry will as well.”

Generacion Pixel (Spanish Review) (8/10)[www.generacionpixel.com]
“A new opportunity for those who miss divide right and left, as they once did. The closest thing to a pure beat em up I’ve seen in a Indie game to date”

Mash Those Buttons (3.5/5)[mashthosebuttons.com]
“It’s got a huge move set, simple attacks to learn, beautiful stages, great enemy and level design, and a fun, unique soundtrack. It does a lot of work to keep the game interesting and varied for its players, something very few brawlers manage to pull off effectively.”

Calm Down Tom (4/5)[calmdowntom.com]
“The art style and old western feel of the story had me enjoying myself immensely. And the combat was nice and challenging, even on normal mode. All in all, a wonderful way to take out the stresses of a normal working day by exploding, shooting and beating the bejeebles out of anything that had the audacity to appear on-screen.”

8 Bit Horse(4/5)[8bithorse.blogspot.sg]
“Dusty Revenge is a solid brawler that keeps things interesting with its strong visual style, even though the characters themselves are weakened through poor writing. Still, the game offers a beautiful 2D world filled with colorful creatures in need of a stylish beat down, which should appeal to fans of single player melee action. Combat is generally satisfying, and your ever-growing combo repertoire gives you plenty of ways to deal with enemies, even if they prove to be a bit underpowered against the huge bosses.”

Read More
Description
Release date: July 2013
**It's finally here, well almost. Dusty Revenge: Co-Op Edition will be released on 17/02/2014
Destructoid
- 'All in all, it feels like a condensed 2D Devil May Cry 3, which is a great thing, and shows that PDDesignStudio really has a knack for designing technical action.'

'All along the way, the art is stunning, breaking the boundaries of an indie studio and venturing into major release territory.'

Jay Is Games
- 'The real juicy parts of the game take a little time to kick in (why isn't the bear with the massive gun there from the beginning?!), but once they do you'll realize this is much more than a simple sidescrolling punchfest.'

Blistered Thumbs
- 'The gameplay driving Dusty Revenge is compelling and engaging in a way that brings to mind some of the best examples of the side-scrolling beat ‘em up genre from the glory days of the 16-bit and arcade eras.'

Capsule Computers
- 'Dusty Revenge is a terrific action platformer game, that delivers everything a player could ask for, in terms of high 2D quality, art design, engaging storyline and replay value.'

Revenge will consume you, but redemption will push you to your breaking point.

Play as Dusty, a duel weapon wielding warrior ready to face loads of outlawed criminals, dangerous creatures and the ruthless evil villain that rules them all. Meet friends along the way with new weapons and alents, journey through lavishly drawn environments and work together to fulfill your unquenchable thirst for vengeance.

Intense story:
Consumed for revenge after the love of his life is killed, Dusty crosses paths with 2 unlikely allies who are each seeking out the same enemy for a different reason. As the three set out to destroy the responsible band of villains and anyone else that stands in their way, they unravel a scheme much bigger than their personal vendettas.

3 unique characters with their own weapons and mechanics:
Play as Dusty, a vicious multi gun wielding madman that boasts intense melee attacks. Players can also call upon two support characters, Rondel the artillery support who tramples enemies with a massive arsenal of weaponry and beastly rocket launchers, and McCoy the sharpshooter who takes down loads of enemies stealthily with his deadly accurate rifle.

9 Gorgeously drawn environments:
Venture through cavernous wastelands, western ghost towns and deadly jungle environments in your quest for blood. You never know what to expect from the each of the unique and precarious worlds!

Hordes of menacing villains:
A whole slew of enemies are out there ready to kill. From aggressive predatory vermin, vicious stalking felines, venomous mechanical snakes and giant armored gorillas, all run by the enigmatic leader Craven.

KeirosDragon May 1, 2015 @ 8:04am
I really hope you guys will fix the bugs. It looks great, but hearing about all of these bugs and glitches is making me hesitant in getting this game.

nik25 Jan 11, 2014 @ 8:32am
I've already bought the game before it comes on Steam, since I cannot wait for such a beautiful game and, yes, it deserves all my bucks definitely! Just a question that maybe already other Steam users asked you: "does gmg version will also provide a steam key when the game will be released for steam?" It would be a very nice way from you to reward people which believed in your game. Thanks

RetroCade SG  [author] Nov 6, 2013 @ 8:33pm
Hi Valannor. We are working on some new stuff for the Steam release. Bear with us while we frantically try to get things up as soon as we can. We'll post an announcement here once we are ready. Thanks!

dirk13 Oct 3, 2013 @ 12:42pm
Anthro bunnies? Wild west? Snipers? Seriously you guys, how did you manage to score so well in the me specific demographic :P ? That gets a fave from me, I will be sure to check back during the winter sale to see if the game is available ;) .

Dusty Revenge has been Greenlit and is now listed in the Steam store. For the latest information, purchase options, and discussions for Dusty Revenge, please see it on the Steam Store or in the Steam Community.
Visit Store Page
For more details Visit Community Hub
For latest discussions
If you really, really want to, you can continue to the Greenlight page. Information on this page may be out of date, since all the action has moved to the areas noted above.