Greenlight > Games > Ironhide Game Studio's Workshop
Greenlight is being retired. For more information on how to submit games to steam, refer to this blog post.
This item has been removed from the community because it violates Steam Community & Content Guidelines. It is only visible to you. If you believe your item has been removed by mistake, please contact Steam Support.
This item is incompatible with Greenlight. Please see the instructions page for reasons why this item might not work within Greenlight.
Current visibility: Hidden
This item will only be visible to you, admins, and anyone marked as a creator.
Current visibility: Friends-only
This item will only be visible in searches to you, your friends, and admins.
Kingdom Rush
Description Discussions71 Announcements11 Comments1840 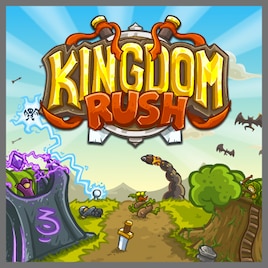 View Kingdom Rush in the store

What a great day for our Studio :)

Kingdom Rush is available NOW on Steam with 25% off!

Thank you all for your great support! We hope you enjoy it!

We have a lot more coming soon ;)

We are almost there!

2014 is coming and we have great news for all the Steam community!

Kingdom Rush will be available for sale on Steam on January 6th!

First of all we'd like to thank everyone that supported us along these years, specially the Steam community for being so patient and great. Bringing Kingdom Rush to Steam was a lot of work since we had to rebuild the whole game from scratch. So again thank you all for supporting us!

Now, what you've all been waiting for :)

Kingdom Rush for Steam will feature:

- Full screen High definition awesome illustrated cartoon art!
- The whole classic 12 stage core campaign: Defend the Kingdom from the forces of Vez'nan!
- The Winter Storm 2 stage mini-campaign.
- The Rise of the Bandits 2 stage mini-campaign.
- Bonus stages: The Ruins of Acaroth, The Rotten Forest and The Lair of Sarelgaz!
- Total of 17 fully illustrated stages to match your tactical skills!
- 8 Specialized towers with a total of 18 special tower abilities!
- Over 45 different enemies, from Goblins to Demons each with their own skills! (Beware of the mountain Trolls!)
- 7 Epic Boss Fights! Face the unstoppable Juggernaut, the unbeatable Troll Warlord and the humongous JT!
- 9 Legendary Heroes! (All unlocked with no additional cost!) Bring them to battle to face the hordes of evil!
- Hours of game play with over 50 achievements
- Extra game modes that will challenge your tactical skills to the limit.
- High definition awesome illustrated cartoon art!
- In-game encyclopedia with information from your towers and enemies.

- The Burning Torment 2 stage mini-campaign!
- The Fungal Forest Bonus stage!
- New Heroes: Oni the demonic samurai, Hacksaw the gnome tinkerer and Thor the demigod!
- The *NEW* Curse of Blackburn campaign! Will you be able to lift the curse that plagues the Blackburn state?

Thank you all! And have a Happy new Year!
For the King!

Read More
Description
Release date: Released: January 6th, 2014
Kingdom Rush has been released on Steam on January 6th, 2014!
We'd like to thank you all for the support and patience. You've been great every step of the way and that motivates us to keep working hard on our games.

Get ready for an epic journey to defend your kingdom against hordes of orcs, trolls, evil wizards and other nasty fiends using a vast arsenal of towers and spells at your command!

Fight on forests, mountains and wastelands, customizing your defensive strategy with different tower upgrades and specializations! Rain fire upon your enemies, summon reinforcements, command your troops, recruit elven warriors and face legendary monsters on a quest to save the Kingdom from the forces of darkness!

Originally posted by IGN (Rating 9) Editor's Choice:
Kingdom Rush is an instant classic and is guaranteed to turn up on 2012 “best of” lists. Anyone remotely interested in either tower defense or strategy should consider it a most-own. Gamers that think they don’t enjoy the genre should give Kingdom Rush a shot anyway – it might just win you over.

Originally posted by Kottke.org:
Ok, if you don't want to be playing this game for the next 20 hours straight, click away now. Kingdom Rush is my latest tower defense addiction and it may be the best one yet. That the music sounds a lot like the Game of Thones theme isn't hurting it either.

Originally posted by Jim Rossignol (Rock, Paper, Shotgun):
Yeah, so, at about 1pm a couple of people sent me a link to Kingdom Rush, a polished and artfully constructed browser-based tower defence game, and I’ve only just managed to tear away my mesmerised eyes from the screen to scribble something about it.

Originally posted by JayisGames.com:
Kingdom Rush can be filed in the thin folder marked "games that are pretty much perfect

Originally posted by PocketGamer (Gold Award - Score 9) :
This is one kingdom you'll be in no rush to escape from

Originally posted by 148Apps (4.5 Stars out of 5) Editor's Choice:
Kingdom Rush proves that the defense genre is still alive.

Originally posted by toucharcade.com (4.5 stars out of 5):
TD with a Touch of Excellence"

Originally posted by Slidetoplay.com (STP Score of 4 out of 4):
One of the most engaging TD games we've played...

• Epic defense battles that will hook you for hours!

• Command your soldiers and see them engage in hand to hand cartoon battles!

• Over 18 tower abilities! Have your Sorcerers summon earth elementals and polymorph your enemies!

• Over 30 different enemies, from Goblins to Demons each with their own skills! (Beware of the mountain Trolls!)

• Hours of gameplay with over 50 achievements

• Extra game modes that will challenge your tactical skills to the limit.

• In-game encyclopedia with information from your towers and enemies.

Air Feb 3, 2015 @ 7:08am
When I open this page I get a dialog that suggests to go the store page for this game. But when I click it, it redirects me to the main store page as if the game doesn't exist.

This can be very confusing for people who follow this game since greenlite. Because it looks like the game is either not released or blocked in my region or something.

Kingdom Rush has been Greenlit and is now listed in the Steam store. For the latest information, purchase options, and discussions for Kingdom Rush, please see it on the Steam Store or in the Steam Community.
Visit Store Page
For more details Visit Community Hub
For latest discussions
If you really, really want to, you can continue to the Greenlight page. Information on this page may be out of date, since all the action has moved to the areas noted above.