Greenlight > Games > Darknuke's Workshop
Greenlight is being retired. For more information on how to submit games to steam, refer to this blog post.
This item has been removed from the community because it violates Steam Community & Content Guidelines. It is only visible to you. If you believe your item has been removed by mistake, please contact Steam Support.
This item is incompatible with Greenlight. Please see the instructions page for reasons why this item might not work within Greenlight.
Current visibility: Hidden
This item will only be visible to you, admins, and anyone marked as a creator.
Current visibility: Friends-only
This item will only be visible in searches to you, your friends, and admins.
Guncraft
Description Discussions22 Announcements28 Comments2158 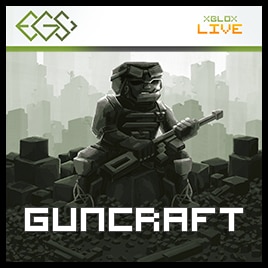 View Guncraft in the store

Remember that because this is such a short dev cycle project for us, we can't continue working on this game until it gets Greenlit. It doesn't make economical sense for us, since we may just end up sitting on the game for months before Steam greenlights us. We REALLY want to get Greenlit though, as this is a super fun project we are excited to make, but we need your help!

Go to our Steam Greenlight page, upvote us, and be sure to tell your favorite media outlets about our game. I will link a few of their tip lines below for easy access.

"I loved this game... it's straight out of a horror movie." - iTownGamePlay (YouTuber, 3 million subs)

"I... I love it. I have no words besides 'Give me'" - Alexander Paschall, Epic Staff

"It's pretty much first person Pac Man, but with the cute little ghosts replaced by roaring tractors of death - which is exactly as fun and as terrifying as it sounds!" - Alpha Beta Gamer

"This is a LionsGate movie just waiting to happen." - One Angry Gamer

"This reminds me of a handful of Stephen King novels blended into one game. Awesome! :D" - Rasen, Steam User

Everyone loves Death Tractor, so let's get it to the top!

Tip lines (these are just a few general places to go):

Are you ready for the most insane corn harvesting simulator you've ever experienced?! Prepare yourself, the DEATH TRACTORs are upon you!

VOTE FOR US ON GREENLIGHT

Death Tractor Website[www.deathtractor.com] - Includes a link to play the game!

You are a member of the Nomsanto family. The luck of these average, run of the mill GMO corn farmers goes sour when their loyal tractors get fed up with the modifications the family is making to their corn. They transform into horrendous, murderous death machines hellbent on wiping out the Nomsantos and returning the crops to their pristine state. However, the darkness has also changed the Nomsantos. They've been consumed by their capitalist greed and will stop at nothing to harvest as much profit as they can, even if that means murdering their other family members. How much corn will YOU harvest before your eventual death by tractor? Don't let your family, or the tractors, stop you from becoming the ultimate capitalist in DEATH TRACTOR!

This totally serious, 100% accurate to life corn harvesting simulation experience will get your adrenaline pumping and nerves excited. You'll never be able to farm for corn in the same light again!

Features include:
-4 player online/LAN multiplayer**
-Multiple levels
-Accurate corn harvesting physics and real-time growth patterns
-Tractors so frightening you will dream of nothing but them bearing down over your soul.
-Gameplay so easy to learn even your Grandma could do it. Until she has a heart attack from the TERRIFYING DEATH TRACTORS.

VOTE FOR US ON GREENLIGHT and we'll make this a full fledged game.

Guncraft in the press:

Note: Everyone will get Steam keys when we get to Steam.

Overview
Guncraft is a voxel-based first person shooter that boasts fully destructible environments, the ability to construct individual blocks or full structures in a single click, tons of killstreak rewards such as helicopters, jetpacks, bunker buster missiles, drones, and turrets, and a fully featured map creation tool that also features a voxel map importing function (using the Substrate C# engine). Play traditional modes like Deathmatch and CTF, or totally unique modes like Lava Survival and Siege Mode. On top of that, there are standalone servers, peer hosted servers, clan support and friends lists, in and out of game chat, leaderboards, and much, much more.

Steam Launch Features - These features will be available with our Steam Launch, once we are Greenlit.
So pick us Steam/Valve! You know you want to :D.

System Requirements
Our only system requirement is you need a DX10 card and a PC. We don't support Mac/Linux currently, but will be aiming to support them in the future.

Notes to commenters:
-Please... Before you decide to judge us solely on our looks and name (need I reference the saying "Don't judge a book by its cover"?), play the game. After, if you still feel ill-will towards the game, we invite your criticism. Yes, the game looks similar to Minecraft. Yes, our name has craft in it. No, we are not a rip-off, no, Mojang does not own the voxel genre, and no, modders could not easily make our game. Of the many, many hundreds of people who played our game at PAX, only 1 person walked away saying he did not enjoy the game. That person was not a FPS fan to begin with. We don't mind if you downvote us, that's your choice. However, if you are going to make claims against our game, please back them up with real insight. The game is free to play, so play it, then hate on it, if you still do hate it. I bet you won't.

-To our supporters. We truly, truly thank you. You keep us going and give us the motivation we need to ignore all the trolls and haters.

RIPanni Jul 27, 2015 @ 2:11pm
Minecraft will not be on Steam. Why? Well, simple, there's sales on Steam right? Notch dind't want people get the game with less cost than people who buy the game on the web page, and also, it's the same game. So what do you think, hats or something?

The Guy in Your Closet May 8, 2015 @ 4:20pm
People who want Minecraft in steam you can add it with a non-steam game, doesn't make servers for you though, wish it did...

Darknuke  [author] May 8, 2015 @ 10:49am
Don't forget to check out our Death Tractor Greenlight page! There's a free playable alpha too! http://steamcommunity.com/sharedfiles/filedetails/?id=399993239

The Guy in Your Closet May 7, 2015 @ 3:14pm
So I will assume he will say none of the bad things about it which you learn when you get it, and not give their own gameplay, figures, another Ace of Spades a game that looked good until I played it myself...

Guncraft has been Greenlit and is now listed in the Steam store. For the latest information, purchase options, and discussions for Guncraft, please see it on the Steam Store or in the Steam Community.
Visit Store Page
For more details Visit Community Hub
For latest discussions
If you really, really want to, you can continue to the Greenlight page. Information on this page may be out of date, since all the action has moved to the areas noted above.