Greenlight > Games > WolfGames's Workshop
Greenlight is being retired. For more information on how to submit games to steam, refer to this blog post.
This item has been removed from the community because it violates Steam Community & Content Guidelines. It is only visible to you. If you believe your item has been removed by mistake, please contact Steam Support.
This item is incompatible with Greenlight. Please see the instructions page for reasons why this item might not work within Greenlight.
Current visibility: Hidden
This item will only be visible to you, admins, and anyone marked as a creator.
Current visibility: Friends-only
This item will only be visible in searches to you, your friends, and admins.
Tanks Heroes
Description Discussions5 Announcements1 Comments803 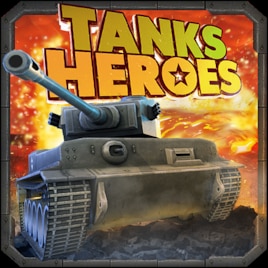 WolfGames
Offline
See all 56 collections (some may be hidden)
Recent Announcements View All (1)
Release on Facebook!!!
November 21, 2015 - WolfGames

Read More
Description
Release date: Early 2015
Tanks Heroes is a free multiplayer game with an incredibly beautiful graphics in cartoon style. An epic battle on the tanks of the Second World War wait for players. The tanks have very realistic physical models. Also, players can destroy not only the enemy tanks, but the objects of the landscape they are hiding behind. Compete with friends in three game modes - deathmatch, capturing the flag, capturing the base. Improve the most famous battle tanks of the Second World War. The game has 24 tanks, they are divided into two major lines - the Soviet Union and Germany, as well as premium range tanks - the U.S. and France. The game is created on the engine Unity3d and supports the following platforms: Windows, MacOS, Linux. Also, you can play right in the Web browser.

The main advantages:
1) Play for free
2) Tanks of the USA, USSR, France and Germany
3) Cartoon-style graphics
4) Beautiful locations with destructible objects
5) A realistic physical model of the tank
6) Improvable features of your tank
7) Compete with friends in deathmatch, capturing the flag, capturing the base.
Platform support: Windows, MacOS, Linux, Web browser - play directly in your browser.

Lt. Bella Belle McCalleghan Jan 23, 2017 @ 5:04am
Steam Cloud Please, this seems like "a lot unlockables" wouldn't want to lose them by playing on another PC.