Greenlight > Games > Lawrie's Workshop
Greenlight is being retired. For more information on how to submit games to steam, refer to this blog post.
This item has been removed from the community because it violates Steam Community & Content Guidelines. It is only visible to you. If you believe your item has been removed by mistake, please contact Steam Support.
This item is incompatible with Greenlight. Please see the instructions page for reasons why this item might not work within Greenlight.
Current visibility: Hidden
This item will only be visible to you, admins, and anyone marked as a creator.
Current visibility: Friends-only
This item will only be visible in searches to you, your friends, and admins.
Trash TV
Description Discussions2 Announcements3 Comments209 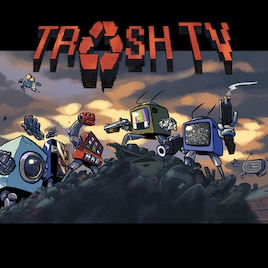 Lawrie
Offline
See all 55 collections (some may be hidden)
Recent Announcements View All (3)
State of the game
April 30, 2014 - Lawrie

Hey everyone, sorry I've been quite for so long. The game is still being produced and nearly ready for release, there have been some slight changes to the launch schedule and scope of the game at launch.

All single player levels have been produced and have gone through a ton of player feedback, I'm down to just two puzzle that need tweaking and testing. Overall it weighs in at 2 hours long of head scratching puzzles and nail biting chases.

Designing for co-op has tricky to say the least, while I'm now really good at playing two characters at once, overall I've only got half of the levels produced, tested and polished to a level I'm happy with. The new plan for co-op is to release it as a post launch free update.

I'm not personally covering the port of the Mac & Linux version, instead a company that worked for the Humble Indie Bundle will be doing the port, they estimate around 2 months to complete it. The good news is I get to focus on getting co-op ready at the same time as the game gets ported.

This is my lowest priority item and will be something I look at after I secure the co-op and ports.

Website has been redesigned and keep up to date with more regular news there. Also I don't think I've shouted loud enough about CO-OP MODE?!?!?!!

So here's a video cus the game is TV themed not shouting themed.

I might update the Steam demo with a co-op level too.

Read More
Description
Release date: 2013
"In Trash TV, the lead character quite literally is a television. That is the first bit I liked. It’s a sentient telly trapped in a nightmarish recycling centre, fighting its way out through puzzle strewn 2D levels, doing battle with vending machines and toasters." - Hookshot Inc

"Trash TV appears to be a platform game at first but is really more of a puzzler, although a puzzler in which the solution to everything is GUNS. There’s loads of GUNS and they enable the television that you are inexplicably controlling to escape from the garbage-haunted recycling plant that is an abattoir for such trash and detritus." - Rock Paper Shotgun

Originally posted by YOBA:
Is Linux support *guaranteed*, though? I'd probably buy this if that's the case, it looks very impressive and it's even won a prize! :o

A Linux version is guaranteed, a test port has been done to confirm it's possible!
Popular Discussions View All (2)

Kudos Oppenheimer Oct 30, 2013 @ 2:35pm
why does this even have to go through greenlight in the first place? I remember play the demo quite awhile ago, where this games was on steam along with few other indies because they were the winner of a competition. anyway, congrats!
< >