Greenlight > Games > Tikipod's Workshop
Greenlight is being retired. For more information on how to submit games to steam, refer to this blog post.
This item has been removed from the community because it violates Steam Community & Content Guidelines. It is only visible to you. If you believe your item has been removed by mistake, please contact Steam Support.
This item is incompatible with Greenlight. Please see the instructions page for reasons why this item might not work within Greenlight.
Current visibility: Hidden
This item will only be visible to you, admins, and anyone marked as a creator.
Current visibility: Friends-only
This item will only be visible in searches to you, your friends, and admins.
AQUA KITTY - Milk Mine Defender
Description Discussions1 Announcements9 Comments292 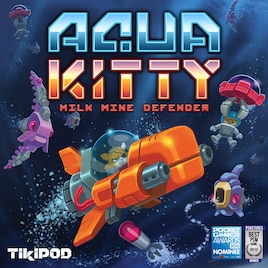 Tikipod
Offline
See all 40 collections (some may be hidden)

View AQUA KITTY - Milk Mine Defender in the store

Thanks so much to everyone for voting for and supporting the game, we were Greenlit in December 2013!

This was one of the first games to be put on Greenlight (before people had to pay a fee) and it has been a long and interesting journey to be greenlit.

We are aiming for a Steam release towards the end of January 2014 :)

The PC version of Aqua Kitty is due for release on both GOG and Desura on Monday 28th October!
At last you will be able to pump that milk and save those kitties from the comfort of your home PC.

Spread the word - THE MILK MUST FLOW!

Read More
Description
Release date: 28th October 2013
Do you like retro games / pixel art / cats / Amiga / PC Engine / Chiptunes / SHMUPS ? Of course you do!
Please help us Greenlight this game so the kitties can get their milk.

BACKSTORY
Due to a sudden shortage of milk, cats around the world are forced to seek out new sources to get their fix.
You and your team of milk mining kittens have overcome a fear of water to drill down under the ocean seabed and begin extracting vast reserves of what seems to be naturally forming full-fat milk.

Get ready for fast paced submarine action, defending the kittens from disruptive mechanical sea creatures.
THE MILK MUST FLOW!

CRITICAL RESPONSE
AquaKitty has been released on Xbox Indies and Sony PlayStation Vita (PSMobile) - and has reviewed really well scoring an average of 8+ out of 10 or better.

Originally posted by author:
The presentation and gameplay come together in near-perfect harmony, creating an experience that's as challenging as it is enjoyable.

Originally posted by author:
Aqua Kitty should be occupying space on everyone's Vita. There's no reason not to have it.

Originally posted by author:
Aqua Kitty: Milk Mine Defender is a fantastic launch title for the PlayStation Mobile platform.

SOUNDTRACK
Like the soundtrack? You can get it online now,direct from the musician. It can be found at the following stores:

The game is being developed by a 2 person team of experienced developers:
Art by Dugan (the artist for games such as `Stealth Inc`/Stealth Bast**d Deluxe, `Gravity Crash PS3` and `Rock Boshers`).
Code by Gabor.

Here you can read more about the evolution of the game on Tigsource:
{LINK REMOVED}http://store.steampowered.com
< >
292 Comments

Tikipod  [author] Feb 3, 2014 @ 2:51pm
Hey all - thanks again for your support - the game is now available on steam to BUY - with online leaderboards, achievements, trading cards and new weapons and arcade mode!

zelgaris Jan 17, 2014 @ 3:28am
Hey, Tikipod, I may have an interesting offer for you, so confirm my invitation and or send me an email to zlg@isthereanydeal.com ;)

Tikipod  [author] Jan 16, 2014 @ 3:10pm
quick update - release is now penned in for 3rd Feb! We have added more to the game like steam leaderboards, achievements, extra weapons and a super DOOPA new arcade mode that plays like a mashup of gradius and defender :P

Ѕнιηовι Dec 30, 2013 @ 8:06am
I'm sure it could be an attainable design goal, bearing in mind what I said, it really would bump your sweet game up in sales when released on Steam :D, this has all the style and panache (and gameplay.. AND CATS) to be one of those little hits on Steam when it launches; hit Steam people up for some support integrating it into Steamworks :D
< >

AQUA KITTY - Milk Mine Defender has been Greenlit and is now listed in the Steam store. For the latest information, purchase options, and discussions for AQUA KITTY - Milk Mine Defender, please see it on the Steam Store or in the Steam Community.
Visit Store Page
For more details Visit Community Hub
For latest discussions
If you really, really want to, you can continue to the Greenlight page. Information on this page may be out of date, since all the action has moved to the areas noted above.