Greenlight > Games > Snowed In Studios's Workshop
Greenlight is being retired. For more information on how to submit games to steam, refer to this blog post.
This item has been removed from the community because it violates Steam Community & Content Guidelines. It is only visible to you. If you believe your item has been removed by mistake, please contact Steam Support.
This item is incompatible with Greenlight. Please see the instructions page for reasons why this item might not work within Greenlight.
Current visibility: Hidden
This item will only be visible to you, admins, and anyone marked as a creator.
Current visibility: Friends-only
This item will only be visible in searches to you, your friends, and admins.
Windforge
Description Discussions2 Announcements21 Comments616 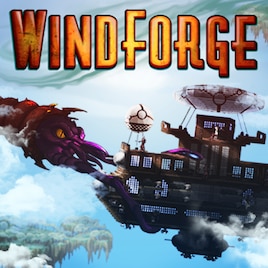 View Windforge in the store

Read More
Experiments In Windforge: Passive Aggressive Propellers
February 12, 2014 - Snowed In Studios
Dev Diary by Evan Hahn
With my last post I experimented with using propellers defensively. I was able to setup up propellers on the ground that prevented enemy artillery shells from being able to hit me.

For my next test I wanted to figure out how practical it would be to do this on ships. This would be great since you are much more likely to encounter enemy ships while you are also flying a ship. The challenging thing about this though, is that you actually need them for flying too. This means that every time you change direction on your ship, your propellers will suck or blow in the opposite direction that you are accelerating. To make things worse, if you the propellers are turning in the wrong direction, they will actually suck the shells into your ship, instead of defending you.

To test things out, I made a giant wall of propellers on the side of my ship. Then I spawned an enemy ship to see what I can do. After playing around a little bit I was able to figure out a technique that would allow me to push away the enemies artillery shells. Not only that, I was also able to deflect the artillery shells back into their own ship quite often. Check out a screenshot of this in action below.

Here's a quick action video of this on vine.[vine.co]

Like I was saying, this whole thing requires a bit of technique from the player. Every time you want to deflect an artillery shell, you must be moving away from it. This isn’t so bad since you reflexively try to move away when you want to get away from danger. I just had to be really conscious of the fact that I didn’t try to get closer when there were enemy artillery shells around.

Also, I ran into a bunch of cases where the enemy shells were getting sucked into my top propellers. This was happening because they constantly need to be sucking downwards in order to keep the ship in the air. I haven’t really experimented with this yet, but you might be able to use this fact to your advantage in combat if you are having trouble hitting your target. All you need to do is aim for the region where air will be sucked in and, you will likely hit the ship.

Is this technique practical? Maybe? If your aim is to attack a ship, it will be a lot faster and easier to just directly shoot it. That said, if you are out of ammo, want to conserve ammo, have broken turrets, or just looking for a challenge, this technique might be for you. I’m just happy that you can do it :)

I feel like there are still a lot of cool things you can do with propellers. If you find other cool uses for them, let me know!

Be sure to stay tuned to Snowed In Studios via our blog and social media for more news!
Official Website[snowedin.ca] | Facebook[www.facebook.com] | Twitter | YouTube | Tumblr[snowedinstudios.tumblr.com] | Instagram[instagram.com]
Read More
Description
Release date: March 11th 2014
Windforge is a 2D building block RPG that seamlessly combines gameplay like Contra with the freedom and building of Minecraft. Build airships and explore hostile skies in an ever changing Steampunk world. Everything you see can be created or destroyed, yielding an RPG without barriers that rewards creative problem solving and improvisation.

Features
Lastly, here are some highlights of the game:
Freedom & Creativity
Explore, create and destroy anything!
A Dynamic Procedural World
Steampunk Airships

Join the community! Check out the Windforge Forum[forum.snowedin.ca]!

Join the Windforge Steam Community group. We also have T-Shirts and Prints for sale![society6.com]

We would love to hear your feedback!
Popular Discussions View All (2)

Snowed In Studios  [author] Mar 11, 2014 @ 2:18pm
@Patrik (AKA Slippery Bastard) - I would love to do multiplayer some day. Windforge would be awesome with multiplayer. It will be a significant undertaking though, so we will have to wait to see if we can get the time and money.

Patrik (AKA The Crawdad) Mar 9, 2014 @ 4:41pm
I'm really excited for this, but I'm not sure if there will be multiplayer. Will multiplayer be implemented at launch, after launch, or ever?

Snowed In Studios  [author] Mar 4, 2014 @ 7:41am
@nedet In exactly one week! It will be available on Steam, Humble Store, Good Ol Games & Desura! Stay tuned to our facebook page for info!

Windforge has been Greenlit and is now listed in the Steam store. For the latest information, purchase options, and discussions for Windforge, please see it on the Steam Store or in the Steam Community.
Visit Store Page
For more details Visit Community Hub
For latest discussions
If you really, really want to, you can continue to the Greenlight page. Information on this page may be out of date, since all the action has moved to the areas noted above.