Greenlight > Games > false3d's Workshop
Greenlight is being retired. For more information on how to submit games to steam, refer to this blog post.
This item has been removed from the community because it violates Steam Community & Content Guidelines. It is only visible to you. If you believe your item has been removed by mistake, please contact Steam Support.
This item is incompatible with Greenlight. Please see the instructions page for reasons why this item might not work within Greenlight.
Current visibility: Hidden
This item will only be visible to you, admins, and anyone marked as a creator.
Current visibility: Friends-only
This item will only be visible in searches to you, your friends, and admins.
Exoplanet: First Contact
Description Discussions4 Announcements26 Comments870 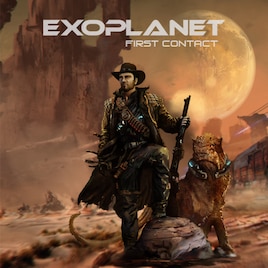 bijou
Last Online 2 hrs, 56 mins ago
See all 130 collections (some may be hidden)
Kickstarter WE ARE ALREADY 100% FUNDED BUT WE NEED YOUR HELP TO REACH THE SECOND STRETCH GOAL! 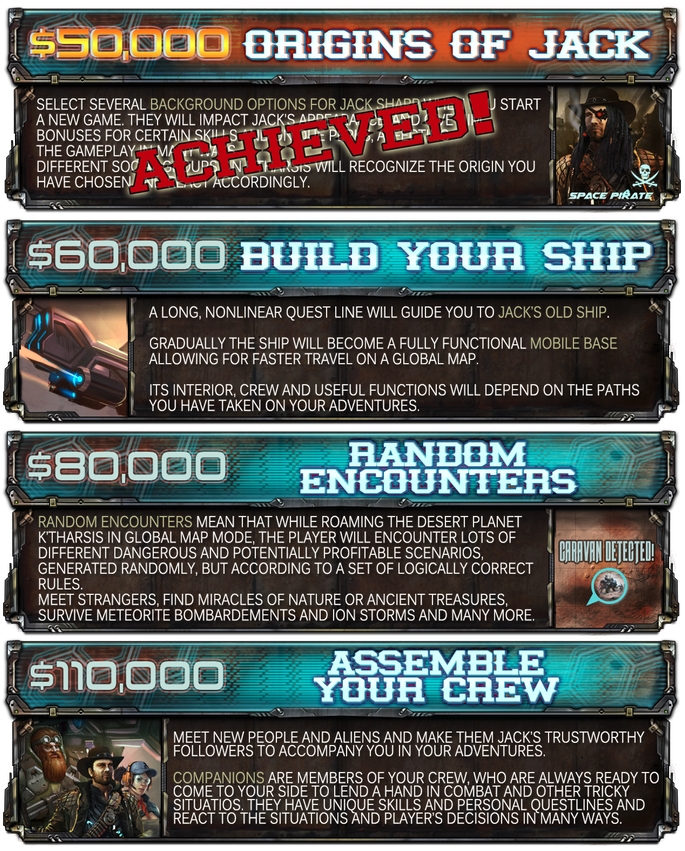 Exoplanet: First Contact is a single-player, story driven action RPG set in a space western universe, where real and fictional technologies meet the cruel and unforgiving, yet romantic reality of the Wild West exploration and development. You are playing as Jack Sharp, a daring adventurer, stranded against his will on a dangerous, wild planet known as K'Tharsis. The former mining outpost where he’s taken up residence is now gradually becoming a “ghost colony” as the Antigravium Crystal Rush is over and the inhabitants of this desert world struggle for survival. In our game we transpose the outstanding archetypes of the western genre characters and the ever-existing problems of the human race to the steadily moving Space Frontier, to a resource colony situated far from the beaten paths on the wild, untamed planet K’tharsis. Torn apart by conflict between the mining corporations and the free prospectors, the colonists, and natives, this is a place where actions speak louder than words, a place that contains eminent danger for our protagonist, who has never before set foot on these hot sands. Despite the fact, that you can ride a hoverbike and have cybernetic augmentations, you still need to keep your trustworthy revolver well cleared and greased, just in case you want to leave the town’s walls. The local humans often see kindness as a weakness and aborigines won't be impressed by bubble gum and glass beads.

The Western genre has not only granted us a healthy dose of good old “shoot ‘em up” moments but also a rich set of charismatic characters to meet. Many of them are the spiritual successors of cult personalities from Western movies who always have a strong and understandable motives, as well as a few skeletons in the closet. On K’Tharsis, the vast desert in-between the so-called fires of civilization is ruled by violence. Various outcasts, desert raiders, runaway slaves and even the original natives are always thirsty for the blood of other inhabitants of this cursed planet. They fight the “normal” people and aliens, who seek safety behind the walls of free settlements and last corporative enclaves. These are the years of decay for human colonial regime on K'Tharsis. A single man in the wrong place, at the wrong time becomes the smallest stone that triggers an avalanche of events. The only thing guaranteed is that not every inhabitant of the planet will survive.

We also decided to invent a “new gold”, a precious mineral which is driving the colonists mad, spilling some fresh oil onto the flames of the eternal conflict in human civilization. This “new gold” is called Antigravium, and it became a symbol and the fuel that feeds the ambitions of the daring colonists, who, like their ancestors, are mesmerized by the visions of enormous wealth to be found literally under their feet on those wild Frontier planets. Unable to resist the call of this new Gold Rush, they ventured to the wilderness to spend their life in an unrelenting environment in hopes of laying foundations for the generations to come — or to die in vain. The “Antigravium Crystal Rush” broke out on K’Tharsis decades ago, but the local powers that be are still fighting for control over the remaining deposits of this treasured mineral. Wandering in this strange world full of opportunities and deadly traps, you must act carefully, always watching your back and keeping an eye on your numerous enemies, trusting only a select few friends.

Learn more about Exoplanet at our website: ALERSTEAM [alersteam.com]
< >
870 Comments

мιηιмαl. Dec 8, 2016 @ 3:56am
@bijou, YOUR LINK DELETED! :( try again with space after points! Im add to my wishlist 2months ago! But thanks the informations! Tomorrow i can try for free?

bijou  [author] Nov 25, 2016 @ 3:59pm
Steam Early Access is coming in a few weeks probably. Soon we will reveal our store page for Exoplanet.

Exoplanet: First Contact has been Greenlit and is now listed in the Steam store. For the latest information, purchase options, and discussions for Exoplanet: First Contact, please see it on the Steam Store or in the Steam Community.
Visit Store Page
For more details Visit Community Hub
For latest discussions
If you really, really want to, you can continue to the Greenlight page. Information on this page may be out of date, since all the action has moved to the areas noted above.