Greenlight > Games > BeautiFunGames's Workshop
Greenlight is being retired. For more information on how to submit games to steam, refer to this blog post.
This item has been removed from the community because it violates Steam Community & Content Guidelines. It is only visible to you. If you believe your item has been removed by mistake, please contact Steam Support.
This item is incompatible with Greenlight. Please see the instructions page for reasons why this item might not work within Greenlight.
Current visibility: Hidden
This item will only be visible to you, admins, and anyone marked as a creator.
Current visibility: Friends-only
This item will only be visible in searches to you, your friends, and admins.
Nihilumbra
Description Discussions2 Announcements13 Comments537

JesusFabre
Offline
See all 77 collections (some may be hidden)

View Nihilumbra in the store

Yes! Steam! we are there, finally! hard to believe but in the end all the work we started doing a year ago, today has come to fruition! So here is what you, dear long-time supporter, and you, welcomed newcomer to our site (maybe thanks to the divine power of Steam), can find when entering the Nihilumbra Universe!
Nihilumbra is a dark tale that takes shape as a solid puzzle platformer where you play as Born, a weird but also charming being that one day separated and grew up from The Void. The Void seems to hate your hunger for independence, so he goes after you, vanishing everything he finds on its way only to try to absorb you back. Your only weapon to make your way through the end of the adventure are the colors you find along the stages of the game, each one has a power to modify the scenario. The use of colors, along with the melancholic loneliness of the game game, sets the perfect mood to present some really challenging situations to the players. Also, is impossible to forget to mention the hand-drawn graphics and the moody and melodic music composed by the brilliant Álvaro Lafuente.


The human story behind.
As it happens in the first stage of the game itself, Nihilumbra for its own was a leap of faith, in a gaming universe oversaturated with words like "social", "casual", "free to play" or "in-app purchase", a few students wanted to make a game in the old fashion, something that you pay for once and enjoy for your whole existence. That's Nihilumbra, a game about existentialism, full of challenges and meaning. Released for iOS platforms in early 2012, the initial goal was to raise the quality bar to try to stand out from the average mobile titles in the always overcrowded AppStore. A year and a half after, we can say we achieved it, the great critic reception (remarking iTunes’ Best of 2012: Hidden Gem award) fueled us to port our game to other platforms, like PC, Linux and Mac, and in the future to platforms like Wii U and Android.

And this is a golden chance to re-introduce you our dear Nihilumbra's trailer:

You can also get Nihilumbra on the Humble Store: http://www.nihilumbra.com/

Who are Beautifun Games? 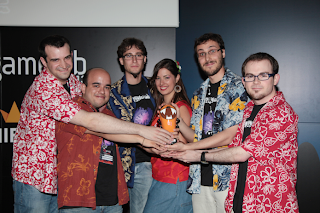 We started out in March 2011 as a team of a few young graduate students from Barcelona who wanted to create something of their own, at the beginning there was no money there, only a passionated group of around 15 students who met once a week to try to shape their dreams into something truly enjoyable. As anyone may expect, in a few months that group of people became smaller and smaller, only the ones who really wanted (and could afford) to be part of that labour of passion remained. Then what it was going to be an amateur project turned into a professional work when Aniol, one of the four remaining members, purposed to invest his own savings in funding a real game company. Then BeautiFun Games was born and a year later Nihilumbra became its first child. Now you can understand why today is a great day for us, we see how our efforts are starting to pay off, and this way are opening the door to new projects, new leaps of faith.

Discover the beautiful world of Nihilumbra and join Born on his adventure to find himself whilst trying to escape from his inevitable curse.

Born was created from the absolute nothingness: The Void. But somehow he separates himself from the black emptiness and appears in the world. This is where his long odyssey begins, in which he will learn how to use the colors around him to gain powerful abilities and transform the world.

However, his experiences come at a high price. The Void must be one. It seeks to reclaim him and will never stop chasing him, destroying everything in its path along the way.
To survive, Born will have to condemn the earth he walks to it's inevitable obliteration by The Void...

- The ability to change ground physics using five different colors.
- Use five worlds as your canvas and transform them at your will.
- Original soundtrack composed by Álvaro Lafuente.
- More than 10 hours of gameplay.

FEATURES FOR THE PC VERSION:


Thanks from all the BeautiFun Games team for all the positive feedback.
You are awesome!

JesusFabre  [author] Oct 25, 2013 @ 2:40pm
Yes! Steam! we are there, finally! hard to believe but in the end all the work we started doing a year ago, today has come to fruition! So here is what you, dear long-time supporter, and you, welcomed newcomer to our site (maybe thanks to the divine power of Steam), can find when entering the Nihilumbra Universe!
http://store.steampowered.com/app/252670

Nihilumbra has been Greenlit and is now listed in the Steam store. For the latest information, purchase options, and discussions for Nihilumbra, please see it on the Steam Store or in the Steam Community.
Visit Store Page
For more details Visit Community Hub
For latest discussions
If you really, really want to, you can continue to the Greenlight page. Information on this page may be out of date, since all the action has moved to the areas noted above.