Greenlight > Games > Styg's Workshop
Greenlight is being retired. For more information on how to submit games to steam, refer to this blog post.
This item has been removed from the community because it violates Steam Community & Content Guidelines. It is only visible to you. If you believe your item has been removed by mistake, please contact Steam Support.
This item is incompatible with Greenlight. Please see the instructions page for reasons why this item might not work within Greenlight.
Current visibility: Hidden
This item will only be visible to you, admins, and anyone marked as a creator.
Current visibility: Friends-only
This item will only be visible in searches to you, your friends, and admins.
Underrail
Description Discussions10 Announcements20 Comments894 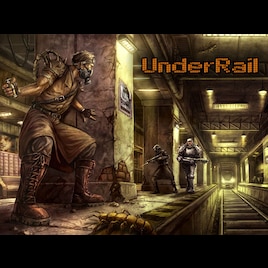 Styg
Offline
See all 134 collections (some may be hidden)

View Underrail in the store

If you're an owner already you might want to head over to the discussion forums and give new players some tips. And if not, this would be good time to pick the game up. ;)

If you purchased the game in the past through Desura, GamersGate or Groupees here is how you redeem your Steam key:

DESURA:
The Steam-keys are now avaible on Desura:
0. Make sure you purchased the game from Desura. The Desura key you got from Groupees will not provide you with a Steam key.
1. After your Login into Desura, go to your collection[www.desura.com]
2. Search for Underrail and click Keys (or follow this link[www.desura.com])

In the last two weeks I've been working on Steam integration, primarily implementing the achievements.

There will be 50 of them initially, but I plan to keep on adding more bit by bit with each future update. A lot of them are your usual "do something X times", but there are a number of more interesting ones and I'll also be focusing on those more in the future. Kinda wanted to get the basics done first. For those of you who are interested in Steam trading cards, I do hope to implement those at a later stage, once the character and creatures portraits are done and I have more graphical assets to work with as those require a lot.

In other news, I've also fixed a couple of bugs (along with some spelling errors, per usual):

Next I need to take care of some technical stuff and finish Steam release preparations. I'll let you guys know when it's coming out as soon as I have a confirmed date.
Read More
Description
Release date: Second half of 2013
Underrail is an old school turn-based isometric indie role playing game that focuses on exploration and combat. It's inspired by western RPG classics such as Fallout, Arcanum, Neverwinter Nights and System Shock 2.

The game is set in a distant future, when the life on the Earth’s surface has long since been made impossible and the remnants of humanity now dwell in the Underrail, a vast system of metro station-states that, it seems, are the last bastions of a fading race.
The player takes control of one of the denizens of such a station-state whose life is about to become all that much more interesting and dangerous, as our protagonist is caught amidst the conflicting factions of the Underrail as they secretly but violently struggle for the Humanity’s last gem of hope.

Underrail has been Greenlit and is now listed in the Steam store. For the latest information, purchase options, and discussions for Underrail, please see it on the Steam Store or in the Steam Community.
Visit Store Page
For more details Visit Community Hub
For latest discussions
If you really, really want to, you can continue to the Greenlight page. Information on this page may be out of date, since all the action has moved to the areas noted above.