Greenlight > Games > Kjow Project's Workshop
Greenlight is being retired. For more information on how to submit games to steam, refer to this blog post.
This item has been removed from the community because it violates Steam Community & Content Guidelines. It is only visible to you. If you believe your item has been removed by mistake, please contact Steam Support.
This item is incompatible with Greenlight. Please see the instructions page for reasons why this item might not work within Greenlight.
Current visibility: Hidden
This item will only be visible to you, admins, and anyone marked as a creator.
Current visibility: Friends-only
This item will only be visible in searches to you, your friends, and admins.
Slot Cars - The Video Game
Description Discussions1 Announcements4 Comments246 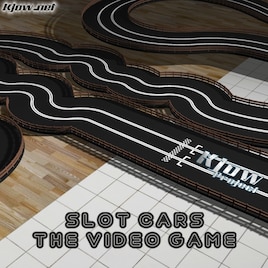 "Slot Cars - The Video Game" has been Greenlit!

Hi guys!
Thank you to vote me! Not bad rate for the Top100 at now, but long way to be on Steam yet.

Unfortunately I had to suspend the development for a while, but I'm going back to complete this game.
Of course, before Steam, SCTVG will be available on other online stores.

Someone asked about controls: there are three keys to press; each key give you more speed. You can customize keys in options.
I would implement an analogic control, on mobile (Android and maybe iOS) via wifi and maybe, later, joypad support... but I need funds before.

Thank you again for voting this game, let the hope alive :)

PS remember that graphics of most of these screenshots and physics of demo are obsolete, actual build is much better to show and play.
In next weeks I will refresh every resource (screenshots, videos, demo and hopefully the full game ;) ).

REMEMBER: DEMO is available on official site. This is only demonstrative and it doesn’t represent final quality.
This version has limited functions compared to the final release and it is obsolete with old graphics/physics.

RagunCagun Jul 30, 2014 @ 4:24am
I like it, But maybe you could had a first person/following-from-behind-the-car third person? That would certaintly make me buy it.