Greenlight > Games > ShadowShifters's Workshop
Greenlight is being retired. For more information on how to submit games to steam, refer to this blog post.
This item has been removed from the community because it violates Steam Community & Content Guidelines. It is only visible to you. If you believe your item has been removed by mistake, please contact Steam Support.
This item is incompatible with Greenlight. Please see the instructions page for reasons why this item might not work within Greenlight.
Current visibility: Hidden
This item will only be visible to you, admins, and anyone marked as a creator.
Current visibility: Friends-only
This item will only be visible in searches to you, your friends, and admins.
Huntsman:The Orphanage
Description Discussions13 Announcements57 Comments2242 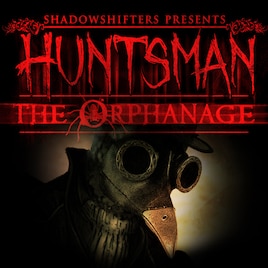 ShadowShifters
Offline
See all 164 collections (some may be hidden)

View Huntsman:The Orphanage in the store

All the characters' stories, and the game's overture and songs, can finally be enjoyed outside of the game! Now the Huntsman can travel with you, whispering in your ear... where-ever you go...

Read More
Description
Release date: September 2013
THIS COULD BE THE FUTURE OF GAMING... A HYBRID OF HORROR-SURVIVAL AND CREEPYPASTA
This is an indie horror-survival game that replaces blood and violence with the subtlety of the fear that springs from your own imagination. Only through empathy for the plight of the orphans, and through pro-actively responding to their pleas, can you successfully complete the game. Blend all this with creepypasta-style dialogue and stir your imagination!

AS DARKNESS CONCEALS, SO LIGHT REVEALS – AND YOU MAY NOT LIKE WHAT YOU SEE...
The human fear of the dark is innate within us all; we may conquer it to a certain degree, but never fully suppress the chill of unease it harbours. For millennia our ancestors have gathered around the flickering light of the fire, seeking succour from its warmth and the wisdom of insight offered by the multitude of visions of wild game, predators, allies, enemies and creatures with no name at all writhing within the shapes cast by the dancing flames; light has always been a portal to other dimensions, beyond these earthly realms.
But place your faith in the light at your own peril, for just as darkness conceals, so light reveals - and in the portal between those two worlds, lives... The Huntsman.

The Huntsman thrives in the darkness, effortlessly weaving and unravelling space and time through all the centuries, seeking the lost and the lonely, the orphaned and the bereft. Some say he came to be in our particular thread of reality in the 14th century, attracted by the misery wrought by the Black Plague of Europe and clad in the black-leather guise of a Plague Doctor... come face to face with him in the here and now at your own risk – he hunts within the half-light, the world his unsuspecting prey blindly see as safe, only to secret his victims within the realm he most adores – the blackness.

Grimhaven Orphanage, Illinois, USA... the place where you come face to face with your past, your fears, your future - and the legendary Huntsman! Here one fateful night, way back on June 17th 1898, a dozen children disappeared... seemingly without a trace. Yet, traces do remain.

Back in the present day, here you are - visiting the crumbling overgrown edifice of that same orphanage, urged on by your curiosity and the rising swell of cries for hard evidence that The Huntsman may actually exist. Even as you explore the abandoned buildings and investigate the truth behind the tragedy, you risk becoming a victim of The Huntsman yourself - he still stalks the paths and hallways, and his embrace is inescapable.

Clamber over the overgrown hedges one moonlit night, tentatively step inside through the broken front doors, flick on your phone’s torch app so you can see where you're going. Shine it around the aging brick walls... the orphanage has obviously been deserted for many years, yet, something in the air is changing – there is a stirring, you can feel it.

Exploring the crumbling rooms, casting your light over the disused pots and pans in the scullery, looking out from the dirty windows over the back yards, the rambling old memorial hedge maze and its 'hanging tree', the old chapel. In the murky back corner of what must have been the music room rests an old German piano, dusty, crooked, neglected for so long. Listen - can you hear those distant yet clear notes of music - it's altogether complex, plaintive, haunting - an eerie expression of the grief and misery of a young orphan lost in time?

Climb the rickety stairs to the rows of cots lining the low-ceiling dormitories, a pair of iron scissors dangling above each little bed to guard the infants from the changling-maker fairies... a child's toy rolls across the floor to your feet and as you go to pick it up, your phone crackles to life - an image is trying to form on the screen... someone is trying to communicate... there are cries for help through the white noise - is that a child's face... from another time, but perhaps, the very same place?

Could there be a deeper set of motivations, personal discoveries, twists and turns to this journey through the dank, cramped brick-walled rooms of the abandoned Grimhaven Orphanage? Will your discoveries reveal more than you bargained for, as the layers of time and space are peeled back one by one? Are there unknown links between you and the faint sounds of those lost children’s voices, their half-seen faces straining and struggling to communicate to you through the electronically-sensitive medium of your own phone, and can you save them all from another 100 years of darkness and solitude?

It seems that parallel to your search for the truth, you must also save the soul of your own ancestor, the missing orphan Charley - or you may cease to exist yourself. Twists in time and tears in the fabric of space provide glimpses of the terrifying events of that night, and as you piece together the stories behind the disappearances and the rumours of The Huntsman, you learn of shocking connections to the haunted young Charley.

Follow the clues, do as Charley asks you, find him, bring him back, or cease to exist yourself!

About Shadowshifters:
We're a bootstrapped indie start-up in the rainforest mountains of the Australian Hinterland.

{LINK REMOVED}KOTAKU.COM:
"Ooo... creepy! ...Rose, who begs you to help her find her ribbon... My guess? She's gonna eat your face. Don't find her that ribbon."

DAJAY:
"...may become something along the lines of Resident Evil 4 for the new generation of gamers, and truly innovate what is becoming a dying genre..."

JAYISGAMES:
"The new design looks fan-freakin'-tastic, and to see the developers rally to the creative challenge instead of rolling over is really inspiring"

{LINK REMOVED}GAMERSYNDROME.COM
"...has a lot more substance than anything else I’ve seen... the plot about saving a young boy’s spirit is rather brilliant... branching out into the domain of true story telling."

{LINK REMOVED}UNREALITYMAG.COM:
"It’s hard not to be impressed..."

COSYGAMING:
"...features a much greater emphasis on plot and back story than any of the games I’ve mentioned... I think this could be a dark horse..."

CASUALGAMEPLAY:
"...looks like it's going to be a deliciously spooky adventure. Keep your eyes peeled, and the lights on."
< >
2,242 Comments

AergisGeist Jan 24, 2016 @ 3:09pm
Thanks! When you go onto this page and it asks to take you to it's store page, it takes you to a none exsitant version or something.

Protag May 5, 2014 @ 12:38pm
so basically...the huntsman kidnapped and killed all the young orphans and HE is the one behind there disapearences?

Huntsman:The Orphanage has been Greenlit and is now listed in the Steam store. For the latest information, purchase options, and discussions for Huntsman:The Orphanage, please see it on the Steam Store or in the Steam Community.
Visit Store Page
For more details Visit Community Hub
For latest discussions
If you really, really want to, you can continue to the Greenlight page. Information on this page may be out of date, since all the action has moved to the areas noted above.