Greenlight > Games > 3dRobbo's Workshop
Greenlight is being retired. For more information on how to submit games to steam, refer to this blog post.
This item has been removed from the community because it violates Steam Community & Content Guidelines. It is only visible to you. If you believe your item has been removed by mistake, please contact Steam Support.
This item is incompatible with Greenlight. Please see the instructions page for reasons why this item might not work within Greenlight.
Current visibility: Hidden
This item will only be visible to you, admins, and anyone marked as a creator.
Current visibility: Friends-only
This item will only be visible in searches to you, your friends, and admins.
Recruits
Description Discussions6 Announcements10 Comments809 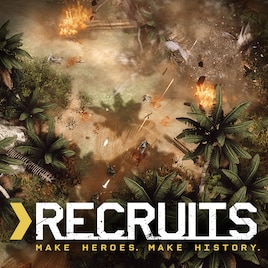 3dRobbo
Offline
See all 129 collections (some may be hidden)

View Recruits in the store

Recruits is now for sale on Steam's Early Access. Head over to the Steam Store and grab a copy today.

Let us know any feedback you have or any comments or suggestions as we love to hear them.

If you have already picked up the Alpha head to the place where you got it from and recieve your Steam key.

A Big Thank you to everyone who supports us, we could not have gotten this far with out you all and we hope you enjoy playing the game.

Join in at our new forums using Discourse
[forums.recruitsgame.com]
As we move closer and closer to our release on Steam's Early Access, we are also setting up other foundations that we feel will help us better the game as best as we can.

We came across a new type of forum, http://discourse.org, who are offering a new type of discussion platform that we are very proud to be a apart of! Its simple, easy to use and easy to contribute, so go ahead, share your thoughts and comments all the developers of Recruits are here to chat to and answer any questions.

We will have more updates soon, we have been working on so much back end stuff for Recruits and we are getting closer and closer to a release on Steam for everybody. Bare with us and have faith! The game is on the way!

- Follow us
Read More
Description
Release date: Early 2014
Make Heroes. Make History.
Recruits is a squad based top down shooter. Inspired by games like Cannon Fodder, Alien Swarm and Jagged Alliance Recruits puts players on the front lines of the battlefield to accomplish your missions through any means necessary. Fast paced and packed with explosions, Recruits offers a wide variety of features that allow you, and your friends to take command of the action and lead your men to victory.

Support the development of Recruits by pre-ordering the game for only $4.95.
When you pre-order Recruits you will receive:
Game Info:

For the latest updates:
http://www.indiedb.com/games/recruits

As players progress through the game they will gain ranks and respect amongst their fellow soldiers, giving them bonus abilities, unlocked items and perks to better defeat their enemies. The main aim for the player is to complete their missions and gain as many kill points as possible. The higher the rank of the player, the more efficient soldier they are, giving the team a better chance of surviving the missions and ultimately the war.

Originally posted by GreenlitGaming:
...their use of the Unreal engine, explosions, body dismemberment and other special effects look fantastic.
{LINK REMOVED}http://greenlitgaming.com/recruits-preview/

Hebrew Hammer Aug 30, 2012 @ 1:57pm
pummped for this shit, my friend jasson has been working tirelessly on this game and its going to be ill so get the word out to all your friends to up vote it to be made available

Recruits has been Greenlit and is now listed in the Steam store. For the latest information, purchase options, and discussions for Recruits, please see it on the Steam Store or in the Steam Community.
Visit Store Page
For more details Visit Community Hub
For latest discussions
If you really, really want to, you can continue to the Greenlight page. Information on this page may be out of date, since all the action has moved to the areas noted above.