Greenlight > Games > Hanako's Workshop
Greenlight is being retired. For more information on how to submit games to steam, refer to this blog post.
This item has been removed from the community because it violates Steam Community & Content Guidelines. It is only visible to you. If you believe your item has been removed by mistake, please contact Steam Support.
This item is incompatible with Greenlight. Please see the instructions page for reasons why this item might not work within Greenlight.
Current visibility: Hidden
This item will only be visible to you, admins, and anyone marked as a creator.
Current visibility: Friends-only
This item will only be visible in searches to you, your friends, and admins.
Science Girls
Description Discussions1 Announcements4 Comments514 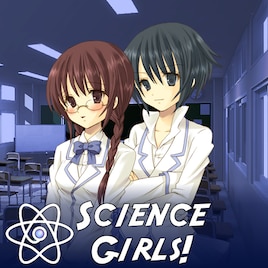 Hanako
Offline
See all 80 collections (some may be hidden)

View Science Girls in the store

You can now purchase this game from the steam store, with a 25% off launch discount. Hope you enjoy!

Sorry for the delay! We finally have all the new art in, and a bunch of gameplay polish upgrades as well. We are currently looking for people who already own the game who would like beta keys to play the new version on Steam and help us hunt for any unforeseen problems.

If you do own the game, have some time this week to test it, and you want a beta key, please contact me at owner at hanakogames.com with information about your order (a receipt email, or the email address you registered to, or a picture of the box if you got it at a con, or whatever) so I can follow up.

Read More
Description
Release date: May 2009
The school is under attack, and only the Science Club can save the day! Guide a group of schoolgirls as they fend off an alien invasion in this turn-based RPG. Cross time and space, use your science skills to blast enemies with fire and lightning, and cast out the demons of stupidity.

"The story is bizarre. The characters are creative, and the dialogue is well written. The battles are unique, and the whole idea of the game is pretty fresh. Science Girls is a concept that doesn’t revolutionize anything, but is still distinctive. ... Don’t let the big-eyed anime ladies and the cutesy style of Science Girls fool you. It’s a great RPG, and it’s accessible for just about anyone. If that isn’t enough to convince you: it’s really cheap." - GameTunnel

"Science Girls! features some cute, almost throw-away dialog which has endeared me to the game a bit. I was particularly amused by their little in-game discussion of how the media and others tend to confuse correlation and causation. Like the Nethack gag, you pretty much have to be a geek yourself to "get it," which makes me wonder a little bit about the actual intended audience. But hey, if one person playing this game suddenly decides to give Nethack a try, or begins to understand how the media twists the facts, it'll be awesome." - Tales of the Rampant Coyote

This game is already complete and on sale for PC, Mac, and Linux, available at {LINK REMOVED}http://www.hanakogames.com/science.shtml

For more information visit that page (for a free demo) or the TVTropes entry - {LINK REMOVED}http://tvtropes.org/pmwiki/pmwiki.php/Main/ScienceGirls

Yes, I am a fulltime indie developer and yes, I already have a title available on Steam. This is from our back-catalog and we've had several requests to bring it here. Should it make it to Steam, there will be a price drop and existing customers will be given free Steam codes. The game runs about 5 hours long on average although I've seen people take twice that by grinding a lot. It is *not* hentai, but expect a few jokes (some slightly suggestive, some extremely geeky). It is also rather in need of a graphical update. Should it be voted through, the first thing we will be doing is hiring artists to revamp all the battle effects. You can always use more BOOM in the lab, right?

tl;dr - Schoolgirls fight aliens with the power of SCIENCE!
< >
514 Comments

Overjoyed to see another of Hanako's games greenlit! Awesome job, Hanako and everyone who voted for it!!

Science Girls has been Greenlit and is now listed in the Steam store. For the latest information, purchase options, and discussions for Science Girls, please see it on the Steam Store or in the Steam Community.
Visit Store Page
For more details Visit Community Hub
For latest discussions
If you really, really want to, you can continue to the Greenlight page. Information on this page may be out of date, since all the action has moved to the areas noted above.