Greenlight > Games > apsyse's Workshop
Greenlight is being retired. For more information on how to submit games to steam, refer to this blog post.
This item has been removed from the community because it violates Steam Community & Content Guidelines. It is only visible to you. If you believe your item has been removed by mistake, please contact Steam Support.
This item is incompatible with Greenlight. Please see the instructions page for reasons why this item might not work within Greenlight.
Current visibility: Hidden
This item will only be visible to you, admins, and anyone marked as a creator.
Current visibility: Friends-only
This item will only be visible in searches to you, your friends, and admins.
Steam Marines
Description Discussions11 Announcements27 Comments479 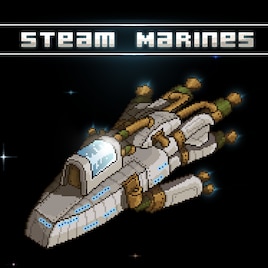 apsyse
Offline
See all 78 collections (some may be hidden)

View Steam Marines in the store

So close! Aieeeeeeeeeee! Congrats to those who made the cut :) 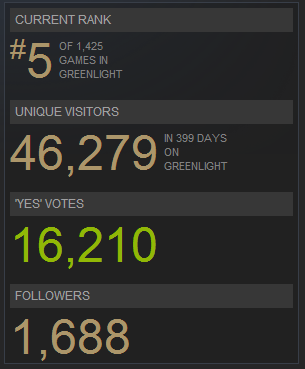 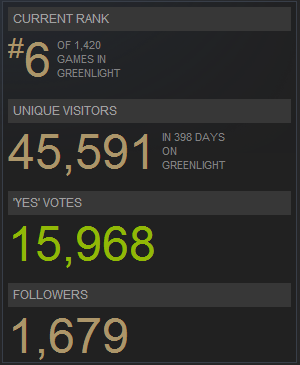 Just a small update to thank Jesse and Josh for their fine video which has pretty much single handedly pushed Steam Marines up quite a few steps on Greenlight! Thanks, guys! ^_^ 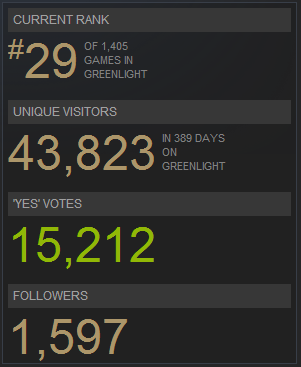 The Greenlight - Steam Marines
http://www.youtube.com/watch?v=tGfScEfzido
Read More
Description
Release date: 2013
You can now buy via Humble Widget or Desura on the official site[www.steammarines.com] for $7.99 USD! Steam Marines is also coming to Steam!


What is Steam Marines?
Steam Marines[www.SteamMarines.com] is a squad based Roguelike set on a steampunk spaceship. It features tactical play focused on positioning and careful use of resources, Steam Marines is built to keep you on your toes as you progress through the decks of your besieged ship, clearing enemies and trying to escape.

2D Retro Art
Pixels with attitude. The world of Steam Marines is steampunk, and the environment reflects a world of brass and copper, of mechanical mechanisms and engineering excellence. And guns.

Permadeath
Build your marines up into long range or up close death machines, but don't expect any mercy. Death is permanent and if a marine falls he's gone forever.

Turn and Squad Based Gameplay
Command up to four marines, each with their own gear, talents, and Action Points. Positioning is critical - even a lone enemy can be lethal! Use your Scout to sight and snipe or your Grenadier to funnel enemies into a choke point and blow them up!

Procedural Generation
The steampunk spaceship is composed of multiple decks you must progress through. Different environments and creatures await, and you'll never know for sure what lies beyond the next corner.'

State of the Game
Steam Marines is for alpha sale via the Humble Widget and Desura![www.SteamMarines.com] In the coming months on approach to beta I hope to fully implement Space Weather, more Decks so the player can pick a path through the levels, bring back Mission Objectives, and deepen each marine class!


A Note on Moderation (i.e. deleting comments)
This is apparently a touchy spot with some people so I'll state this outright - I've deleted exactly zero comments thus far. This is more a testament to how polite the responses have been, both positive and negative, than any indication of my behavior. You guys and gals are awesome!

What are people saying about Steam Marines?

Originally posted by Joe Fisher, IndieGamesAAA.com:
There are a lot of tactics. It's such a brutal game and it makes it even more brutal that you didn't realize how brutal it is when you start. Then you realize you died because you made one, literally one, wrong move.

Originally posted by Kevin Read, TheIndieHut.com:
Steam Marines is a dark and compelling game, which will force you to learn to play the hard way and make you deeply regret every mistake you make.

Originally posted by The Wargamer:
Players must control their Steam Marines and try to get as far as possible through the ship’s elaborate, procedurally-generated levels. When I say “try”, I really do mean it.

Originally posted by Indie Love:
The controls are a little difficult to understand, but it feels very polished for an alpha version of a game. The soundtrack is great, too.

Originally posted by Indie Game Mag:
Worthless Bums have been working on Steam Marines for some time now and every update it seems to get better and better with this being no exception.

Originally posted by Indie Impressions:
I loved the music, art, and the old-school “X-Com” vibe, but unfortunately my ignorance of the genre definitely gets in my way a bit. I have no doubt though that this will find it’s target audience and they will be very excited by the potential displayed here.

Originally posted by @SpooderW:
Steam Marines, the (real) roguelike from @Worthless_Bums is now able of have money thrown at it! http://www.steammarines.com/ EMPTY YOUR POCKETS!

Originally posted by @TehWarstoriez:
I TRIED IT ON NORMAL AND COULDNT MAKE IT PAST THE FIRST PART. Y U DO DIS

Originally posted by @AntStiller:
Does your space game let you blast badguys into the cold depths of space with a shotgun? No? Maybe that's because it's not Steam Marines.

Originally posted by @happionlabs:
Why wait? This scratches my Space Hulk itch (and I personally prefer the pixel art.)

Originally posted by @mikelovesrobots:
I bought Steam Marines and thought it was worth my dollar. (You can use that as a testimonial if you like.)

Originally posted by @FedoraG4mer:
You'll find paintings that act as grenades, Lasershots, medkits... WHY DO PAINTINGS EXPLODE AND HEAL PEOPLE?

Originally posted by StomeGames:
"Steampunk turn based tactical rougelike" You might as well have just said "Tits, beer, pizza, and ice cream." because that's the only thing that -might interest me more.

Originally posted by @Jake_Ries:
I think it's a good game to sit back and play, make your brain work, make your brain twerk, and make you kind of feel bad for murdering your soldiers here because you're so bad at the game.

Originally posted by Opasx:
this feels like playing space marines RPG and the DM is a butthole

Originally posted by @hailtonothing:
FREAKING SPACE-GOBLINS WHY DO THEY EXPLODE WHEN THEY DIE WHY DOES STEAM MARINES HATE ME SO MUCH

Originally posted by Jesse Cox:
IT WAS A DOOR. IT CAME OUTTA NOWHERE.

Originally posted by @RichStanton:
I like Steam Marines a lot. 1st level: "This is a piece of piss." 2nd level: Death Became Me.

Originally posted by @KactusOTP's four year old daughter:
It's really hard for me to play it but for now daddy can have it.

Thank you for reading!
Popular Discussions View All (11)

ToastGhost Oct 26, 2013 @ 1:46am
I remember playing an early demo and thinking it had great potential. I'm glad to see it greenlit and looking polished like their gun-metal protective armor.

FPS Oct 19, 2013 @ 2:59am
Just played the demo. It lacks some sort of tutorial or on-screen hints. And maybe some interface buttons for keyboard commands (not sure if it can be played by mouse only).

apsyse  [author] Oct 18, 2013 @ 5:48am
@Chizu Yes, I will although probably not till early November. Content added, price will move up, but all previous buyers will get Steam keys :)

Are you going to be releasing as an "Early Access" release? I'd assume you are since you've used a similar method so far in giving purchases alpha/beta access.

Can't wait for the final product.

Incidentally you will of course get a Steam key if you purchased SM via Humble Widget - that's not a requirement, either!

Steam Marines has been Greenlit and is now listed in the Steam store. For the latest information, purchase options, and discussions for Steam Marines, please see it on the Steam Store or in the Steam Community.
Visit Store Page
For more details Visit Community Hub
For latest discussions
If you really, really want to, you can continue to the Greenlight page. Information on this page may be out of date, since all the action has moved to the areas noted above.