Greenlight > Games > Melos Han-Tani's Workshop
Greenlight is being retired. For more information on how to submit games to steam, refer to this blog post.
This item has been removed from the community because it violates Steam Community & Content Guidelines. It is only visible to you. If you believe your item has been removed by mistake, please contact Steam Support.
This item is incompatible with Greenlight. Please see the instructions page for reasons why this item might not work within Greenlight.
Current visibility: Hidden
This item will only be visible to you, admins, and anyone marked as a creator.
Current visibility: Friends-only
This item will only be visible in searches to you, your friends, and admins.
Anodyne (available now!)
Description Discussions3 Announcements24 Comments979 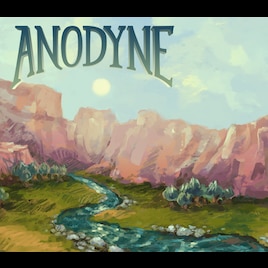 even_kei
Offline
See all 75 collections (some may be hidden)

Achievements work on all platforms. Cloud saving only on Windows and Mac (can't get it working on Linux, sorry). And a completion rate stat so you can compete with your friends!

Just in time! This means that we're ready to release and just waiting for Valve to give us a release date.

(As a side note, Linux started to work only after I had finished my schoolwork for the quarter...hmm.)

Read More
Description
Release date: February 4th, 2013
In Anodyne, you explore and fight your way through nature, urban and abstract themed areas in the human Young's subconscious, evoked by a 16-bit-era visual style and a moody, dream-like soundtrack.

The player moves between rooms 160x160 pixels in size, an intended constraint that we used to create the monster-filled dungeons you will navigate and the set of nature-based (and sometimes stranger) places you will explore.

Use coupon "GREENLIGHTSTEAMTIME" at our Fastspring store ( https://sites.fastspring.com/anodynegame/instant/anodyne )for 15% off!!!! (But in exchange, tell 3 of your friends about Anodyne!) We'll get you a Steam key if it gets greenlit!

Anodyne is a game made by two folks, Sean and Jon. We'd love to get greenlit...and be able to continue creating worlds for others to explore. So hear us out...

Buy the game at anodynegame.com and pre-order the soundtrack at seagaia.bandcamp.com/ Anodyne is available for Windows, Mac and Linux that support Adobe AIR 2.6+[get.adobe.com]. You can buy it at our website, Desura, and soon GamersGate.

Anodyne is developed by Sean "seagaia" Hogan (@seagaia2) and Jonathan Kittaka (@jonathankittaka) - steam ID kittakaj. Sean does code and music, Jon does art, and both split game design. You can also follow @anodynegame on Twitter. E-mail queries to anodynegame@gmail.com !

What some people are saying about Anodyne...

Originally posted by Mike Bezek, TruePCGaming:
"It is hard to believe that two college students put a game together that rivals one of the best Zelda games out there in the 2D plain, but somehow they out-Miyamoto’ed Miyamoto."

Originally posted by Jared Rosen, IndieStatik:
"Yet saying that Anodyne is a simple Zelda knockoff would be a mistake for a number of reasons, the most glaring of which is the substitution of a save-the-princess story for bizarre psychopomps and solipsistic explorations of the human condition."

Originally posted by Sophie Prell, Penny Arcade Report:
"The game's sound design is the strongest facilitator of Anodyne's sense of dread and unease; the ambience and music give off an air of suspicion and danger, with ugly chords and disquieting, unnatural-sounding synthetic pings. It all adds up to a game where you're not sure who to trust, and you can't be sure of what's real."

Ask the devs anything!
Melos Han-Tani

[SOS] Toddimyre Mar 14, 2013 @ 1:52pm
I came from TPB to help Greenlight this game, but I'm a bit too late. Great job on this one. I love the old school graphics mixed with the updated play controls. The devs also have a great sense of humor in game. Can't wait to see this active on Steam.

Brunoff Mar 12, 2013 @ 12:33pm
Thank you for the reply in any case I hope that this will becaufe the game like this back stronger than before and it is obviously a good translate hoping that his can be done thank you
< >

Anodyne (available now!) has been Greenlit and is now listed in the Steam store. For the latest information, purchase options, and discussions for Anodyne (available now!), please see it on the Steam Store or in the Steam Community.
Visit Store Page
For more details Visit Community Hub
For latest discussions
If you really, really want to, you can continue to the Greenlight page. Information on this page may be out of date, since all the action has moved to the areas noted above.