Greenlight > Games > The Working Parts's Workshop
Greenlight is being retired. For more information on how to submit games to steam, refer to this blog post.
This item has been removed from the community because it violates Steam Community & Content Guidelines. It is only visible to you. If you believe your item has been removed by mistake, please contact Steam Support.
This item is incompatible with Greenlight. Please see the instructions page for reasons why this item might not work within Greenlight.
Current visibility: Hidden
This item will only be visible to you, admins, and anyone marked as a creator.
Current visibility: Friends-only
This item will only be visible in searches to you, your friends, and admins.
Residue
Description Discussions2 Announcements8 Comments169 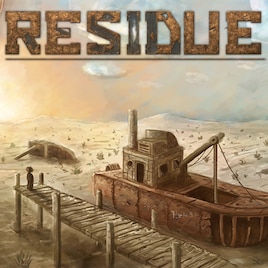 View Residue in the store

By far the most painful area of development was Nikolai's grappling hook mechanics. As I explained in the last post, I'm a sucker for turning natural motions into gameplay, so rather than going for a classic Worms-style grappling hook I wanted a hook that you actually needed to throw over things and have it attach on the opposite edge. The concept is simple enough and fits Residue well, and people usually go ”wow” when they first see it, but smiles quickly faded as the game started to demand precision and timing. We went overboard in a number of areas leading to an endless spaghetti code that we could never quite untangle ourselves from.

That is until we brought the axe.

In the Final Cut, we have removed some of the more complicated features from Nikolai's grappling shenanigans. It's fine. He won't need them anymore. After all, Residue isn't about the challenge. It's about taking the abilities your character has and using them to find the next piece of the puzzle and find out where the story is going. And so we have adjusted all of our level design so Nikolai has a labyrinth he can navigate with a much more graspable moveset.

In the old version there are four different throw directions – standard, high, far and down. With only a few minor changes to the world layout, we have been able to bring this down to just standard and down. (Nikolai wouldn't really need the ability to drop the hook either, but it comes in real handy in the water so we kept it). The new standard throw reaches slightly farther than the old, but not quite as far as the old ”far” throw.
We have also removed the ability to manually reel in the hook. Now the rope will extend until the hook hits something or Nikolai runs out of rope, and then it will automatically reel back in. Nice and simple. Finally, his ability to swing while hanging from the rope has been greatly reduced. Thanks to these cuts, we have been able to craft a level design where Nikolai's swinging isn't going to kill you over and over, isn't going to get you stuck. It's simply going to take you where you need to go.

One of the first things I would hear at every Residue playtest ever conducted was this: ”why do you need to hold down space to climb ropes?” To finally answer that, and why we are now changing it, I need to tell you a bit about myself.

Every director, regardless of their medium, has their own hang-ups. Mine is physicality. When I close my eyes, I see a 3D platform game where two feet can be controlled independently and where it really matters where you set them down – it would be simple and understandable (somehow), momentum-based and it would feel just like jumping around on the hills and mountains and forests where I grew up. I want players to move in ways that correspond more to motions I remember from my own life, and less to old-school platforming conventions. So even when I make games where story and atmosphere is king (as I most often do), I still seek that sense of bodily connection between player and player character, that physical sense of immersion.

That is what tempted me to put Emilio's dive in the game. By holding space in mid-air, Emilio rotates ever forward, throwing himself into the air in the hope of reaching something to grab onto – or land face-first on the ground. I wanted the player to embrace Emilio's careless nature, taking all these chances and ignoring the bruises that come with them. And with that, I wanted my player to hold on to the space bar for dear life, just as Emilio was holding on to whatever he was holding on to.

It would have worked in another game.

My games have often suffered from me trying to do too many things at once. And while the concept behind Emilio's controls is neat, in the context of Residue it really distracts more than it adds. For every player that gets into Emilio's mindset, there are two who are distracted from the story because they're too busy wrangling with the controls. Players who get stuck, fail crucial jumps because their feet don't work the way they're used to. I see that now. And the Steam release has given me the courage to go in and change it.

In the Final Cut, space is the jump button. There is no grab button, Emilio will dive automatically whenever he is in the air, grabbing anything he touches. Once grabbing, he will let go at the press of a jump button. It is more like classic platformers and less like Shadow of the Colossus. I find it's slightly less interesting this way, but it allows Residue to focus on its true strengths, and so the darling must die.

Residue is an intelligent, story-driven 2D platform adventure in which you control three different characters, exploring an abandoned excavation site in the remains of the Aral Sea in present-day Uzbekistan. Once the fourth largest lake in the world, the Aral Sea is now an arid wasteland, a victim of decades of Soviet cotton irrigation. To some, it is the prime example for humanity to stay out of nature's business. To others, it's a world waiting to be saved.

From the team that's bringing you They Breathe, also on Greenlight right now (+ demo)!
http://steamcommunity.com/sharedfiles/filedetails/?id=111699478


From every disaster, new heroes emerge. This is the story of a suicide mission, an impossible attempt at restoring the Aral Sea. In the late 90's, a disgraced Russian oil tycoon found an underground secret that could save the dry basin.
The sea would not be changed. But for the team assembled to work the miracle, life would never be the same again. Ten years later, the survivors' paths begin to converge. Something is pulling them back to the Aral Sea.

See every side of the story
Residue has a story itching to be told. We have done it in the way that only videogames can – by putting you in the middle of the action at all times. Resisting the temptation of a clear-cut protagonist, Residue carefully juggles you to let you see every side of the story, alternating between three characters with very different abilities - each one able to reach places the others can't - and very different ambitions. At times they help each other, at times they are in opposition. Sometimes both. Nobody said things weren't complicated.
Did we mention Residue is crazy about the little details? While the main story may take you between three to four hours to complete, you can search for hours for all the little hints and references to real world events, as well as dozens of hidden collectibles and all-round secret content.

Always in control
As you can see from our previous, much smaller game They Breathe, The Working Parts are devoted to telling stories in new ways while keeping gameplay at the forefront. That's why Residue isn't a point-and-click, but rather a visceral platform adventure where you're always in control, whether you're monkeying around the ship graveyard or diving through underground tunnels, navigating old Jumagul through dark corridors with a flickering flashlight, or ascending the side of the gigantic stranded drillship with Nikolai's makeshift grappling hook. Around every corner, Residue will show you something new.


UPDATE:
Please follow the official blog where we will post new videos, stories from development, gameplay details and of course, anything you ask for! The blog is here:
http://www.indiedb.com/games/residue

UPDATE 2:
The first blog post on IndieDB has me wondering how to best use Greenlight. Also, don't miss the excellent documentary from Al Jazeera that has inspired us greatly, and not only for Aral Sea research either. Link above!
/Hugo Bille, director

UPDATE 3
Residue's Graphics team tells you more about how they researched and worked with the real world setting, and shows you some of the locations and famous Aral Sea wrecks using Google Maps!
http://www.indiedb.com/games/residue/news/google-earth-adventures-a-virtual-flight-over-the-aral-sea

UPDATE 4
A new blog post has appeared! This time it's a more serious tone, discussing the topics of modernist vs traditionalist views, the importance of information, and being left alone.
http://www.indiedb.com/games/residue/news/people-of-the-lake

UPDATE 5
Our first game, They Breathe, has gotten its own Greenlight page. It also comes loaded with links to where you can try out its demo or purchase the full game for a scarce few dollars!
http://steamcommunity.com/sharedfiles/filedetails/?id=111699478

Residue has been Greenlit and is now listed in the Steam store. For the latest information, purchase options, and discussions for Residue, please see it on the Steam Store or in the Steam Community.
Visit Store Page
For more details Visit Community Hub
For latest discussions
If you really, really want to, you can continue to the Greenlight page. Information on this page may be out of date, since all the action has moved to the areas noted above.