Greenlight > Games > MightyCoop's Workshop
Greenlight is being retired. For more information on how to submit games to steam, refer to this blog post.
This item has been removed from the community because it violates Steam Community & Content Guidelines. It is only visible to you. If you believe your item has been removed by mistake, please contact Steam Support.
This item is incompatible with Greenlight. Please see the instructions page for reasons why this item might not work within Greenlight.
Current visibility: Hidden
This item will only be visible to you, admins, and anyone marked as a creator.
Current visibility: Friends-only
This item will only be visible in searches to you, your friends, and admins.
Saturday Morning RPG
Description Discussions6 Announcements7 Comments319 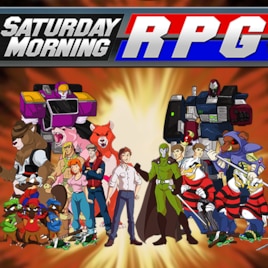 If you haven't seen it yet, Saturday Morning RPG is now available to purchase on Steam! All past buyers from Groupees, Indie Royale, and Desura should be able to retrieve Steam keys from their accounts on those services. I hope you guys enjoy the game!

Read More
We should be launching on Steam this month!
January 4, 2014 - Mighty Rabbit Studios

Just wanted to give you all a heads up that we will be launching on Steam this month! I've already got the game integrated with Steamworks and it's nearly ready for review - just fixing a few bugs caused by upgrading our engine.

I've got the game set up for the following features:
- Trading Cards (9 total)
- Achievements (74 total)
- Leaderboards (For Endless Battle and Episode Completion %)
- Stats

We attempted to support SteamCloud, but it wasn't as simple as we'd hope (as it would require switching saves from being registry based to file based). We wanted previous owners' old save files to function within the Steam version (and unlock all their previous cheevos on Steam). If we had changed the save system, this would not have been possible. :( If there is an overwhelming demand for SteamCloud, we'll try and work out some kind of system to support it.

Also, to reiterate everything I've said in the past: all previous purchases will receive a Steam key when we release. That means ALL Indie Royale, Desura, or Humble purchases. Thank you for supporting us! We owe you guys big time.

{LINK REMOVED}ZTGD 9/10 Editor's Choice Award
"For $6, Saturday Morning RPG is a steal for anyone who grew up with 80′s cartoons. The references will keep you smiling and the interesting combat will keep you playing. I can’t suggest it enough."

{LINK REMOVED}Hardcore Gamer 8/10
"Nailing those references and that innocently-entertaining atmosphere is precisely what makes Saturday Morning RPG so special. If you merely existed in the eighties, or have experienced things from that time, you’ll likely appreciate most every single bit of this love-letter to the era."

Touch Arcade Review 4/5 Touch Arcade Forums Game of the Week
“Saturday Morning RPG is as close to a physical manifestation of my childhood as I am
going to find, without a truckload of Pixiesticks.”

Gamezebo 4.5/5
“Finding all of the references is certain to be a favorite talking point for gamers
too. Mighty Rabbit did an excellent job working in tributes to all kinds of intellectual
properties from the 80s. It’s a satirical take, for sure, but one that has players laughing
along with their childhood memories, not at them.”

Pocket Gamer Review 9/10 Gold Award
“A heart-felt love letter to Japanese role-playing games and ’80s popular culture,
Saturday Morning RPG is likely to prove irresistible to anyone over the age of 30.”

Screw Attack
“This is seriously the coolest RPG that you need to pay attention to!”
“It will completely change your mind about mobile gaming as a platform.”

EDGE Magazine 7/10
“If you’re the right age to appreciate the irony of an over-powered Care Bear attack,
Saturday Morning RPG is going to take you right back to your distant past.”

USA Today – Portable Picks: ‘Saturday Morning RPG’
“The combat feels real good. Attacks are easy to execute, and the game provides plenty
of power-ups and magic spells to mix up the action.”

Eurogamer
“The real joy, though, is that undiluted hit of nostalgia. Even without official cartoon
licences, Saturday Morning RPG captures the spirit of school-free mornings spent in
Turtles pyjamas nursing a bowl of Coco Pops and basking in the glow of the TV.”

The Guardian
“Drawing inspiration from pretty much the full gamut of 80s, children's entertainment,
Saturday Morning RPG is a pixellated nostalgia trip for players of a certain age.”

If you don’t hate iOS and have a device, download that version of the game for free here
(please note, while the iOS version is free to play – the PC version will have all content
included with the initial purchase):

Saturday Morning RPG is also available on the OUYA!

andiegirl Jan 29, 2014 @ 1:25am
From their twitter: "Finally got the release versions of SMRPG uploaded to Steam and ready to go. We're all set for tomorrow!" So tomorrow then, thursday 30th! Yay!

Revolverhawk Jan 28, 2014 @ 10:53am
Will this be releasing later today, or on friday? Just curious, mildly tense with anticipation and all that.

Zipster Jan 22, 2014 @ 2:50pm
If this was purchased off the Groupees Retro bundle will we also receive a steam key based off this? Thanks!

Mighty Rabbit Studios  [author] Jan 22, 2014 @ 1:13pm
@Revolverhawk It's a single purchase for all the episodes. $5.99 was not an option for pricing when we went to set it, so the Steam version is currently priced at $6.99 which was the closest choice without going to cheaper. We will launch with a discount, so it should actually launch somewhere around $4.99.

The extra dollar will be well worth it for the extra Steam features (achievements, trading cards, leaderboards, stats, etc.).
< >

Saturday Morning RPG has been Greenlit and is now listed in the Steam store. For the latest information, purchase options, and discussions for Saturday Morning RPG, please see it on the Steam Store or in the Steam Community.
Visit Store Page
For more details Visit Community Hub
For latest discussions
If you really, really want to, you can continue to the Greenlight page. Information on this page may be out of date, since all the action has moved to the areas noted above.