Greenlight > Games > Waz's Workshop
Greenlight is being retired. For more information on how to submit games to steam, refer to this blog post.
This item has been removed from the community because it violates Steam Community & Content Guidelines. It is only visible to you. If you believe your item has been removed by mistake, please contact Steam Support.
This item is incompatible with Greenlight. Please see the instructions page for reasons why this item might not work within Greenlight.
Current visibility: Hidden
This item will only be visible to you, admins, and anyone marked as a creator.
Current visibility: Friends-only
This item will only be visible in searches to you, your friends, and admins.
WazHack
Description Discussions9 Announcements3 Comments449 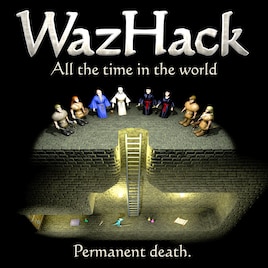 Waz
Offline
See all 50 collections (some may be hidden)

View WazHack in the store

Initially, only the Web version is available. You can play it now at: http://beta.wazhack.com/play
Once the Achievements and other stuff is integrated with SteamWorks, a first version will be available on Steam too!

This release adds 8 new classes - finally your favourite Roguelike actually has a Rogue class! Click the big yellow arrow on the character selection.

Each new class has brought a new major feature or upgrade to existing features, all of which are relevant to all classes. So while the Bard starts with a Lute, any character could find one (though they are rare of course). The Rogue and Thief similarly use Stealth, which is now much more relevant to how monsters notice you, regardless of what class you are playing. I'll leave you to discover the value of the other classes yourself.

Talents now must be upgraded together more - no more just going straight to level 3 on a single talent. This is to keep balance while allowing talents to be significantly more powerful at levels 2 and 3.

In the Guild Hall you'll find the new Achievements list - a good way to keep track of your deepest journey or for veterans to find a harder challenge or two.

There are also a few more items, and a few new monsters and changes, far too numerous and spoiling to list here.

I'm only one person so there will be bugs. I'm still nursing a broken arm, but I'll try to fix them as fast as you can report them. The best way to report bugs is via the in-game menu option (it sends a copy of your game for me to analyze). If the problem is more abstract or gameplay related, by all means start a discussion here, or on the Reddit Forum.

WazHack received a massive boost last week when it was showcased as a two-part video demo by Lewis and Simon at YOGSCAST. They're the largest game demo channel and #18 on YouTube, not to mention being hilariously funny.

The net result has been a significant jump in Greenlight votes, but we still need more! Tell your friends, and send them the link: http://steamcommunity.com/sharedfiles/filedetails/?id=92915872

Read More
Description
Release date: v1.2 available now. v1.3 imminent.
Time moves forward only when you do in the dungeons of WazHack, so you can take your time to solve problems instead of just spamming 'attack' and 'drink healing potion'.

You don't see it much in the all-action video above, but some of the most fun is had just standing still trying to work out how to get out of a sticky situation. Should you try that unknown potion? Maybe it's Healing? What about that wand? Maybe it's Magic Missile... or maybe it's a Wand of Create Monster, and it'll get even stickier!

There are many great gameplay videos on YouTube, such as the two-part review/demo by YOGSCAST:

You start with your choice from 8 character classes, each with different starting equipment and stats, but the game you play depends on what interesting loot you find. Maybe you'll find a great spellbook and put all your efforts into turning your uneducated knight into a master battle mage!

The multiplayer mode is a little crazy. Each player is actually in their own instance of the same dungeon. Players encounter the same monsters, but fight them individually. In co-op mode, players find different loot and may trade with each other whenever standing in the same place. In competition mode, players find the same loot.

If you have ever played NetHack or a similar roguelike, you will find plenty familiar about this game, but be prepared for a lot of surprises too.

The demo of version 1.1 can be played right now on {LINK REMOVED}http://www.wazhack.com (Windows/Mac). You can find the standalone Windows and MacOSX versions there too. Or search for wazhack on YouTube to see players' gameplay videos. A version of the game with simplified graphics has also been ported to iOS and Android.

Should the game get on Steam and you've already bought the Windows/Mac/Linux game elsewhere, you'll of course get a free copy on Steam. The game is under constant development, so stay tuned for more!
< >
449 Comments

Pave Feb 15, 2014 @ 11:38pm
I admit I hadn't been playing this game for awhile (had to clean up Desura and computer in general). But I am really happy to hear this game arriving to Steam soonish; I had loads of interesting times playing this game last year.

R3QUIT3D Feb 8, 2014 @ 3:06am
Is the Steam Beta close to an all access version? Have been lurking on Reddit for awhile but didn't see any new timelines for this or the iOS update. Very happy to see that controller support is in the works also!! Great game WAZ!!!!! I know it's only a matter of weeks now but still can't come soon enough!!!

[HOTSHEEP]attrition Jan 26, 2014 @ 2:59pm
I've spent more time playing this game than just about any other. Very addicting. Just trying to finish with one last class - sorcerous - she's quite difficult to keep alive past 2000 feet or so. I've won with just about every other class - including as a skeleton, a balrog, even as a battle lich. Love this game.

WazHack has been Greenlit and is now listed in the Steam store. For the latest information, purchase options, and discussions for WazHack, please see it on the Steam Store or in the Steam Community.
Visit Store Page
For more details Visit Community Hub
For latest discussions
If you really, really want to, you can continue to the Greenlight page. Information on this page may be out of date, since all the action has moved to the areas noted above.