Greenlight > Games > Reverb Publishing's Workshop
Greenlight is being retired. For more information on how to submit games to steam, refer to this blog post.
This item has been removed from the community because it violates Steam Community & Content Guidelines. It is only visible to you. If you believe your item has been removed by mistake, please contact Steam Support.
This item is incompatible with Greenlight. Please see the instructions page for reasons why this item might not work within Greenlight.
Current visibility: Hidden
This item will only be visible to you, admins, and anyone marked as a creator.
Current visibility: Friends-only
This item will only be visible in searches to you, your friends, and admins.
Cognition: An Erica Reed Thriller
Description Discussions18 Announcements20 Comments995 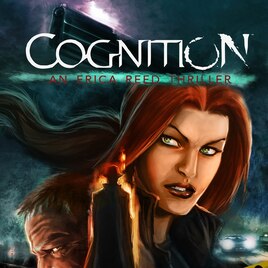 View Cognition: An Erica Reed Thriller in the store

The End Begins: It's official--on September 19th, Episode 4: The Cain Killer will be released, and we'll launch the full season on GOG and Steam!

You can check out new screenshots at our blog here: http://www.postudios.com/blog/?p=3287

And the new trailer here: https://www.youtube.com/watch?v=YUCZv7bWOZU&hd=1

PLUS! We've got a Live Launch Party happening on Sept. 19th, starting at 11 AM PDT/2 PM EDT on our YouTube channel (http://www.youtube.com/postudios), and will feature live Q&A with the directors and two special guests: Amy K. Browne, the voice of Cordelia Smith, and Jane Jensen herself! We'll be talking about Cognition, Moebius, the future of Phoenix Online, and doing some fun giveaways as well. We hope you can join us to celebrate!

Everyone here at Phoenix Online is incredibly excited and grateful to announce that we have been Greenlit!!

First & foremost, enormous thanks to all of YOU! Your votes, support, and helping us spread the word are what got us here, and we are very grateful indeed. We can't wait to get the game fully loaded on Steam and ready to go and into your eager hands!

From {LINK REMOVED}Phoenix Online Studios, the acclaimed developer behind the King’s Quest-inspired {LINK REMOVED}The Silver Lining, Cognition: An Erica Reed Thriller is an engrossing point-and-click adventure following Erica Reed, a Boston FBI agent haunted by the unsolved case of a serial killer who took her brother’s life. Taking a turn for the strange, Erica investigates her cases with the power of post-cognition: with just one touch, she can see an object's past. But when a John Doe turns brutally hanged, Erica starts finding clues left specifically for her. Who knows her secret? And what do they want from her?

One of {LINK REMOVED}{LINK REMOVED}IndieGames.com’s Top 10 Adventures of 2012, Cognition is not to be missed!

Engrossing Story: Penned by the designers of The Silver Lining and with Jane Jensen (Gabriel Knight, Gray Matter) as Story Consultant, Cognition is a narrative- and character-driven adventure that pulls you into Erica's world as the suspense unfolds over four Episodes.

Fully Voiced: A very talented cast of voice actors brings to life the diverse characters, including Raleigh Holmes of The Scarlet Furies as Erica Reed.

Challenging & Logical Puzzles: This game is easy to pick up and play, but it certainly doesn’t skimp out on the challenging aspects of puzzling. Uncovering clues and putting pieces together make for a trial of one’s intuition and savvy.

Award-Winning Music: Winner of {LINK REMOVED}Best Music in the 2012 Aggie Awards, from the editors and readers alike, Austin Haynes’ soundtrack is haunting and moving, and features the {LINK REMOVED}G.A.N.G.-nominated song “The Taking” by Robert and Raleigh Holmes!

Gorgeous Graphic Novel Artwork: Featuring the art direction of renowned comics artist Romano Molenaar (X-Men, The Darkness, Batman), the breathtaking, hand-drawn sinks you into the moody atmosphere of the narrative. Intrinsic to the atmosphere of the game, from a dark and stormy night in the cemetery to shady crime scenes to the vivid warmth of an antique shop.

What about Linux?
We are planning to do a Linux port! Cognition was developed in the Unity engine, and once we make the upgrade to their latest version (which supports Linux ports), we will be making this happen!

I already own the game, will I get it on Steam if you’re Greenlit?
Yes! Steam FAQ states that developers will be provided with keys for their existing customers at no extra cost.

I don’t want to wait for it to be on Steam, I want it now!
Did I mention yet that Episodes 1, 2, and 3 are{LINK REMOVED}available now? :)

My question hasn’t been answered!
Ask away in the comments below, or come visit our {LINK REMOVED}forums to find out more!

WHAT REVIEWERS ARE SAYING

"It is soaked with gloomy style, is gorgeous to look at and listen to, sets up its plot points with great precision, and
takes off in the third act as it builds to a huge climax with a disquieting final shot that makes me genuinely eager to
play the second episode.” – {LINK REMOVED}AdventureGamers, 3.5/5

“If you enjoy adventure games with a gripping story and great art, Cognition is shaping up to be a fantastic option." - {LINK REMOVED}Entertainium, 4/5

The story is filled with intrigue and suspense and will surely keep you interested with the good mix of puzzles and
investigative thinking along with the superb voice-actors and accompanying music.” – {LINK REMOVED}Video Game People, 9/10

"“Phoenix Online Studios’ first episode The Hangman is both an achievement in mature storytelling and great puzzle design. It is the spiritual successor of the Gabriel Knight series, but with its own unique ideas.” – {LINK REMOVED}FutureSack, 9/10

“Erica Reed is voiced to perfection … the soundtrack by Austin Haynes is scene-perfect every step of the way … César Bittar (with a little help from his friend Jane Jensen) and the folks at Phoenix Online Studios have crafted a story that is genuinely involving and extremely emotional …a truly incredible achievement.” – {LINK REMOVED}Alternative Magazine Online, 9/10

"An exciting story, an interesting main character, challenging puzzles, and a grandiose. atmosphere make for me this first episode a worthy spiritual successor of the Gabriel Knight series, which hopefully will be even better with each new episode. Besides The Walking Dead is the best for me so far (serious) Adventure game experience of the year." - {LINK REMOVED}Adventure-Treff, 85%

"The passion of the developers for their work is evident in every facet of the game, and there's a strong foundation here. The puzzle design is far more detailed than what you'd see in similar games ... The art and music are also inspired and make a strong case for the game. ... Ultimately, Cognition is a good start, and at its core, a quality adventure game. ... this series will be a sure winner." - {LINK REMOVED}RPGFan, 80%
< >
995 Comments

King in Yellow Mar 27, 2017 @ 3:22pm
Dev admited he had no interest in promoting his game any further now that he got our money.

Cognition: An Erica Reed Thriller has been Greenlit and is now listed in the Steam store. For the latest information, purchase options, and discussions for Cognition: An Erica Reed Thriller, please see it on the Steam Store or in the Steam Community.
Visit Store Page
For more details Visit Community Hub
For latest discussions
If you really, really want to, you can continue to the Greenlight page. Information on this page may be out of date, since all the action has moved to the areas noted above.