Greenlight > Games > AlejandroDaJ's Workshop
Greenlight is being retired. For more information on how to submit games to steam, refer to this blog post.
This item has been removed from the community because it violates Steam Community & Content Guidelines. It is only visible to you. If you believe your item has been removed by mistake, please contact Steam Support.
This item is incompatible with Greenlight. Please see the instructions page for reasons why this item might not work within Greenlight.
Current visibility: Hidden
This item will only be visible to you, admins, and anyone marked as a creator.
Current visibility: Friends-only
This item will only be visible in searches to you, your friends, and admins.
Cute Things Dying Violently
Description Discussions2 Announcements3 Comments456 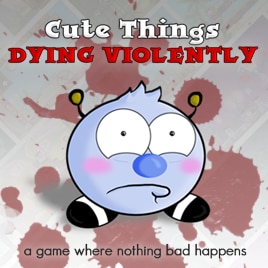 AlejandroDaJ
Offline
See all 48 collections (some may be hidden)

A lot's changed since this game got Greenlit. For one thing, it's no longer PC-only... CTDV will be released on Steam for PC, Mac, and Linux, as well as iOS and Android.

CTDV Steam will feature a some new graphics and items, a streamlined campaign, a Level of the Week feature, 24 Steam achievements, custom Critters, and Steam Workshop integration with the level editor for sharing custom levels.

The Steam version will come with a free copy of the Android release, *and* we'll be giving complimentary keys to existing Desura owners. Hope you enjoy it!

Read More
CTDV will be available on Windows, Mac, and Linux
May 19, 2014 - AlejandroDaJ

Thank you for helping me get Greenlit, everyone!

Since being on Steam will open a host of new possibilities, I took the past month to port CTDV from XNA (which only used to run on PC and the Xbox 360) into Unity 3D. The good news is that, thanks to Unity's new 2D sprite system, both versions look pretty much the same. The BETTER news is that this means that Cute Things will be available on Windows, Mac, and Linux. And... eventually... on mobile.

To see what it looks like right now, feel free to check out the CTDV demo in your web browser: http://www.apathyworks.com/temp/unity/ctdv/Web.html

Flick these hapless little buggers around to get them safely out of each level! Dodge all sorts of lethal goodies like spikes, buzzsaws, and fire, and use a variety of wacky items to pull it off. Play through 60 mind-bending, reflex-testing singleplayer levels, 6 bloodthirsty challenge levels, and 1 murderous bucket-headed robot! Want more? Try out the built-in level editor or shoot for 24 unique Achievements.

Currently available on Desura for $2.99 US and Xbox Live Indie Games for 80msp. Was part of the 2011 Indie Games Summer Uprising and was featured in the Indie Royale Back to School Bundle and an Indie Gala bundle.

Cute Things Dying Violently has been Greenlit and is now listed in the Steam store. For the latest information, purchase options, and discussions for Cute Things Dying Violently, please see it on the Steam Store or in the Steam Community.
Visit Store Page
For more details Visit Community Hub
For latest discussions
If you really, really want to, you can continue to the Greenlight page. Information on this page may be out of date, since all the action has moved to the areas noted above.