Greenlight > Games > DIT's Workshop
Greenlight is being retired. For more information on how to submit games to steam, refer to this blog post.
This item has been removed from the community because it violates Steam Community & Content Guidelines. It is only visible to you. If you believe your item has been removed by mistake, please contact Steam Support.
This item is incompatible with Greenlight. Please see the instructions page for reasons why this item might not work within Greenlight.
Current visibility: Hidden
This item will only be visible to you, admins, and anyone marked as a creator.
Current visibility: Friends-only
This item will only be visible in searches to you, your friends, and admins.
Syder Arcade
Description Discussions7 Announcements33 Comments672 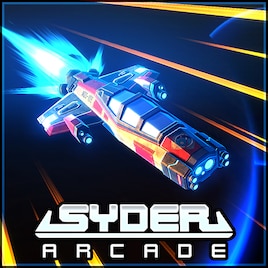 Studio Evil
Offline
See all 102 collections (some may be hidden)

View Syder Arcade in the store

It’s time to reveal the day when your race for the first place in the Steam Syder Arcade leaderboard will begin: set your calendar to October 24th and get ready to join us in our newly launched Community Hub!

With more than a year behind us it certainly seemed like we’ve crossed the universe in search of a port to call home, but now that day is nearly upon us. Many of you have supported us all this time, patiently waiting to see Syder Arcade getting greenlit, and we can’t stress enough how grateful we are.

As we already announced, we want to thank all of you planning for the next updates of the game some Steam features and upgrades that will be ready soon after launch. Remember that among these new additions we are preparing some special rewards dedicated to our supporters! Badges, cards, emoticons and new achievements will be immediately available at launch! We will wait for you to celebrate together in our Community Hub in a few days!

The Syder Arcade release date is getting closer and we are working to prepare as much additional stuff as we can to make your Steam experience complete. We are the first ones who love to collect cards, win badges and try to get all the achievements available. Here is a first sneak peek of two of the cards you will be able to collect!

We are going to show you soon more goodies (spoiler alert: we have emoticons too!). You can find more about what we are working on on our website[www.syderarcade.com]

Get back to some serious Old-School gaming with Syder Arcade!
A love letter to Amiga the games of the 90', no coins, no upgrade grinding, just your tenacity and a motherload of alien invaders.

Syder Arcade is a free scrolling, multi directional shoot 'em up, an uncompromised old-school experience, furious, challenging, straightforward. This game will bring you back in time, when bulky starships were cool and games were about player skill and swearing madly at your computer.

PixelProspector
Syder Arcade is a faithful tribute to shmups in general and to the classic Defender in particular. It feels like a lost classic with its challenging oldschool gameplay that impresses with fantastic 2.5D graphics and tight controls. Highly recommended for any shmup nut!

Greenlitgaming.com
Honestly, who isn’t a fan of some awesome side scrolling space shooter action? I can’t see a reason why it hasn’t been greenlit already!

RGCD.co.uk
A chrome-plated supercharged gunship of a shmup, and I can see Syder Arcade remaining on my hard drive indefinitely.

Bitmaiden.com
You might be thinking something like ‘Why would I play a game like this?’ Let us answer your question with another question: ‘why the hell not?’

Armlessoctopus.com
The brutal difficulty of Syder Arcade may put many folks off from it, but those who are familiar with the genre should be no stranger to adversity. The lush visuals, distinct feel to each ship, and variety of missions bring a lot to the table, and make this a solid addition to any gamer’s diet.

Darkzero.co.uk
A staple in the gaming libraries of longtime and recent gamers alike. Syder Arcade is visually incredible and the music and sound effects only add to the atmosphere that it generates.

Multiplayer.it
Studio Evil is able to bring back feelings we thougt possible only through emulators.

Zomby Nov 2, 2013 @ 6:44pm
Will those who bought the IndieFort Countdown Bundle get a Steam key? I checked on GamersGate and there's nothing yet.

robertblane Nov 2, 2013 @ 3:40am
Many thanks for bringing us Syder Arcade Version 1.51
This is a very different beast from the older version of 1.3, not only is this new version far more polished than ever before, the first level is vastly upgraded too! Numerous tweaks here and there add depth and just more "wow" factor to what simply is the very best shooter for the pc.
Thank you for the rebirth of the Amiga in the form of Syder Arcade. I am very honoured to have your product sitting on my hard drive and forever there it will stay. Please bring us more news on Shellcode and more of Reyes if you please?

Syder Arcade has been Greenlit and is now listed in the Steam store. For the latest information, purchase options, and discussions for Syder Arcade, please see it on the Steam Store or in the Steam Community.
Visit Store Page
For more details Visit Community Hub
For latest discussions
If you really, really want to, you can continue to the Greenlight page. Information on this page may be out of date, since all the action has moved to the areas noted above.