Greenlight > Games > LukaGameDev's Workshop
Greenlight is being retired. For more information on how to submit games to steam, refer to this blog post.
This item has been removed from the community because it violates Steam Community & Content Guidelines. It is only visible to you. If you believe your item has been removed by mistake, please contact Steam Support.
This item is incompatible with Greenlight. Please see the instructions page for reasons why this item might not work within Greenlight.
Current visibility: Hidden
This item will only be visible to you, admins, and anyone marked as a creator.
Current visibility: Friends-only
This item will only be visible in searches to you, your friends, and admins.
The Wishgranter
Description Discussions1 Announcements2 Comments95 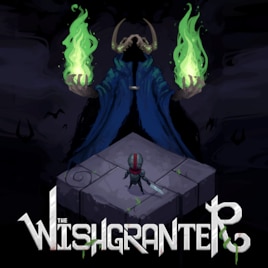 LukaGameDev
Offline
See all 8 collections (some may be hidden)
Recent Announcements View All (2)
Greenlit! What's Next?
May 25, 2017 - LukaGameDev

So the Wishgranter has been Greenlit in under a month and I have to say I was not expecting it to happen so soon! Thank you all for voting and spreading the word!

While I want to get the game out to you guys to play it as soon as possible I also don’t want to rush it and deliver something broken. Even if the game will first release as a Beta, I still want it to be playable, functional and have a decent amount of content.

Just as I have been doing for the past 3 years, I will be updating the development blog over on Tumblr[projectwishgranter.tumblr.com], and posting frequent development progress on Twitter. From now on however, I will be using Steam Announcements for a monthly list of updates and changes and to announce any big news.

Thanks again for all the support!

The Wishgranter had a great start on Greenlight with mostly yes votes and a lot of great feedback. I'm reading every comment and I'm blown away with all the positive feedback. Thanks a lot for your interest in the game!

As a first announcement on Steam I wanted to take a look at the first boss - The Lich.

The Lich is an ancient dark spirit that you'll find haunting the dungeons in The Wishgranter. It is capable of summoning the dead to assault you and keep you distracted while viciously attacking you using it's attacks (with a complete disregard for it's fellow zombies' lives).

It's corporeal body underneath it's blue cape moves around like tentacles which it can use for various attacks like an underground spike assault.

While The Lich is perfectly capable of hovering around ominously, it is also capable of teleportation using it's iconic green flames.

Being a particularly vicious enemy, you'll need to keep your focus and use a bit of strategy when facing the Lich, otherwise your dungeon run will surely be cut short!

That's all about the Lich for now, Thanks for reading!

Read More
Description
The Wishgranter is an Action Dungeon crawler inspired by Classic Legend Of Zelda, the Souls series & traditional Roguelikes with a focus on Replay-ability, Challenging Combat & an Engaging Non-linear Story.

Various heroes, fallen in battle & finding themselves resurrected in a town with no entrance or exit. A mysterious entity know only as the Wishgranter promises freedom and life in exchange for retrieving ancient relics from a depths below. Play as such heroes with no choice but to explore countless Dangerous Dungeons on a quest to get back to the real world and uncover the mysteries of the Wishgranter!

Currently in development for Windows PC.

WarChicken Feb 28, 2018 @ 4:33am
This looks really nice and brings back a lot of fond Memories from the SNES Zelda. I followed your game and will be a sure customer once you release it.

LukaGameDev  [author] May 14, 2017 @ 10:02am
@Dominik While I have not yet decided on a price range, I can tell you for sure it will not be free to play. I put a lot of hard work into this and a lot of time and there is still a lot of work to be done. If you're not willing to pay for the product then please vote no.

MeVII May 13, 2017 @ 8:59am
​@LukaGameDev
"you move on to a new character. However story progress and a lot of unlockables are permanent." Ah, I think I could manage that. Good to know!

"I do understand where you're coming from. Some people just don't like the concept of permadeath and losing progress." Have you ever read up on Bartles Taxonomy of Player Types? While not at all perfect, I think it is a solid foundation of information for devs to consider when they design their game.
< >