Greenlight > Games > Cloak and Dagger Games's Workshop
Greenlight is being retired. For more information on how to submit games to steam, refer to this blog post.
This item has been removed from the community because it violates Steam Community & Content Guidelines. It is only visible to you. If you believe your item has been removed by mistake, please contact Steam Support.
This item is incompatible with Greenlight. Please see the instructions page for reasons why this item might not work within Greenlight.
Current visibility: Hidden
This item will only be visible to you, admins, and anyone marked as a creator.
Current visibility: Friends-only
This item will only be visible in searches to you, your friends, and admins.
Football Game
Description Discussions0 Announcements4 Comments75 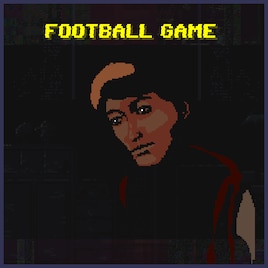 View Football Game in the store

Read More
Football Game - thanks for your support!
May 15, 2017 - Cloak and Dagger Games

Thanks for your continued support of Football Game - we have a healthy yes/no vote ratio and votes are still trickling in. Fingers crossed that we'll be Greenlit soon!

Just wanted to post a thank you to Adventure Gamers for recently featuring Football Game on their website - you can see their announcement here: https://adventuregamers.com/news/view/32597

Football Game has also been mentioned on Adventure Treff and Questzone.ru, we thank you guys for your support too!

The game was also featured on Jess Morrissette's "Video Game Soda Machine" project website - which is amazing by the way - check it out here: http://vgsmproject.com/category/football-game/

Read More
Description
Release date: 2017
A strange new point and click tale from the creators of A Date in the Park and Mudlarks.

East Bend, Purchase County. 1987.
You are Tommy. A local high school footballing hero, the town of East Bend is your playground.
It's game night for the Purchase County Turbines and your sweetheart is waiting in the bleachers.
Join Tommy for a night that you won't forget. Something is amiss... What are the features?

- An old school point and click adventure game aesthetic, with the puzzles and dialog interactions familiar to the genre
- A cast of odd characters, including friends, foes, teachers, and an unbalanced mother
- A twisted experimental narrative, with approximately 30 minutes to an hour of gameplay, depending on the player
- Original soundtrack by UK duo JUPITER-C Old school point and click adventures from the 1980s, 1980s American culture, the music and films of David Lynch How much will it cost?

Football Game is a short experience, and as such the price will be low. Expect the game to be approximately £1.50/$2.00 at most.

We also aim to localise Football Game in French, with hopes for Russian and Spanish localisations as well.

If Greenlit, Football Game will be released in late 2017.

Kurasiu May 16, 2017 @ 6:36am
It's always great to see an interesting adventure game on Greenlight. Voted! Best of luck with the production!
< >

Football Game has been Greenlit and is now listed in the Steam store. For the latest information, purchase options, and discussions for Football Game, please see it on the Steam Store or in the Steam Community.
Visit Store Page
For more details Visit Community Hub
For latest discussions
If you really, really want to, you can continue to the Greenlight page. Information on this page may be out of date, since all the action has moved to the areas noted above.