Store Page
Total War: WARHAMMER >  Workshop > Steelb_l_ade's Workshop
This item has been removed from the community because it violates Steam Community & Content Guidelines. It is only visible to you. If you believe your item has been removed by mistake, please contact Steam Support.
This item is incompatible with Total War: WARHAMMER. Please see the instructions page for reasons why this item might not work within Total War: WARHAMMER.
Current visibility: Hidden
This item will only be visible to you, admins, and anyone marked as a creator.
Current visibility: Friends-only
This item will only be visible in searches to you, your friends, and admins. 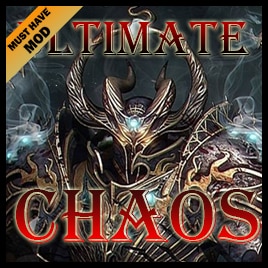 Steelb_l_ade
Offline
See all 649 collections (some may be hidden)
You need DLC to use this item.

ULTIMATE CHAOS AND ITS SUB-MODS ARE OUT AND CONTINUING DEVELOPMENT IN WARHAMMER 2!!

VERSION 2.3 OF ULTIMATE CHAOS RELEASED!
The next update for Ultimate Chaos is now out adding a round of bug-fixes, balance changes and new features including Chaos Sorcerors for all the gods!

Ultimate Chaos and it's sub mods are now updated for the Norsca DLC.
Enjoy and please consider supporting me!

If you like this mod and appreciate all the time that’s gone into it please consider supporting me so I can continue insisting to my wife that I don't need a real job and can continue making Total Warhammer content instead of doing boring stuff for money.
You can also make a one time donation instead of using Patreon!
I have a Paypal account (a non business one) So you can send your donations via paypal by clicking below!

Lords and Heroes of all four Chaos Gods including Daemons, each with custom artwork, icons, models, and skillsets!
Ditch those boring Exalted Champions and recruit Unique champions dedicated to each god with their own skills, playstyles, powers and actions - or go old school and play with the original undivided hero, now with Chaos Marks - or.. do both!
New Mounts for Lords and Heroes!
Rivalry and animosity between the gods!
Fully optimised for custom battles with four armies of the gods to use!
Completely new Chaos tech tree based around the star of chaos, with paths for all four gods and improvements to custom units.
All new revamped building tree with special god paths and unique chains for all the added custom units.

Over 100 new character skills to use with custom artwork.
Customise your undivided heroes with powerful Marks of Chaos.
Customised Agent actions for Champions of all four gods.
New innate abilities and skills themed at each different god for their lords and champions.
A whopping 120 new effects used for improving your troops, heroes and hordes.
Over 50 new units! All re-balanced and edited for conformity with all descriptions properly added in.
New Chaosified load screens.

Counter the Enemy Agents and see great distances with your Tzeentch sorcerers scrying the future. Use these heretics to further boost your research efforts plunging deep into the forbidden lore of Chaos, or obliterate your enemies in battle by outmanoeuvring them or blasting then with torrents of arcane bolts from these masters of magic!

Unleash great plagues upon the enemy armies sapping their strength and morale, grant diseased boons to your own troops with vile potions to keep the horde on its feet, or wear your enemies down in battle with poisoned weapons and infinitely regenerating, vomiting lords and heroes!

Dissolve your enemies will to fight with these depraved warriors, fast, deadly and armour piercing, these fighters are expert at dealing damage and moving quickly to smite down enemy heroes. Devotion to Slaanesh means these warriors won't be breaking from combat any time soon and with the lure of Slaanesh their enemies wont either...

Take the direct approach with these unsubtle but excellent killers. Slaughter enemy Agents on the campaign map to earn the blessings of Khorne, decimate your enemies in battle with frenzied murderous killers that excel in dealing pure damage. Lots and lots of damage!

Here is a list of the sub-mods I’ve designed to be plugged on top of Ultimate Chaos.
They are not required for it to work, but are recommended.

A great deal of effort has gone into this mod, really hope you enjoy it. It wouldn't have been possible at all though without some of the great mods created by the mod developers below. Be sure to check them out!

I’ve actually originally designed this to compliment my personal lists of mods so a few things to bear in mind:

#1 This mod should make the Chaos Faction very strong when compared to the others, therefore its designed to be played with the player as chaos running some kind of high difficulty mod.
I have designed two AI Sub mod's now specifically for Ultimate Chaos! You can grab them in the Sub-Mods section!
#2 Thanks to the busted autoresolver in TW:WH it will claim you have a ridiculous chance to win in every battle. Theres no easy way around this sadly, but try fighting the battles and it might not be as easy as you think!

Q: Will you make this compatible with "X" mod?
A: ***As of Version 2.0+ I will no longer be actively attempting to make Ultimate Chaos compatible with any specific mod, however it will continue to be written with maximum compatibility in mind and that's as far as I'm taking it. Other mod authors have taken this attitude and unfortunately I must now do the same or risk going insane.

Q: Can I use your tech tree/building tree/models/some other chunk of this in a different mod?
A: I actually got asked this within an hour of it being out.
Basically the idea of this mod is to create a big and chunky all in Chaos experience that you can then compliment by plugging in smaller mod-mods on top. Lifting chunks of it would defeat that purpose.
So basically, No, please don't.
Popular Discussions View All (8)

preponderantsamael Apr 12, 2022 @ 7:46pm
Defeating Chaos with this mod is impossible, I love the contents of the mod but they just way too overpowered playing against them. Please make another mod to tone their strength them down.

Monocled Dec 2, 2021 @ 7:11pm
I was about to stop playing this game before i found this, i am definitely going to try this

c-rasilainen Sep 6, 2021 @ 10:52am
Anyone else having an issue with sorcerer hero and fallen knights of chaos being invisible except for their weapons?

The Dutchman May 24, 2021 @ 7:36am
Is there a submod for just the artillery batteries? They're awesome and it'd be excellent as a standalone add-on as well

junglestrike Aug 12, 2020 @ 5:50am
so have a problem when trying to recruit chosen built required building yet it still says i need to build it and wont let me recruit them other then that love mod any ideas