Greenlight > Games > Kitsune Games's Workshop
Greenlight is being retired. For more information on how to submit games to steam, refer to this blog post.
This item has been removed from the community because it violates Steam Community & Content Guidelines. It is only visible to you. If you believe your item has been removed by mistake, please contact Steam Support.
This item is incompatible with Greenlight. Please see the instructions page for reasons why this item might not work within Greenlight.
Current visibility: Hidden
This item will only be visible to you, admins, and anyone marked as a creator.
Current visibility: Friends-only
This item will only be visible in searches to you, your friends, and admins.
Ultra Hat Dimension
Description Discussions0 Announcements1 Comments33 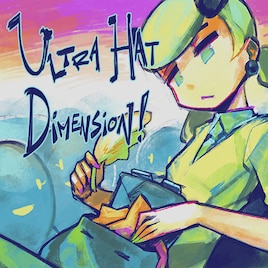 Thanks to your support, Ultra Hat Dimension has been greenlit! Expect it to come to Steam sometime late summer/early fall.

Read More
Description
A game about adorable hats and getting punched for wearing them.

Ultra Hat Dimension is a violent puzzle game in which the enemies are also the weapons. Use adorable hats to convince Spluffs of different factions to punch each other instead of you!

Bea is the first otherworlder to win the Spluff Kingdom's annual hat design competition. Unfortunately, a rival hat designer ruins the ball in her honor by casting a magic curse. Spluffs have been divided into factions based on which of Bea's hats they're wearing, and will only let Bea pass unmolested if she's wearing the right hat.

Ultra Hat Dimension was first released in December 2015 on itch.io, where it leaped to the top of the popularity charts in both the paid and puzzle categories. It currently has the following features:

The Steam version would have the following additions:

Get the game in its current state on itch[eniko.itch.io].

Listen to or get the soundtrack by Yuzuki on Bandcamp[yuzuki.bandcamp.com].

Read up on how to make maps and mods[kitsunegames.com] for Ultra Hat Dimension.

Stay up-to-date by subscribing to our newsletter[kitsunegames.com].

dcobco Apr 17, 2017 @ 2:38pm
Interesting concept. There're much potential in terms of gameplay and story. From the video, character movement speed seems a bit slow, and colour palette a little too eclectic. Mod support will definitely make the game last. Looking forward to its progress.

Raneforie Apr 13, 2017 @ 1:19pm
The use of colors in some level of this game is very interesting and it even offers customizing possibilities. Voted yes

Ultra Hat Dimension has been Greenlit and is now listed in the Steam store. For the latest information, purchase options, and discussions for Ultra Hat Dimension, please see it on the Steam Store or in the Steam Community.
Visit Store Page
For more details Visit Community Hub
For latest discussions
If you really, really want to, you can continue to the Greenlight page. Information on this page may be out of date, since all the action has moved to the areas noted above.