Greenlight > Games > antek's Workshop
Greenlight is being retired. For more information on how to submit games to steam, refer to this blog post.
This item has been removed from the community because it violates Steam Community & Content Guidelines. It is only visible to you. If you believe your item has been removed by mistake, please contact Steam Support.
This item is incompatible with Greenlight. Please see the instructions page for reasons why this item might not work within Greenlight.
Current visibility: Hidden
This item will only be visible to you, admins, and anyone marked as a creator.
Current visibility: Friends-only
This item will only be visible in searches to you, your friends, and admins.
Warlocks 2: God Slayers
Description Discussions0 Announcements5 Comments113

!nj
Offline
See all 12 collections (some may be hidden)

Yesterday evening after 28 days Warlocks 2: God Slayers got Greenlit.
Thank you all for your positive feedback, comments and votes. You're awesome! 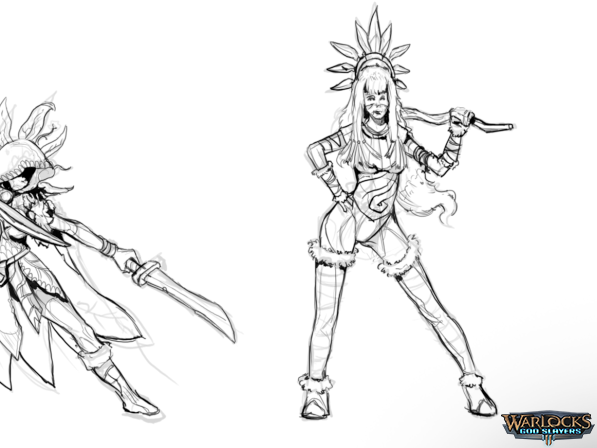 Kheera is a deadly Shamaness. She can serve well as a support in a group or go the solo assassin way, whatever play style you prefer. This is one of the characters that were featured in the prequel of Warlocks 2: God Slayers – Warlocks vs Shadows.

Here's a short article about the design behind Kheera - http://frozendistrict.com/2017/04/14/how-to-design-efficiently-for-indie-games/

Warlocks 2: God Slayers is an action-packed hack 'n slash experience with wizards and meteor showers. It's a sequel to our first game, Warlocks vs Shadows, which have also been released on Steam.

God Slayers is a brand new story, where our titled Warlocks now need to face the gods themselves, as apparently perishing the shadow monsters have angered them to say the least. The Order of Warlocks has been called to challenge the gods and dethrone them from their obnoxious mighty positions.


We'd like to introduce you the first three fundamentals of Warlocks 2: God Slayers gameplay.

We’ve learned a great deal while developing our first game. The thing that majority of our players praised the most was gameplay and combat. That in itself will only get more diverse giving players a legit class system with characters that you can level up and choose their skills with skill trees, a familiar system where you can bring up a little fellow that’ll aid you in battle.

We’re taking story seriously in this Warlocks game. You’ll be challenged with completing both main and side quests, all of them featuring compelling dialogue and novel gameplay elements. Fight with the band to dethrone the vile gods! Run with the giant Hamammoths and save the oppressed worlds! Help the Order of Warlocks withstand these challenging times.

The previous game featured small maps and arenas which didn’t leave a lot of room for exploration. This time we’re building actual places to visit with their own wild monsters to find. Each universe you travel through has its own inhabitants which behave differently when approached.

I have to say, though: I'm having trouble keeping track of the playable character him/her/itself. I'd advise perhaps adding an option to have an arrow over its head, or perhaps marginally thickening the outlines for it.

Best of luck on this; this is definitely one of the best-looking of games I've seen on Steam Greenlight.

Warlocks 2: God Slayers has been Greenlit and is now listed in the Steam store. For the latest information, purchase options, and discussions for Warlocks 2: God Slayers, please see it on the Steam Store or in the Steam Community.
Visit Store Page
For more details Visit Community Hub
For latest discussions
If you really, really want to, you can continue to the Greenlight page. Information on this page may be out of date, since all the action has moved to the areas noted above.